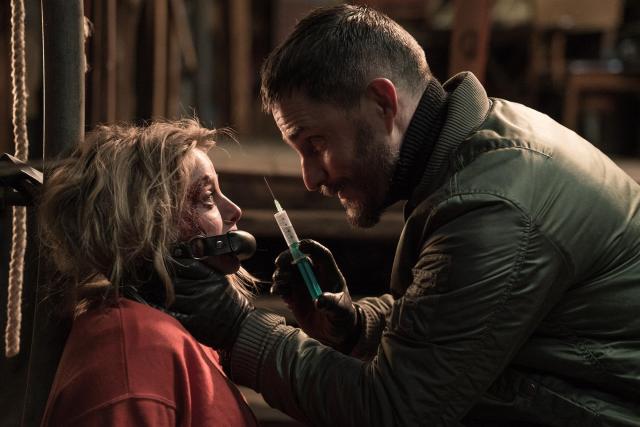 Perhaps it’s a national stereotype played out on the big screen. But the beginning of “Kidnapping Stella” is a veritable “How To” guide to carrying out such a crime, for the detail-oriented.

They sound and lightproof the van, install some U-bolts to, you know, handcuff the victim in place.

Then they soundproof an abandoned flat, bolt a bed to the floor, plastic sheet it for toilet or torture “accidents.”

They go digging in the woods.

No, they don’t show us EVERYthing. They sourced handcuffs, a gun, masks, hypodermics and drugs elsewhere. But they’re being thorough, grabbing their victim (Jella Hasse), screaming, on a remote city industrial block she walks on her way home.

The violence has a clinical, heartless feel. Vic slaps her to get her father’s email address and cell number.

“We are your only friends, now,” he tells her, in the least-comforting way possible — in German with English subtitles. They snip off her clothes for photos to send her father, leave her gagged and keep her degraded.

But Tom quavers at some of this. He won’t eat his chicken nuggets afterward. That’s when Vic shoves some in his mouth and calmly, cruelly, keeps them on task.

“Your emotions are suppressing your appetite. Means you’re thinking too much. You are having second thoughts.”

Thomas Sieben’s thriller has a few surprise twists, which I won’t give away here. Most, but not all, are well within the realm of possibility.

More than a few are melodramatic — mere plot devices designed to complicate a seriously simple tale — and melodramatic enough to make you roll your eyes.

There’s history between the two thugs, and history between one of them and the victim, who has inner resources that her crying and pleading for her life (she fully unloads in the video they send to her father) don’t cover.

And the deeper we get into it, the more violence we expect from “Kidnapping Stella.”

It’s just that the script lets us get two steps ahead of it, long before the midway point. And it never catches up and gets ahead of us again.

The performances carry it, with Schick suggesting a ruthless, callous Mark Strong villain in his turn and Hasse deftly managing to keep Stella’s cunning something she’s able to hide from her tormentors.

But the players can’t sprint ahead fast enough to keep us from getting to the finish line minutes and minutes before “Kidnapping Stella” does. It’s not bad. But it’s not surprising either.

Credits: Written and directed by Thomas Sieben. A Netflix release.