Movie Review: The Greek System takes it on the chin, and elsewhere in “Haze”

Posted on January 30, 2019 by rogerinorlando 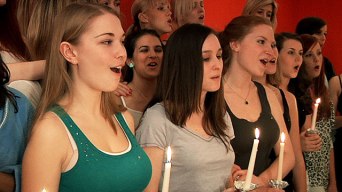 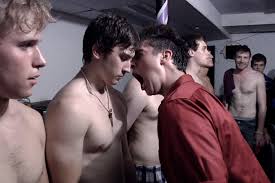 “Haze” is the best movie about the excesses of the Greek System that you’ve never seen.

An alcohol, coke and Moly-fueled fever-dream of rituals, tradition, group bonding and groupthink, intimidation, violence, vandalism, sexism and every other “ism” you can think of, it is damning in ways the frat bros cannot fathom. Writer-director David Burkman has rounded up and fictionalized moments that cover every shocking fraternity and sorority news or gossip item of the Internet age.

“Animal House” romanticized the booze-and-sex obsessed side of the college experience to such a degree that it single-handedly revived the clannish, clubbish, classist social clubs that date from the late 18th and early 19th centuries, developed because getting to go to college was no longer “elite” enough.

“Haze” takes a box-cutter to that, showing the depravity, soul-sucking amorality and personal and human cost of giving yourself over to the mob.

Burkman follows one promising freshman at an unnamed college, Nick (Kirk Curran), from Rush Week through Hell Week. It’s the promise of sex, epic parties that would make Bacchus envious and “lifelong friends…I want a family…loyalty” that has Nick pledging “I will do whatever it takes to get into this frat.”

The smirking brothers of Psi Theta Epsilon take that as a dare.

They’re the party house on campus, which is tricky as the campus has gone officially “dry.” A kid died during a fraternity hazing ritual the previous year. There are plenty of students who sneer at fraternities, along with phony contrite (and not contrite) frat bros who say “I don’t feel complicit” in the kid’s death, “Sir.”

The “sir” they say that to is Nick’s older brother Pete (Mike Blejer), an earnest upperclassman making a documentary about the Greek System and its role in that pledge’s death. That makes Pete the enemy of the Greeks. That forces Nick to make a choice. It’s his first test, and it’s one he fails — at least as far as his humanity, family loyalty and morality are concerned.

Nick has a female BFF from high school, Mimi (Kristin Rogers) who pines for him. But Psi Theta Epsilon promises a smorgasbord of sin. Why confine yourself to the girl next door when the compliant Delta (sister sorority) “mother” (Sophia Medley) and her sisters each fall under the understanding that they are the Psi Theta’s “sure thing?”

That’s the second predictable test Nick flunks on his “hero’s journey” through eight weeks of hazing, memorization of fraternity chants, mottos, creed and rituals while other students march to “Stop Hazing NOW!”

We drop into classes where Greek mythology, the psychology of “pressure to comform” and the like are explained to the sleepy kids who promptly drift back to The House to engage in peer-pressured over-drinking, drugs, vandalism and hate sex.

Mimi succumbs to the pressure to join a sorority. Nick finds himself having to prove his “loyalty” by betraying (and worse) his brother. And Psi Theta, with every passing day, sinks its claws deeper into him and drifts further away from the “right” side of “know the difference between right and wrong.” 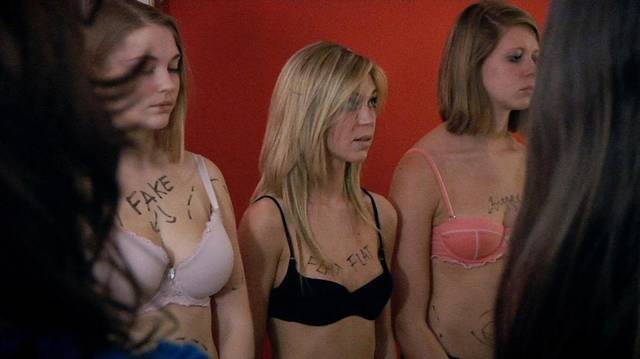 Burkman takes us in familiar directions, but repeatedly trips up expectations and fakes us out.

Just when we think we’ve seen it all, things turn uglier, with Nick and his fellow pledges intimidated into complying.

Carol Randolph plays the dead pledge’s mother, and her on-campus talk lets us see flashbacks of what her son went through the night he died. We see variations of that play out with Nick and the Psi Thetas — brutality, groupthink callousness, degradation and worse. Always worse.

I roomed with a rowdy TKE brother as an undergrad, and remember the stash of vending machine loot (a favorite group prank, busting into snack machines), designated drug storage, stolen (and archived) tests and class assignments, and raucus all-hours visits leading to parties he was dragged off to.

Dude, who made a quick trip from “nice guy” to “copycat jerk” in record time, flunked out his freshman year.

Whatever Bluto and Otter and the “Animal House” boys promised, that soured me on the Greeks for life. That, and a girlfriend who thought joining the “Little Sisters” of her college’s campus TKE chapter was a good idea. I knew what she was soon to find out.

But Burkman’s every-nasty-news-story-combined take-down goes far beyond that, sickeningly so.

He gets good performances out of his “students” and a movie that works as polemic and entertainment, a whirling, swirling, dizzying in-the-action no-budget jewel of hand-held footage and editing that if it offers few real surprises, sure as hell makes his point.