Posted on October 30, 2018 by rogerinorlando

Long before the Coen Brothers saddled up with “True Grit,” they showed a penchant for florid, archaic English, the speech of the characters of Western writer Charles Portis.

Think of “Raising Arizona” — “Edwina’s insides were a rocky place where my seed could find no purchase.”

“O Brother, Where Are Thou?” — “It’s a fool that looks for logic in the chambers of the human heart.

Not everybody prattles on through “The Ballad of Buster Suggs,” the Coens’ new film for Annapurna and Netflix. One chatterbox trapper (Chelcie Ross) gets labeled “tedious” for running on and on at the mouth because he so seldom has the pleasure of a human audience.

Then there’s the title character, played in the opening scenes by Tim Blake Nelson, showing off his crooning pipes in a way that “O Brother” only rarely allowed.

“I too have been known to violate the statutes,” his Buster offers a crusty barkeep who allows that whiskey is illegal in this corner of the desert Southwest. The shootout that follows, an under-estimated Chatty Cathy of a dandy, in cowboy clothes straight out of a Roy Rogers faux Western, dispatching several tough hombres and never losing his grin, can only be punctuated thusly.

“Puts me in mind of a sawwwwwng.”

And that opening — snippets of grandiloquent goofiness, graphic violence and the occasional song, is your test. No, it’s not a musical. But will you want to sit through two hours and twelve minutes of unconnected episodes, chapters from a (fake) titled “The Ballad of Buster Suggs,” or are you of a mind to spend your time more industriously, the importance of being earnest taken into account?

Because while every single chapter — “The Mortal Remains,” “The Gal Who Got Rattled,” etc. — has delights and reasons to enjoy it, they don’t tie together. It peaks early, and slogs a bit afterwards as we get the usual Coen grotesques, darker-than-dark humor, verbal dexterity that ventures into verbosity and their special brand of cruelty.

Every so often with this film, premiering Nov. 16, makes one wonder “OK, when do they end this? And how?” It doesn’t so much run its course as stroll it, petering out along the way.

We meet a solitary prospector (Tom Waits) looking for gold in pristine (until he shows up) wilderness, an armless/legless traveling orator, “The Wingless Thrush” (Harry Melling) performing at the behest of a hustler/manager/barker played by Liam Neeson.

A bank robber (James Franco) has a knack for dodging nooses, once when an Indian war party crashes his necktie party.

An unworldly young woman (Zoe Kazan) is tested by a wagon train West, not least by her affection for her brother’s dangerously/irksomely noisy Jack Russell terrier.

And a couple of swells from the British Isles (Brendan Gleeson and Jonjo O’Neill) regale and are regaled by their fellow stagecoach passengers (Tyne Daly, Saul Rubinek and that tedious trapper) as they transport a body overland to Fort Morgan. 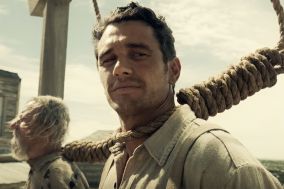 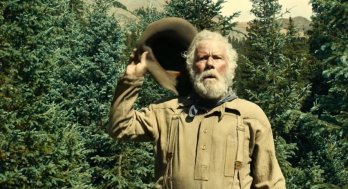 It’s not a musical, in spite of that adorably bubbly and then bullet-strewn opening, but no less than Neeson and Gleason add tunes to the proceedings. Waits? Of course.

The songs are variations of the saloon tunes of a hundred Westerns, most amusingly Nelson’s Buster re-wording the classic “Little Joe” from “Destry Rides Again” to suit the situation.

Nelson is the stand-out performer here, with players like Neeson and Gleason and Franco feeling a tad wasted in parts this small. Waits sparkles, and the Coens make great use of Rubinek, who slings a French accent as he pontificates on the nature of love and what’s deep within the human heart and such.

“Buster Scruggs” is as rich in detail as any of the better Westerns we’ve seen in recent years, from “Unforgiven” and “Deadwood” to “Open Range” and “The Homesman.”

The wagon that transports trapped Professor Harrison, “the Wingless Thrush,” is a classic theater on wheels, and his repertoire, ranging from Shelley’s “Ozymandias” to Lincoln’s “Gettsyburg Address,” Shakespeare to the Preamble to the U.S. Constitution, is exactly what traveling “orators” who weren’t Mark Twain would recite to the miners and cattle town provincials such performers regaled.

Indian warpaint is vivid and Remington painting real, prospecting is laid out in all its labor intensive tedium and peremptory hangings weren’t foolproof when all they had to work with was a horse, a tree, a rope and a prisoner.

The Coens manage a few Cinemascope-worthy Western vistas; Buster singing through buttes and canyons, an Indian attack that begins on the cusp of the horizon and a genuine wagon train — all images with beauty and scale that “True Grit” lacked.

Whatever working for Netflix did for their budgeting, not having to edit “The Ballad of Buster Scruggs” into anything tighter or more thematically coherent allowed them these little grace notes.

But I found i”Buster” to be a film that danced out of the starting gate and trotted or gamboled along, pleasantly and/or grimly ever after — perfectly watchable, probably more watchable in segments in the “Let’s put this on pause” comfort of your own home.

Credits:Written and directed by Ethan and Joel Coen. A Netflix/Annapurna release.