Posted on October 25, 2018 by rogerinorlando 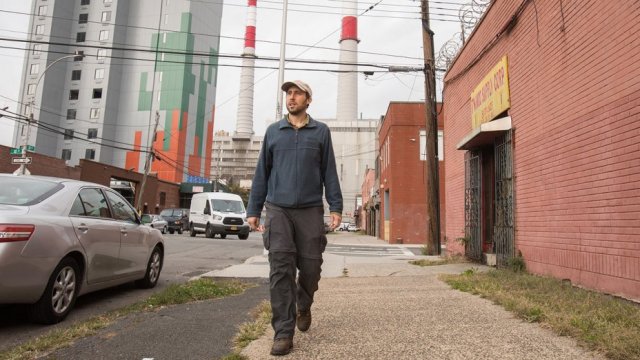 Matt Green is a natural politician.

Affable, a real “people” person, he can strike up a conversation with it seems like anyone he meets. He meets a lot of people in New York City, not known for friendliness.

Eight and a half million people living, working and getting around in a metropolis with over 8,000 miles of of streets, highways, park paths, piers and cemeteries, you’re bound to have a conversation or two.

That’s Matt’s six year quest, to walk all of those streets and byways. On occasion, a camera crew or newspaper or magazine photographer follows him, because Matt’s quest is quixotic and folks, not just the news people with him, are curious about it.

“Only in New York,” one friendly stranger guffaws.

“The World Before Your Feet” is a disarmingly charming documentary about Green’s walk, the people he meets and oh, the things he’s seen.

He’s a history buff, a nature lover, a cell-phone camera photographer and a writer with an eye for the poetic, creating accounts for his “I’m Just Walkin” blog of each day’s treks and the sites he saw — the “oldest living thing” (a Tulip Poplar), a “George Washington Passed Here” marker, the location of New York’s slave market, the spot where the first birth control clinic in the U.S. opened.

The 30something Green, in baseball cap and beard and on warm days, cargo shorts, could pass for any other Park Slope hipster. But the civil engineer who gave up a desk job to start walks (he hiked across America, first) is curious, informed and learning every day of his life.

Aimless? He hears “How do you earn a living” almost every time he describes what he’s up to. But here is a guy living lean (house sitting, dog sitting, cat sitting and staying with friends all over town), spending little on food and nothing else but time as he gives up a normal life for this one thing he really loves doing.

Filmmaker Jeremy Workman did the filmmaker portrait “Who is Henry Jaglom?” and the documentary “Magical Universe” about an obsessive Barbie doll artist, and turns out to be just the right guy to film Green’s odyssey. He is as disarmed as the rest of us by the man and makes sure to include the occasional “What are you doing?” and “Stop taking pictures!” encounter, to show Green’s natural charm winning over “real” New Yorkers.

Using the World’s Fair scale model, the Panorama of the City of New York, to orient us, Workman lets Green do almost all of the talking — a tour guide who relishes details that even the folks who live right next to them are unaware of. He’s marveling at Coney Island in mid-blizzard, stumbling into a pick-up football game during another snow storm (He’s invited to join in, and does.), waxing lyrical about curbside gardens, the city’s Redwoods — that’s right, Redwood trees — and figs.

Workman uses the occasional meditative drone shot to capture this stretch of abandoned Staten Island or the scale of this or that cemetery.

His movie is like a sweeter version of “The Cruise,” a documentary about the quirkiest of  tour-guide’s bus tour of Manhattan

Green gasps at sunsets, and reveals why there are little painted dots on sewer grates (city workers keeping track of which they’ve fumigated to stop the spread of the mosquito-borne West Nile virus.

On Day 1151, he does 15.3 miles on Staten Island. Another day he’s on Cobble Hill, or Vinegar Hill, down on Wall Street or over at Battery Park. Brownsville, Brooklyn to Oakwood and Crescent Beach, Staten Island — he’s not being particularly methodical about where he walks, though he is about recreating those walks for the blog.

The Jewish, Ashland, Virginia native  might note another “churchagogue,” a church that’s moved into a synagogue abandoned when its congregation moved away from the city.

The whole point of doing it might seem “To get somebody to make a documentary about me doing this,” especially in New York (The odds that a documentarian would contact you have to be pretty high, right?), but Green professes to see “no commercial possibilities” in a film or a book or even his little-visited website.

It just “seems important” that he finish this personal mission.

Interviewing others who love walking the city gives us few clues. A visit to Ashland and talking with his family is more revealing.

And chatting with an ex-fiance and ex-girlfriend, we learn a little about the cost of being “quixotic,” even if we envy the guy who has decided material things are not for him, who has mastered New York on $15 a day and who is redefining “a purposeful life” on the fly.

“The World Before Your Feet” suggests an entirely new way of visiting New York, or living there. As Green stops to take another picture of a 9/11 memorial mural, pauses to admire the Palmas de Caribe Community Garden and share a beer with the the retired Caribbean islanders gardening there, you can’t help but think “THIS is the way to SEE New York.”

And “THIS guy should run for mayor.”