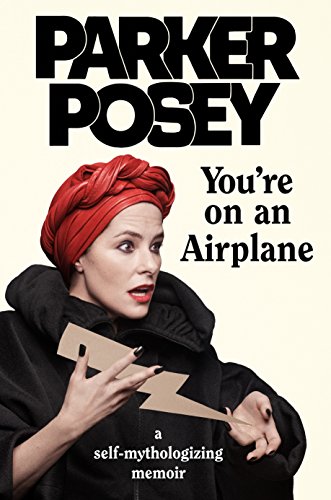 If you’re into her movies, you probably have a fairly complete picture of who Parker Posey is, what she’s like.

A little flaky, a little flower-childhish — sexy, but more of a goofy flirt a romancer, high maintenance but not in a vain way.

And that’s how she comes off in her new memoir, “You’re on an Airplane.” You have to endure the random, stream-of-dopey-consciousness first chapter to get on her wavelength, but one there, you’re on that airplane with her.

She loses cell phones constantly, weeps a bit more readily than might be healthy and has been in therapy for decades. She was pals with Nora Ephron, chummed around with leading ladies on the many films where she got to play the girl who doesn’t get the guy.

She wears a succession of Gloria Swanson “Sunset Boulevard” hair coverings in the photos, with a few shots of her Deep South Louisiana/Mississippi childhood and early years scattered hither and yon.

She drops a recipe in, every so often, this “fireball” drink and that staple of the menu of her Nonnie (grandma).

She talks about her experiences on sets, memories of that seminal moment in the career of more than a few actors of her generation — Richard Linklater’s “Dazed and Confused” — a painfully detailed look at her first Woody Allen experience (“Irrational Man”), a brief chapter on ALL her Christopher Guest films (what she’s most famous for) all but skipping over the indie-indier-indiest Hal Hartley years, which put her on the map.

Ever wondered what that first day or two working for Woody Allen is like, a director growing more tone deaf to the culture he purports to be documenting, infamous for firing actors on that first day or two because he’s hearing “his lines performed for the first time?” She re-lives doing 20 takes of a line reading for Allen, experiencing “the greatest living director’s frustration at my performance.”

He may be watching what you’re doing, but it is the headphones, where he listens to the nuances in his dialogue, that make or break you. He won’t let anybody wear blue jeans, even if the movie’s set at a college. He thinks “cool” and “grass” are “what the kids are saying these days.” You can hear it in every Blanche DuBois affectation in his scripts, and Posey confirms it.

“He said I was a terrific actress and a complicated woman but that he didn’t want to see any of that in his movie.”

There’s a touch of Kathy Griffin in her wounded pride, an endless progression of encounters with fellow celebrities and film world professionals, some of whom go to some trouble to pretend they don’t recall who she is.

“Remember? We worked together on…”

Her quick sketches of John C. Reilly, Joaquin Phoenix, Michael Shannon and others — some of whom she worked with, others she just meets and shares that actor’s concerned question (“How are you doing?”) with — are spot-on.

She gives us a great taste for the ups and downs of this Gypsy lifestyle, the tight budget you live on, the uncertainty that comes with turning 40 (for an actress), being hot enough in indie film one minute to merit a Time Magazine appreciation/profile that she mentions and I remember, because the critic writing it just salivated over her, and many years later, relieved to finally get a steady job on the Netflix remake of “Lost in Space,” just when she was thinking teaching might be her only option.

At 50, she doesn’t exactly name names of the many men who have crossed her threshold (Ryan Adams, the one famous person she acknowledges was her beau). For all the sharing, she doesn’t talk about her Lyme disease.

But we get a few marvelous chapters mostly devoted to Gracie, her Bichon/Poodle/Maltese unjustly (she says) dissed on the late-not-lamented gossip site Gawker, whom a pet psychic once told her was “a seven year old English girl in a previous life.”

There’s a dose of what her level of success means financially — modest New York apartments, a truck given to her by her car dealer/larger than life dad, a small house “upstate,” which she paints and fixes up a little herself, breaking her wrist in the process, right before her first Woody Allen movie.

She shares the brittle “Blade” experience with her fellow SUNY-Purchase alumni Wesley Snipes (he was being squeezed out of his franchise, and she was a witness/participant), talks at teasing length about working for Louis C.K. on his show. “I’m a monster,” he kept telling her. So he was. Not that he pulled anything on a woman of her experience and profile.

“Please don’t repeat this. I’m only telling you because we’ll never see each other again,” she says, not naming names but revealing that some “actors are like snipers,” messing with your head on set, or at events, screwing up your closeups, etc.

In an earlier age, a funny/sexy raconteur like Posey would have been a “Tonight Show” or “Merv” or “Dick Cavett” regular, simply for her stories. Now that the Netflix series has given her a new lease on life, she’s hot enough (again) to warrant a memoir.

But now that’s she written one that left a lot out, maybe she will take a cue from Shirley MacLaine (they did that Mary Kaye Cosmetics TV movie together) and write another, name a few names and find even more laughs at her own, and other film people’s expense.

young thoroughbred  She asked if I needed anything from her. I wanted a lobotomy and a tapeworm.

Allen’s cluelessness about vernacular, his dislike for blue jeans, even on college student characters