Netflixable? Of dogs and caged men and women in “The Free World”

It takes a special kind of compassion to work in an animal shelter, a place which tests your ability to give your heart to anything or anyone.

Something about Mohamed made Linda hire him.

Maybe it was his story. Back when he was named “Martin” Lundy, he was sent to prison for a crime he didn’t commit. It doesn’t matter what being locked up did to him, that his prison nick-name was “Cyclops,” because of what he did to another man’s sight. Mohamed, she realizes, “relates” to the animals imprisoned at Second Hope Animal Shelter.

Boyd Holbrook brings a quiet stoicism to Mohamed in “The Free World,” a tenderness to someone we’re sure is a very hard man. But Linda (Octavia Spencer, perfect) overhears him talking with the dogs, commiserating over “suffering” and the loss of freedom, knowing some of them are doomed. She knows she made the right decision, taking a chance on hiring a freed and exonerated man.

But in this part of Louisiana, it doesn’t pay to be “too” compassionate. Hard rural people who take out their frustrations on their pets are not unheard of.

“Ain’t no rules out here,” he complains.

“Things don’t get settled the way they do inside,” she counters. No matter how furious he gets, he has to maintain his passivity. He can’t show it.

Especially when the redneck who beat a dog nearly to death is a drawling, law-unto-himself cop (Stephen Louis Grush). Even though his wife (Elisabeth Moss) is bloodied and hysterical, that badge means there’s nothing that can be done.

Mohamed? He has to go outside to re-center himself every time a dog is “put down.” Because he knows “killed” when he sees it.

But Mohamed’s compassion and his own liberty are tested more severely when the woman shows up, after hours, bloodied, drunk and hysterical. He takes her to his spartan apartment, lets her sleep it off. And the moment she’s awake she pulls a knife on him, no memory of how she got there, paranoid about what this stranger’s connection to her husband and his brotherhood of police might be.

She holes up and he figures out how she got there. She killed her brute of a husband. Consequences be damned, he’s going to protect her from that, stonewall the “Innocent, my ass” boys and girls in blue who question him.

“An innocent man, he don’t do what you did in lock-up.” 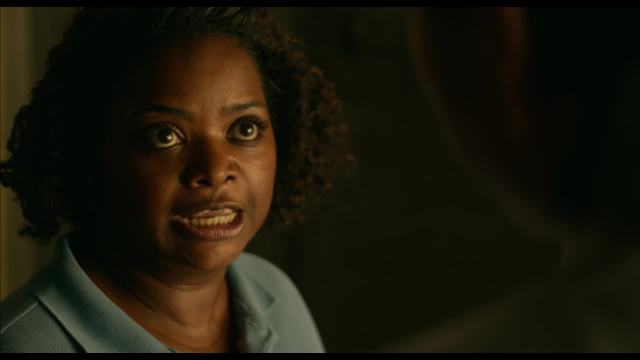 Holbrook, villain of “Logan,” hero of “The Predator,” has shades of Tom Hardy’s quiet menace from “The Drop” in his performance. Big, burly and scary, he is prison-conditioned to not let authority goad him, his survival skills (he hides a fork when he spies somebody watching him too intently in the diner) intact and perfectly paranoid.

Moss makes Doris borderline unstable, almost punch-drunk in the way she reels from what life has given her and what she’s done to avenge her suffering.

Writer/director Jason Lew, who gave us “The Experiment,” one of a couple of films about the Stanford Prison Experiment, succeeds when he keeps the film centered on one paranoid location, a tiny world with police, including a drawling, belligerent Asian detective (Sung Kang) closing in on them.

Any mistake could be disastrous for them both, prison time for her crime and his.

The film founders when Lew sends the couple, platonic and respectful (he is a Muslim, remember), on the run. That dash rather spoils the picture’s paranoid compactness, and it goes on and on, melodrama added unto melodrama.

But the performances are riveting. And does wonders for his case as the most masculine leading man of his generation, suited for hard men of action and softer-centered roles as well. If you can’t respect a tough man with a soft spot for dogs, there’s no hope for you any way.

MPAA Rating: R for some violence and language

Credits: Written and directed by Jason Lew. An IFC release.