The title “Where’s the Money” leans into the “plot” of this Andrew Bachelor comedy about trying to get cash from a bank robbery stashed in a flophouse that has been turned into a frat house.

Where the laughs lie are in its “fish out of water” gags — parking a black con man in a white frat house, “playing white guilt like Michael Jordan plays basketball.”

Bachelor, amusing but not the funniest guy in this thing, plays Del, a college age guy running his mom and dad’s gym, and going broke doing it.

Daddy (Mike Epps, antic and funny as ever) is in Folsom, stuck there after he and his brother (Terry Crews) got caught after carrying out a million dollar bank heist. Dad’s the one who sets his son’s plot in motion. And then he feels guilty about missing his kid growing up and reads him a bedtime story before sending Del on his way.

His MMA teacher pal (Kat Graham) and lowlife bud Juice (Allen Maldonado) are enlisted in the caper — get in the basement, dig out the cash.

But it is Del who, taking on the guise of Chet Buttersworth, must be kidnapped by frat guys who get lost invading the ‘hood in Klan robes to begin his initiation.

Klan robes? Well, as fraternities pre-date the Klan by decades, “the real question is, why is the KLAN wearing OUR robes?”

Del/Chet chases away other minority recruits to Kappa Alpha Chi (KAX) with a “token is broken” chant and proceeds to school assorted Partners in Privilege (Logan Paul, Josh Brener and Devon Werkheiser stand out) about how antiquated and racist frat rituals and nomenclature are.

A funny bit — Del becomes auctioneer for that fundraiser, “selling” people to rich white people outside of a “plantation house,” or as the frat boys re-label it, “It’s an AFFIRMATIVE auction!”

Less funny — Bachelor’s/Del’s attempts to teach the white boys how to do impressions of Denzel, Tyson and Cosby.

“The closest they’ve ever been to a black man is re-tweeting ‘Kanye.'”

Uncle (Crews) shows up, and having played cuddly the past several years, doesn’t have “Scary Terry” in him any more.

But the son of wealth Brock (Werkheiser) goes by “Barack” when he spits rhymes, and all the falling-over-themselves attempting to be PC or at least inoffensive, are amusing.

“Ghetto” is OK, because “I’m drawing an economic distinction, not a racial one.”

Trying to find Del/Chet’s house in that “ghetto” neighborhood — “Man, Chipotle’s got VALET now?” — forces the frat bros to avoid “all y’all look alike” racism, especially not to a car full of gang bangers (Method Man is their leader).

“His skin tone is right between you in the front and you in the back.” 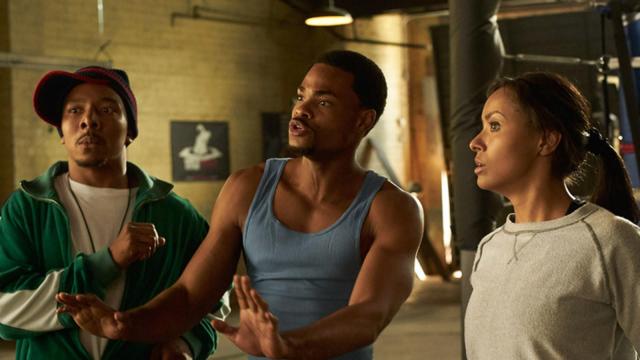 Scott Zabielski, producer of Comedy Central’s “Tosh. 0” and “The Jim Jefferies Show,” and a couple of screenwriters whip up a few R-rated one-liners, a couple delivered by the trash-talking kids Del is supposed to be teaching how to “use your words” to avoid fights, in the MMA class his gym offers.

“Never thought I’d get this close to a vagina until I was at least 10.”

None of which is helped by hanging this contraption on the Canadian Bachelor (TV’s “King Bachelor’s Pad”), who isn’t the most deft at delivering a one-liner. He looks and comes off as a half-speed watered-down Chris Tucker 2.0.

Wait, can I say that?