Posted on September 4, 2018 by rogerinorlando 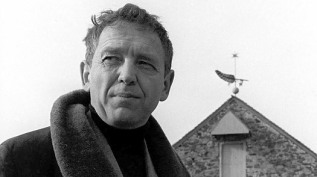 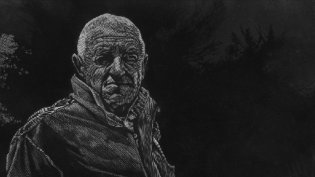 Long before his death in 2009, the painter Andrew Wyeth had to deal with “dead white male” dismissals.

A painter of “extreme realism,” whose skill matched his talents, and whose subtlety got lost in mass popularity, high priced sales and the sneering of the New York art establishment, this son of a famous illustrator found himself too often lumped in with the likes of Norman Rockwell — “sentimental,” a “kitsch meister” — at least among the art world’s opinion makers.

The ebb and flow of his critical reputation is aptly summed up by simply checking the running time of the “American Masters” documentary devoted to him (premiering Sept. 7 on PBS) and the recently-repeated 2016 “Masters” on abstract contemporary painter and collage artist Eva Hesse.

Hesse, important in the art world between the East River and the Hudson and really from the years 1965-70, a Holocaust survivor, pretty, died young — merited an hour and 45 minutes of film. Wyeth, the most important American painter of the last 75 years? A humbling 53 minutes.

Nobody “saw” like Wyeth, sitting on the hood of his Jeepster, sketching in the woods, farm fields and shorelines of rural Pennsylvania and Maine. Critics might praise his “un-paralleled draftsmanship,” as if the training, practice and tendency to “work on it until it couldn’t be better,” as his wife put it, was some sort of disqualification for serious consideration.

Painting to him, Wyeth said in a 1970s TV interview, “is a matter of truth…and maybe of memory.”

He rambled through Chadds Ford, Pennsylvania and Cushing, Maine and environs, peeking into stoic, occasionally tragic farm lives, fisherman’s work, at nature and into the psyche of his subjects. His first famous piece, acquired by the Museum of Modern Art later, “Christina’s World,” shows a woman, a disabled neighbor, seemingly crawling to what looks like a haunted, possibly abandoned farmhouse on the horizon.

Wyeth experts — family, contemporaries, scholars and curators — compare his compositions within the frame to the more celebrated abstractionists like Rothko and Pollack, And Wyeth’s personal history is sketched in, his courtship of wife-manager Betsy, the way his art changed when his father’s life was cut short in a car accident that also killed his young nephew.

And so he did, from the dead deer he contemplated in the forest the way the poet Robert Frost might have, had he taken up a brush, to his African American friends in Pennsylvania, to the mysterious model “Helga,” subject of a vast collection of scandalized nudes that came out late in his life. 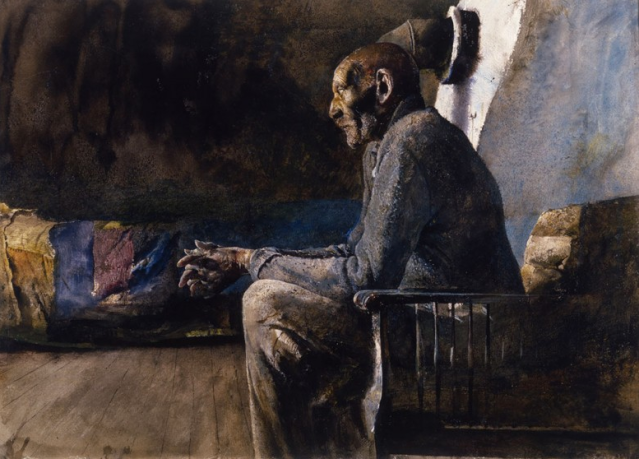 Many many paintings and drawings are shown, a few dissected, their inspirations and antecedents revealed.

His “conversation with” his contemporaries in the art world, carried out via the canon, is a little undeveloped. One can wonder if the Rauschenbergs, Pollacks, Rothko’s, Kusama’s and Hesse’s didn’t chase attention through their more expressionistic/impulsive “express my feelings” works simply because they knew they could never compete with Wyeth, whose works still bring onlookers to tears in the museums where they’re displayed.

Popular or not, it’s an amazing body work, poignant, symbolic and stunningly skilled. And it’s why he’ll be cherished in ways mere market-chasing collectors of his more abstract contemporaries never will.

1 Response to Documentary Review: “Wyeth” on “American Masters” on PBS