Posted on September 2, 2018 by rogerinorlando 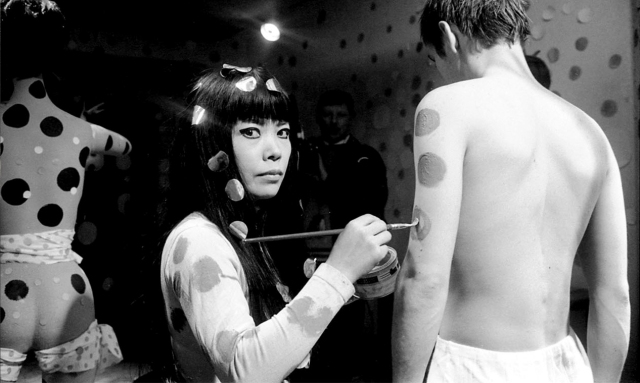 In art, the story of the artist, their “journey,” trials and narrative can often overwhelm the work itself.

That was never going to happen to Yayoi Kusama.

She might be an art product of wartime Japan, a publicity hungry provocateur of the New York of the ’60s whose failure to break through led to suicide attempts.

She might have been “rediscovered” in a Japanese mental institution — still drawing, painting, sculpting, collaging and polka-dotting away.

But the scale of the works, the innovations, the stark originality, no matter how many Oldenbergs and Warhols stole her Big Ideas, was never going to drown in “The Artist as Tragic Figure,” “The Creator as Brand.”

Almost. But not quite.

Kusama is an artist of rare obsession,, a woman “traumatized” by something which happened in a poppy field in her youth in Matsumoto, scarred for life by stumbling upon her wealthy father, in flagrante delicto with one of his many paramours. idolizing George O’Keefe, craving attention, recognition and fame so much she risked infamy and humiliation.

“Kusama: Infinity” captures the most famous female artist of the day at her peak — right now. And it remembers the 89 year-old’s half century of struggle, her artistic journey from watercolors to “infinity nets” — vast paintings of dots that challenge the viewer to decide where to look and wonder why may lie beyond. She created mirror rooms to display her soft sculptures (a cloth “accumulation” sofa now at MOMA, white-cloth-covered rowboat), matrices of flashing lights to further her explorations of the visual infinite, human bodies covered in polka dots. We see how she is ending her career as well, with large scale ceramics and the coiled fury of her anti-war collages, created in her twilight years.

At long last, when galleries from Japan to New York long refused to give her the time of day, when the only way she could get into MOMA (Museum of Modern Art) or the Venice Biennale was to crash the show with 1500 mirror balls which she rolled around in wearing first a kimono, then a leotard, when her nude art “happenings” once only got her arrested in New York, her work is selling for staggering numbers — millions. 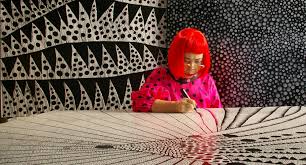 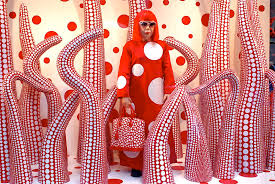 Heather Lenz’s documentary relies mostly on Kusama, in her own words, speaking mostly Japanese about her life and the trials of her career. Experts, key friends and eyewitnesses to her slow rise recount the desperation, the many stunts she pulled to get her art — gimmicky in size and scope– noticed.

For much of her career, she has been Miró on a Christo scale, at least in ambition.

And while the psychoanalysis of an obsessive-compulsive creative’s mania and outlets for those obsessions is interesting, it’s that primer on “How to become a famous modern artist” that’s most fascinating.

Asexual in the extreme, she shamelessly courted potential patrons, playing up her exotic foreignness — kimonos, Geisha hairstyles — carried on a generally chaste affair with reclusive much-older artist Joseph Cornell for the attention and, in increasing desperation to “break through,” dabbled in nudity and publicity stunts that irritated the power structure she was hoping would embrace her.

She says that “everything is a gamble, a great leap into the unknown.” But her contemporaries — even her champions, recall how “blatant” she was at grabbing notoriety, how “aggressive” she was in pursuing patrons. Still, these are soft-gloved smackdowns, as the film entirely takes her point of view. More contrary voices would have enlivened it.

Visuals vividly demonstrate how the Modern Art Game is played. Whatever medium you work in, you are your greatest creation — hair, costume, trademark “look,” brand and pose, all vital ingredients in getting noticed and getting famous. From Gauguin to Picasso, Pollack to Schnabel, titanic ego, along with obsession and talent, is a fundamental requirement of a career.

So does having a story. Being poor, somewhat unpolished and dying young did it for Basquiat. Being prolific, ironic and an albino marked Warhol for stardom. Genius figured in, of course. But what’s marketable is “story,” and the perception of value, the art world’s embrace of your originality.

With Kusama, the older she gets, the more interesting her “story” becomes. But what makes that story connect is the art itself — dazzling, overwhelming, mesmerizing and playful. All the obsession and depression, brazenness and brass in the world wouldn’t matter if she hadn’t had the goods, all along.