Roswell, New Mexico has nothing on Joshua Tree, California, when it comes to otherworldly weirdness.

Its exotic siren’s call was obvious years before U2 came to the place “Where the Streets Have No Name, decades before the singer Gram Parsons’ most devoted friends snatched his body and gave him the heroic cremation a future legend warranted.

Blame it on the remoteness, the silence so close yet so removed from the cacophony of Los Angeles, the trees so hairy their name was Biblical, but seers and prophets, nature lovers and flakes have congregated there forever.

One of the flakiest had to be George Wellington Van Tassel, aeronautical engineer and later “contactee,” a man who said he’d been visited by aliens.

He founded a desert airstrip, burrowed a cafe under “Giant Rock,” started picking up on what the desert and the aliens were saying to him and became guru to followers who helped him realize his alien tech vision — a life-extending, health-curing, mind-expanding, time-traveling domed gadget called the Integratron.

Van Tassel died in 1978, but his followers are still around, with young new recruits showing up in the unfinished dome to meditate and speculate on what it might have been capable of had he not died (“Mysteriously,” they suggest, a “stroke at 68,” the records show), his plans and some of his technology disappearing as he did.

“Calling all Earthlings” visits the Integratron, its caretakers (Nancy and Patty Karl), and many of those who knew Van Tassel. It plays snippets of interviews, including one long and in dept early ’60s TV chat with a West Coast station. 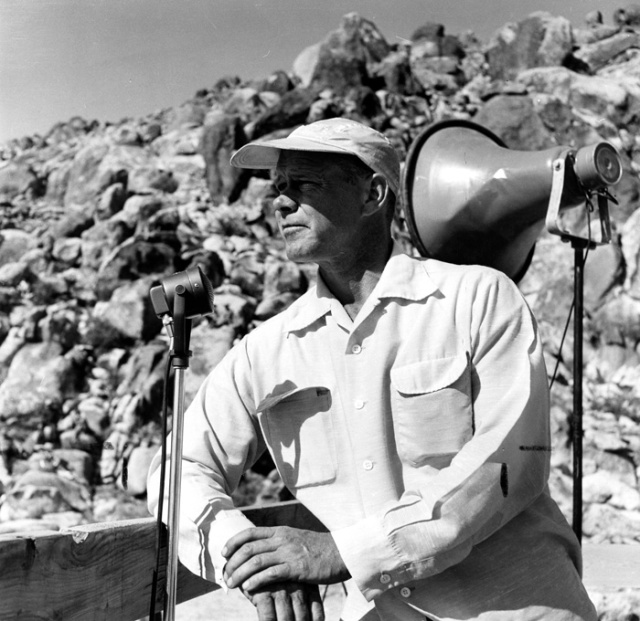 And filmmaker Jonathan Berman talks to those who knew him, those protecting his legacy, local cultists and the odd academic astrophysicist of historian who can place the man and the phenomenon within the context of California’s longtime allure to and tolerance of seekers, spiritualists and flakes.

“The currents…raise our consciousness” via Tesla science, the true believers declare. “I’ve seen some ghosts, but never no UFO” another local (Joshua Tree, 29 Palms and Yucca Valley are the locales) declares.

Berman finds them in parched, scorched trailer parks, taking a drink (and God knows what else) in the desert at night at Giant Rock, in the dome itself — built without nails, with a gigantic Tesla coil and split-ring resonator that would have given it, once it had its aluminum roof sheeted on, its oscillator and other gear operating, the appearance and sparks-jumping glow of an alien spaceship.

There’s no judgement here, so any laughs you have are of your own devising. They’re a funny lot, the devout and the doubters. Even the late USC historian Kevin Starr takes the subject seriously, parking it within ancient belief systems and modern California loopiness.

I couldn’t quite figure out why Eric Burden of “The Animals” is here. Perhaps Tom DeLonge of Blink-182 wasn’t available. The radio UFOlogist Art Bell was still living when this was filmed, and he is sorely missed as well.

But the people and the exotic places of “Calling all Earthlings” burn it into the memory. It reminds me of the desert dweller classic Plagues and Pleasures of the Salton Sea. If you’ve chosen to be there, that choice has some sort of oddball higher calling to it.

My only visit to Joshua Tree was after U2 and Parsons had given it pop culture currency. But that one trek made obvious its alien encounter allure. Strange lights in the night sky? Odd goings on? It’s no wonder Van Tassel started the first UFO believers conventions, holding them at Giant Rock all through the ’50s and ’60s.

A friend and I had just ascended a Joshua Tree National Monument peak when a roar and a blur of objects in camo green took our breaths away. A squadron of huge C-130 military transports were hurtling by, at treetop level, in the valley well below where we were standing — training for the Middle East, no doubt.

The huge Marine base at 29 Palms is probably responsible for some of the weirdness there, adherents of the dome admit. But even diving into Area 51 conspiracies don’t sugar coat it. Where’s the “mystery” in that, where’s the fun?