Spanish filmmaker  José Díaz Martínez wanted some time to himself, to reflect on his long-dead brother Tino and get away from the modern world.

And his wife and two kids as well, he doesn’t hasten to add.

So he set out to emulate American philosopher Henry David Thoreau. He’d go to his family’s ancestral farm, high in the mountains of Austurias, northwestern Spain, between Portugal and the North Atlantic. He’d spend 100 days with no human contact, just him and nature, just like Thoreau at Walden Pond.

“I go and come with a strange liberty in Nature, a part of herself,” as Martínez quotes Thoreau (in Spanish, with English subtitles) putting it. It’ll be a “zen” existence, lonely but introspective, he adds.

He’d live simply, in an ancient stone hut, hiking, keeping an eye on the horse, Atila, growing and harvesting potatoes like “The Martian,” planting vegetables in a homemade hothouse, keeping the pine marten (weasel) out of the henhouse.

He’d bring a pack and hiking shorts and jackets. And he’d bring GoPro cameras, tripods and much heavier gear. And a drone. He’d talk to those cameras (as well as provide poetic voice over narration later). Like, um, “Survivorman.”

“100 Days of Solitude,” produced by the same company that gave us  “Cantábrico,” also shot in the Cantabrian Mountains, is a gorgeous nature film that reminds us that even if America “invented” national nature parks, Europe and the rest of the world grabbed the idea and saved a few wild spaces as well.

Martínez hikes into the the nearby  Redes Natural Park, gorgeously remote, with mountain goats and deer, wolves, boars, owls, all of which he captures. For 100 days, he hikes and films he craggy mountain vistas, forests, waterfalls and wildlife, shooting time-lapses of a spider spinning its web, improving close-ups of owls in their nest.

He is adept with a camera (selfie) stick, showing himself trekking up mountainsides and down into places like the Felguera Valley,  attaching a camera to Atila when he decides he’ll let the horse tote his stuff on such treks.

And he talks, a lot, about “the cold, the sky and the solitude.” Truth be told, this off-the-cuff chatter and even much of his later-added narration is filled with poetic banalities. We get it. You miss your family (he leaves video recording cards at a “drop,” where they leave food for him so he doesn’t starve), but not work (kind of a “thing” in a country where unemployment ranges from 16-26%, and has for decades), not civilization or the city. 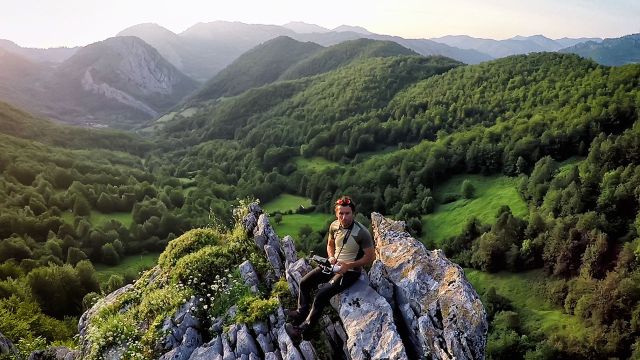 There’s something about the talking that somewhat spoils his “100 días de soledad,” but talking to oneself is no longer limited to cranks, so you get used to it.

The best moments in his film, though, are just nature observed — no titles identifying Cantabrian chamois (goats), the stags, boars and other species. Just nature, in the moment and in its element.

The sole bit of “action” in all this is the pine marten that breaks into the henhouse. Martínez needs the eggs to live, so he can’t have this. Whatever his background and connection to this piece of land, he’s got to figure out how to trap it, get it away from the nonplussed chickens, and get on with his days. It’d be a challenge for any of us.

But there are limits to the format, and to the viewer’s patience, that “100 Days” presents that Martínez can’t overcome. As lovely and striking as this place is, worth web searching to see about vacationing there, the drama it provides is entirely scenic — fog and snow and rain, seasons changing. And that’s not going to be to every taste any more than the tedious “I’m cold, there’s some pain” on-camera confessions.