Netflixable? Whatever you do, don’t rile “Romina” 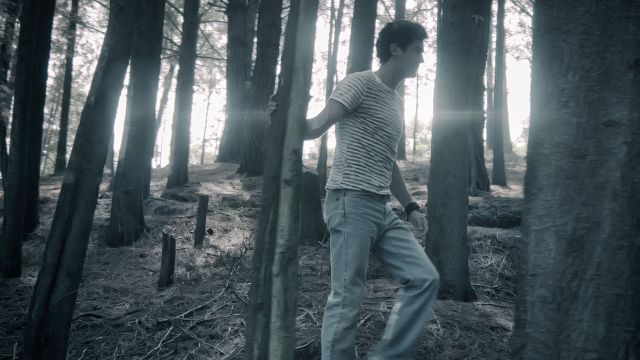 A silent girl , Romina, is debriefed by police (in Spanish, with English subtitles) for purposes of criminal and psychological evaluation. Something happened last June on Crystal Lake.

Wait, Crystal Lake? Isn’t that where Jason Voorhees carried out hockey-masked mayhem every “Friday the 13th?” They have a Crystal Lake in Mexico?

A lot of people died and the girl (Francisca Lozano) can only nod her head at the names of the victims. “Narrate the events,” her interrogator orders.

No narration ensues, thankfully. Just the camera tracking over assorted mutilated, bled-out corpses, a female survivor. “Pelicula Adolescente muerto,” you say to yourself. It has spread to Old Mexico for this cut-rate horror quickie, “Romina.”

Six college age pals set off for the lake, four guys and two women. “Camping,” they giggle,  because they’ve never googled the phrase “Crystal Lake.” And the playful, profane banter in the car gets around to Romina, “that freak of nature.” But only briefly.

They’re not alone at the lake. There’s no cell reception. The women? They’re spooked by the fact that “somebody is spying on us,” etc. Whoever “she” is, the lads like that she skinny dips.

Ezekiel (Victor Bonilla) wanders off by himself, Ramon (Walter Bercht) wanders off to find him. Sexual assault ensues.

In a 76 minute movie, there is virtually no space for dead time, scenes that bore or do little to leap right into the action and advance the plot. Writer-director Diego Cohen manages to find some. Lots.

“Romina” toddles along like a student film, kids accusing the park caretaker, cursing each other at their bad fortune, camera lingering over the lake and the trees. Oh, the trees. Here and there, we see other buildings — homes? Businesses? You know, places they could turn for help?

The performances are laughable. Suspense is dispensed with, “justice” in the retribution abandoned. Just a murderous, vengeful rampage with zero urgency or terror.

I want my 76 minutes back, Señor Cohen.

1 Response to Netflixable? Whatever you do, don’t rile “Romina”