Documentary Review: “Coming to My Senses” 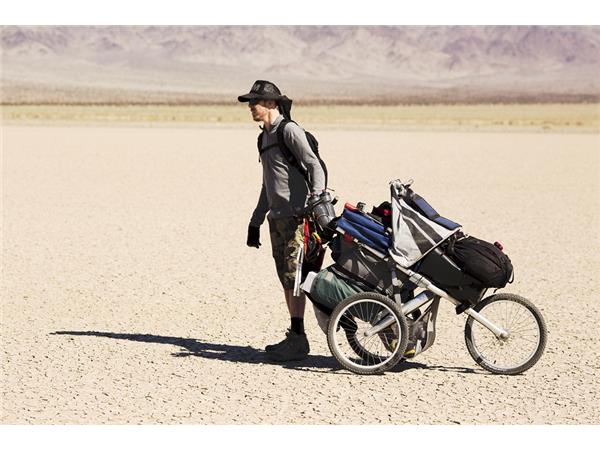 Aaron Baker was a California Motocross racer who suffered a paralyzing spinal cord injury at 20.

His doctors gave him “a one in a million chance of ever even feeding myself” again.

When he and his mother, Laquito Dian, questioned the prognosis, grasping for options, they were told “You’re not accepting reality.” As an athlete, he vigorously pursued a rehab regimen, only to be told by his insurer that coverage had run out.

But he found help from a kinesiologist named Taylor Kevin Isaacs. And over the course of 14 years — 14 YEARS — of work, he went from the shriveled 100 pound paralytic to a young man whose mother was “watching my son take his first steps, for the second time in my life.”

By the time we see him in the Dominic Gill documentary, “Coming to My Senses,” he’s pushing a supply cart on a days-long-trek across Death Valley, California.

“Senses” is a film and a cause. Should medicine be writing off people with paralyzing spinal cord injuries the way we have for decades? Baker’s is surely an exceptional case, an injury that made this remote possibility of recovery possible. An early visit, walking in to see and “inspire” somebody else with similar injuries does nothing for the patient, who dies. But others?

Being an extreme athlete, Baker’s focus and optimism is off the charts, and what he chooses to do, he pushes to the limit. “He feels most alive when he’s taken himself to the brink of death” is how his doctor puts it.

But if we’ve learned nothing from decades of Lance Armstrong documentaries, long odds can be shortened by gigantic ego, fanatical focus and endless financial support. And that’s what “Coming to My Senses,” the film, leaves out. The egoism of the athlete is here. After that “insurance runs out” and Mom falls into alcoholic (for a time) despair, what changed?

Baker crossed America with trainers, co-riders, a support van and a nutritionist. Writing this review from Florida, a non-Medicaid-expansion state with the fourth-worst health-care access in America, the obvious question is, “Who paid for all this?”

More to the point, who paid for the 14-16 years-and-counting rehab? How are they financing their Center of Restorative Exercise (CORE) project? Was there fund-raising involved? Is California the only state where this could have happened?

There’s no arguing that the film’s larger thesis, that one and a half million Americans with spinal injuries need fresh options, and that 35 long term care facilities nationwide isn’t enough to serve their needs.

But in a country where such care is increasingly a luxury that only the rich and well-connected (Christopher Reeve) can afford, maybe walking across the desert isn’t “drawing attention” to the real weak link in the system. It’s just drawing attention to the guy demanding and getting all the support that a million others have no hope of accessing. It shouldn’t be just about coming to “My” senses, but about coming to “our” senses.