Movie Review: The ever-so-fab “Gospel According to Andre” 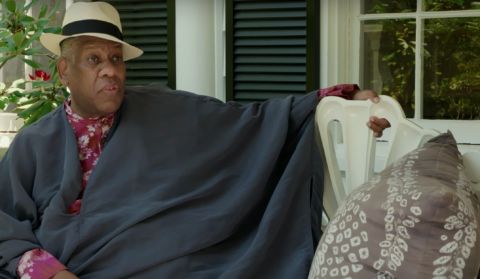 Talley has been High Priest of the Fashionistas for so long they should retire front-row center seating at every fashion show from now until Kingdom Come in his honor.

He has been hurling his breathlessly bellowed “Andre-isms” — strings of adjectives, “FASHION. Palace. Buckingham. Russia!” — into the firmament on TV, from the pages of “Women’s Wear Daily” and “Vogue,” and in films about fashion since Andy Warhol was with us, and Donald Trump wasn’t.

“I live for beauty and style,” he purrs. And so he does. A self-described “manatee” who adores capes and kaftans, bright colors and furs, everything shimmering and entirely over-the-top, he frets over flowers, advises everyone from Mariah to Michelle on “who” they should be wearing and makes himself a walking advertisement for fabulousness.

Kate Novack’s documentary “The Gospel According to André” captures the Lion of Design in winter, an editor emeritus, an eminence grise settling into his well-connected, high life dotage, reflecting back on what has been a singular career and a life lived in accordance with a poor Durham, N.C. kid’s wildest fantasies.

Talley, 68, was filmed in the days leading up to and just after the 2016 presidential election — kvetching and gossiping, consulting and reminiscing about a life that even he has to look over and ask, “How on Earth did I get here?”

Born in D.C., raised by a grandmother who was maid to a men’s dorm at Duke University, Talley’s first “fashion shows” were the black church of the American South. He describes these years as his version of Truman Capote’s sentimental story, “A Christmas Memory,” and we see the Capote parallels don’t stop there.

Friends from childhood, to grad school at Brown University (where he studied French) to the fashion world note how Talley, like Capote, created “a character” for himself to play, and played it to the max. From a Brown student newspaper to New York, where he volunteered his way into being “Vogue” editor Diana Vreeland’s assistant, to Warhol’s “Interview Magazine,”and on to Paris for “WWD” and then editor/right-hand man to Anna Wintour, Talley created the persona that stood out and opened doors.

He knows who made the biggest impact upon his life, from Bennie Davis, the “aristocratic” grandmother who passed on her love of hats and cleanliness, to Vreeland, whose mannerisms Talley affected almost from the moment he met her, to that first designer to take a shine to his flattery (Karl Lagerfeld). John Fairchild’s book on the industry, “The Fashionable Savage,” pointed him toward fashion. Barbra Streisand’s performance of “Second Hand Rose” tipped him where to shop and dress well, even before he was rich and famous.

As a teen, he’d lose himself on the pages of “Vogue,” awed by the first African-American models to appear there. His affinity for French gave him his entré to that world, and he made certain once he had a foot in the door that he was noticed — for his appearance, his uncanny eye and his flair for language.

Novack unnecessarily breaks her film into “acts” titled “Debutante” and “Black Superhero” and the like. But she gets at how Talley’s mere presence, tall and imposing and black and gay, in the front row of every runway show that mattered from the mid-70s onward, has made him a cultural and racial icon.

Not that he sought that. He absorbed the casual insults from peers just as he ignored the racist rock-throwing of his childhood. He made connections and worked his way to the top, tactless carping be damned. Don’t suggest he slept his way to the top of a very gay industry, because he has “never known love,” never had time for romance.

And always, he kept his eyes on that glittering prize — sophistication, notoriety, affluence and luxury.

“You have to hydrate yourself in beauty, luxury and style,” he says. And so he has.

Those of us who aren’t slaves to fashion have, if we’re open-minded and honest, passed through many stages of understanding André. That first time we saw him on TV? Ridiculous. Shallow. But by the second and third exposures, on chat shows and in films, you start to pick up on his wit, his encyclopedic knowledge of fashion history, his ability to zero in on what works, what will endure, his self-assured opinions and certitude of his status.

To think it’s all filtered through the lens of the segregated, working-class provincialism he grew up in is all the more impressive.

“The Gospel According to André” immortalizes a man of his moment, who invented himself and made his own moment. And as he winds down his career and takes a deep, sweeping, cape-bedecked parting bow, this self-flattering film biography gives us one last chance to appreciate what a trip he’s had, and what a trip he’s been.

MPAA Rating: PG-13 for some thematic and suggestive content