New-to-the-business Electric Entertainment Studios wisely chose to center all the advertising and hype for their serial killer thriller “Bad Samaritan” around the villain. David Tennant is the most popular “Doctor Who” of recent vintage, a regular of British TV and sometimes stand-out supporting player in Hollywood films.

And he’s the whole damn movie here, all lip-smacking, bug-eyed bad guy surrounded  by REALLY bad supporting actors. No kidding, if ever you see a doomed woman, held hostage by a “Silence of the Lambs” type act this unconcerned, or her rescuer show this little panic, and the cops he tells about the “Fifty Shades” of bondage, torture and murder chamber he’s seen demonstrate this little urgency, feel free to ask for your money back.

It’s a thriller directed by veteran producer Dean Devlin (“Independence Day”), and lacking all the cash and bloat his productions usually boast, he’s at a loss as to what to do with actors.

Fortunately, he has Tennant, diving into the birdlike obsessive paranoia of Cale Ehrendreich, a Maseriti-driving Portland prick who can’t help but be rude to the underlings. That turns him into a “victim,” robbed in the old valet parking scam. You know, they take your car, use your GPS to find your house and the car’s garage opener to sneak into it while they know you’re out for dinner.

The masters of this caper are Derek (Carlito Olivero) and Irish immigrant Sean (Robert Sheehan of “Geostorm”). Derek is the punk with moxie, Sean the soulful thief out to make that big score.

But ducking into Mr. Maserati’s house delivers a lot more than just a stolen credit card. He sees a massive lock, which he opens into an “office” with walls lined with black plastic and a beaten, lashed woman (Kerry Condon) strapped into a vast muzzling harness.

A further poke around reveals a butcher room where the bodies can be chopped up for disposal. What to do, what to do?

Can’t call the cops because you’ll incriminate yourself and Derek, can’t break her out without the monster’s keys, and any second now he’s going to want his Maserati back.

Devlin packs the picture with filler, shots that don’t advance the story, and barely manages to maintain forward momentum. He fails utterly to hold our interest via anything other than anticipation of the next time Tennant gets right up in the camera, bug-eyed, and insists on the “correction” of anyone who fails to heed his character’s perverse discipline.

“I’m just a GUY,” he insists, in a dandy American psycho accent. He most certainly isn’t.

Sheehan sweats when he’s supposed to, but surely the victim has some idea of what’s in store, enough to make her “What do you want with me?” not sound like an incompetent audition for the part of would-be kidnapping and torture victim. Neither of them brings the urgency and desperation necessary to rope us into the movie, into their predicament with them. 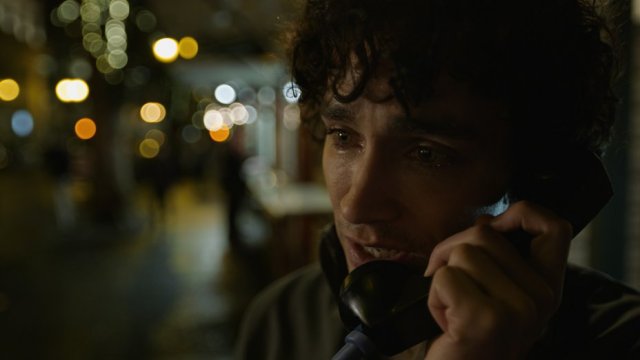 A parallel story about the FBI’s investigation of disappearances in the region is flatly played as well.

Great villains make good thrillers, Hitchcock said. But he had the good sense to cast empathetic and talented movie stars as his heroes and heroines, too.

Electric Entertainment had better up the acting wattage if they want to play with the big boys. “Doctor Who” as a serial killer is never going to be enough.

MPAA Rating: R for violence, language throughout, some drug use and brief nudity