Movie Review: Theron, Davis team up on the horrors of motherhood with “Tully” 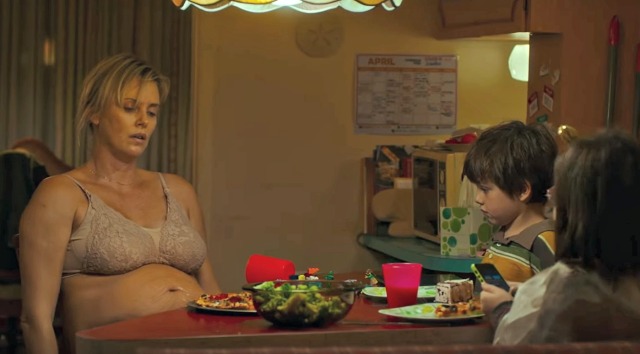 I must confess to being mostly immune to the charms of “Tully,” basically “Nanny McPhee” as filtered through the foul-mouthed whimsy of Diablo Cody.

Screenwriter Cody re-teams with her “Juno” and “Young Adult” director, Jason Reitman and they both take another shot at making Charlize Theron warm and funny (“Young Adult” ) with this somewhat upbeat wish fulfillment fantasy about an overwhelmed mother who gets help from an always-beaming, upbeat and nurturing helper in the guise of a hippy chick “Night Nanny.”

So as I said, “Nanny McPhee” with F-bombs.

But as the picture celebrates the horrors pregnancy and child-rearing visits upon the female body, and Cody muzzles her usual style under a script that lets Reitman just show us the trials of motherhood instead of having it explained to us in Cody’s trademark saucy, sarcastic banter, you go with it. Sometimes, anyway, even if you suspect Reitman is covering for a script that doesn’t pop the way “Juno” did.

Theron is Marlo, who’s just taken her third maternity leave and is so overwhelmed with the two kids she and Drew (Ron Livingston) already have that “What were they THINKING?” is never far from anybody’s mind, onscreen or off.

They have a school-age daughter who is already somewhat neglected, because their son (Asher Miles Fallica) is more than a handful for them, and for the posh private school they’re sending their children to.

The kindergartener melts down in a flash, flips out if Mom so much as drops him off in a different parking lot and utterly freaks at loud noises.

All this affluence around them and supposedly expert teaching staff, and nobody uses the phrase “on the spectrum?” Everybody calls him “quirky,” but we know better.

The house is a wreck, meals are frozen, and Marlo wears her disappointment with this life and her struggle on her face, her shoulders and eyes.

“Such a blessing,” she says of the pregnancy, not meaning a word of it. Tell her she’s glowing — it’s the law, after all — and she might just go off.

But Marlo’s well-off brother (Mark Duplass) and his aspirational wife (Elaine Tran) have this great idea for a baby gift — a night nanny, “a bougie thing only rich a——s do.” People like them, in other words. The night nanny comes in and tends to the baby overnight, letting the parents get the sleep that keeps parenthood from shortening your life.

After a lot of resistance, Marlo agrees. And when the younger version of herself — tall, blonde Mackenzie Davis of “The Martian” — shows up, it’s as if Mary Poppins has stepped off the screen and come to make Marlo’s world right.

“I’m here to take care of you,” she says, always beaming. And damned if she doesn’t.

“Tully” cleans as she coos and clucks to the infant, sharing little pearls of wisdom in a steady torrent of grad-student trivia.

“I’m like Saudi Arabia. I have an energy surplus!”

The transformation in Marlo is immediate. She smiles, she gets a handle on things, the discouragement in her eyes fades. A little.

Because Tully is not just her helper and caregiver, she’s her doting confessor. Here’s someone you can tell, “If I had a dream that didn’t come true, I could at least be pissed at the world.”

This isn’t Cody’s most witty script, and the Oscar-winning Theron isn’t the most gifted at delivering these warmed-over one-liners.

“You’re like a book of ‘Fun Facts for Unpopular Fourth Graders.'”

Theron is better at the meltdowns and righteous tirades Marlo has when confronted with a world that isn’t as accommodating and sympathetic of the plights of motherhood as it should be.

And that stance, by the way, explains this picture’s mostly-adoring “Hug your mom” reviews. It’s got a righteous motherhood subtext that trumps, to some, its generally dull and predictable story arc. That, and Theron’s usual commitment to dressing down, ALL the way down, for a part.

Ignore one “Knocked Up” sequence, try not to notice how much of what we see is handled in cute montages, smile at the sensitive pop tunes (a cover of the Bond theme “You Only Live Twice” is key), try to recall one exchange as funny as this one between the affluent brother and his sister.

An hour in, the picture stops in its tracks and gives away The Big Reveal, where it’s taking us, in a jarringly abrupt moment only ex-stripper Cody or some NON-mom in the Hollywood Bubble (Reitman?) could find “normal” and believable.

That’s when I checked out of “Tully.” You don’t grade a motherhood dramedy on the curve just because Mother’s Day is coming. Even if it’s “Nanny McPhee” with F-bombs.

MPAA Rating: R for language and some sexuality/nudity

3 Responses to Movie Review: Theron, Davis team up on the horrors of motherhood with “Tully”