Posted on March 5, 2020 by rogerinorlando

Boy, you settle in for an easy-going feel-good sports drama, and “The Grizzlies” is what you get instead.

It’s got lump-in-the-throat, feel-good moments, sure. But the stakes could not be higher in this Canadian production. It begins with a suicide, and that won’t be the last we see or hear about. The alcoholism, violence, poverty and lack of hope that anything will ever get better make this village above the Arctic Circle infamous for its suicide rate.

And “Grizzlies” doesn’t even show ‎Nunavut Territory at its bleakest — in the winter, when there’s little daylight and temps are at their lowest.

Here is a true story from the early 2000s about a frozen pit of despair made a little less hellish and desperate by bringing the Inuit kids in the town of Kuklutuk a sport.

Ben Schnetzer (“The Book Thief”) stars as Russ Shepherd, a history teacher fresh out of McGill U. “Northern Exposured” to the far north for a teaching job that will forgive his student loan.

Russ is the classic “fish out of water,” an upbeat Canadian full of questions “aboot” this place he’s only read about in history and geography classes and seen in documentaries.

“You lived up here a long time?” he quizzes one native.

Will Sasso is the math teacher who picks him up and shows Russ around Kuluktuk — and gives him his first dose of what life there is like. Food prices are insanely high. Nobody locks their doors and you don’t have to knock to come in. Everybody has guns.

Oh, and Mike drinks, like everybody else. He even drinks and drives. Other folks? The alcohol fuels domestic violence, and it doesn’t help that staggering suicide rate. This has filtered down from the adults to the kids at the high school, who drink and joke and smoke and flirt every evening after school, which many don’t bother to attend.

Russ gets an earful of “‘Mister’ is a white man’s word” and cracks about being a “Southerner” that first day in class. Questions from the kids are downright impertinent.

“Hey Russ, how bad you mess up” to wind up in Kuluktuk?

He even gets punched in the mouth. It’s pretty obvious this booze, violence, depression and hopelessness is hard-wired into the place.

“What’s being done” about this “epidemic?”

“Nothing. Or nothing that works.”

He can’t reach the kids with the “get an education so you can get the hell out of here” pitch. “School” meant traumatic relocations (government boarding schools) for their parents, and the kids have absorbed a lifetime of mistrust and disdain for “the white man’s school.” The boys would rather hunt, anyway.

Abandoning hope is just their modern wrinkle on “the old ways.”

Russ figures the sport that got him through college would be just the thing. If only he can talk the no-nonsense principal (Tantoo Cardinal) into getting past his “arrogant and pushy” first impression and let him start a lacrosse team.

That takes a LOT of doing. 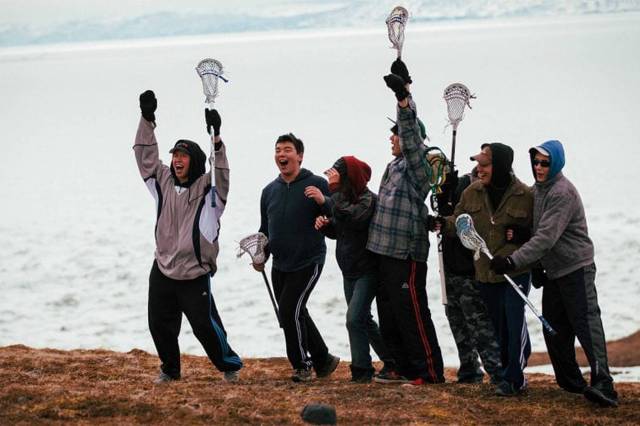 There’s a bit of “Northern Exposure” in this Moira Walley-Beckett, Graham Yost script. The “fish out of water” needs an inscrutable female tour guide. That would be Miranda (Emerald MacDonald), “the smartest, most responsible kid in school.” She explains customs, folkways and values to Russ.

But the film’s light, comic touch ends every time Russ is exposed to this kid’s dissolute home life, that one’s abusive father. They’re feeding their hungry families, caring for neglected younger siblings. Some are bullied at home.

And the “popular” boys, the would-be jocks? They’re listening to their parents when it comes to listening to “the white man.”

As the principal warns, “Broken promises are dangerous up here.”

“Grizzlies” can be heavy-handed in its messaging, trite in the assorted over-familiar obstacles hurled in the hero’s way as he seeks to teach these kids the sport their southern (native) forebears invented, that getting clean enough to play is vital because, “You cannot win with that crap in your system.”

But more than once, and at the most unexpected moments, something in Miranda de Pencier’s film will hit you right in the heart. A training regimen that includes racing “the best athlete here,” the guilt Russ takes on for not hearing a one teenager’s cry for help and advice, shocking deaths.

This isn’t the most flattering portrayal of Inuit life, from the cycles of drug and alcohol and physical abuse, to the almost Russian schadenfreude of the place — rejecting “white man’s” education and any efforts to better yourself. That’s a welcome break from the formulaic character arcs and plot in “The Grizzlies.”

And the mostly non-professional cast of kids — Booboo Stewart, MacDonald, Anna Lambe, Paul Nutarariaq and Ricky Marty-Pahtaykan among them — and Schnetzer’s affable way of getting across naive tactlessness give “The Grizzlies” a lift.

This is a “feel good” movie that lets you feel good only after it shows you how bad everything can get.

MPAA Rating: R for language, and some drug/alcohol use involving teens