Movie Review: Costa-Gavras reminds us of the dangers of “Capital” 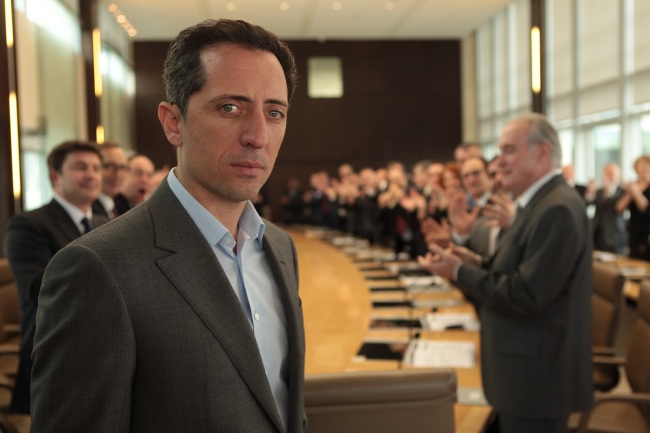 Costa-Gavras, that legendary lefty of the international cinema, is on message and but somewhat off his game with the French drama “Capital,” a mildly entertaining sermon about American “Cowboy Capitalism” as it rubs up against “The French Way.”
It’s a modestly engrossing tale of the shenanigans, boardroom intrigues and high stakes gambling at a big French investment bank. But when you’re preaching about workers suffering from the mistakes and misdeeds of the super rich, the sales pitch is muddled if it’s made by a fellow who sees himself as the “Robin Hood of the Rich,” stealing from the poor to pad the pockets of the one percent.
That’s how Marc Tourneuil (Gad Elmaleh of “Midnight in Paris” and “Priceless”) cynically describes himself. He’s a bit young to be in the upper echelons of Phenix Bank, but he took shortcuts — Goldman Sachs, to Phenix to ghost-writer of the company president’s autobiography. When that president is felled by illness in the opening scene, Marc’s life is upended. He’s anointed by that sickly president (Daniel Mesguich) as the new CEO of Phenix. The president figures he’ll be his “boy.” Schemers on the board such as the conniving De Suze (Bernard Le Coq) consider him a place-filler to keep the stock price up until the “real” transition takes place.
“He’s a good boy. He’ll do what I say.”
And then there’s Dittmar, the Irishman (Gabriel Byrne) heading up the bloc of high rolling, American corporate raiders. Dittmar cajoles (“We’re your only friends, Marc.”) and threatens Marc to get him to do what his group wants.
“Time for you to start firing people.”
Slashing staff will boost the stock price. But Marc, married to a liberal (Natacha Régnier) and descended from old school leftists, is loathe to do it. He buys some time by hiring a private detective to dig up dirt on the opposition and listens to his wife, who suggests using strategies time-tested by Chairman Mao. Win over the workers. So he starts thinning the workforce by getting employees to give blunt assessments of their bosses.
“A hated leader is a bad leader.”
Meanwhile, he’s angling for better pay, scheming to find ways to make his promotion permanent and falling into the supermodel trap (Liya Kebede) that has been the undoing of many a titan of business.
Costa-Gavras and his co-writer cannot seem to make their minds up about their hero. Is he the paragon of “The French Way,” protecting employees, “ethical” in his investments? Or is he a self-serving opportunist, cavalier about his underlings, playing hardball with the big boys, squirreling away cash, hungry for the sexual perquisites of power?
The director of “Missing,” “Betrayed”, “The Music Box”, “State of Siege” and “Z” has his finger on the pulse of outrage, as usual. But he seems lost trying to make up his mind about Marc and resorts to smug to-the-camera narration, quietly confrontational dinners with his workers-unite relatives and an ugly sexual moment to show how power corrupts the fellow. On occasional Marc fantasizes what he’d REALLY like to do or say to those whose views are anathema to him.
Byrne makes a perfectly acceptable villain, but Costa-Gavras keeps him at arm’s length, making him hurl most of his threats through Skype video calls.
Costa-Gavras fails to turn this situation and these promising characters into the indictment of capitalism he set out to make, or into an entertaining , Oliver Stone-style financial double-cross thriller which is what “Capital” (in English and French, with English subtitles) falsely promises to deliver.