Posted on February 5, 2013 by rogerinorlando 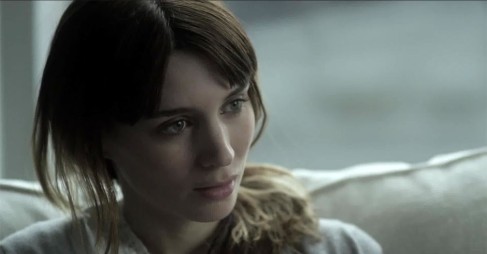 It’s been a dizzying couple of years for Rooney Mara, the young actress who gained a little attention in “The Social Network” and then worldwide fame for starring in Hollywood’s version of “The Girl With the Dragon Tattoo.”

The offers have rained down in a torrent, a veritable embarrassment of riches. She was set to do “Zero Dark Thirty,” but that would conflict with films directed by Terrence Malick and Steven Soderbergh. So no “Dark Thirty,” and Jessica Chastain lands the Oscar nomination. But being a 27 year-old kid in the candy store, Mara isn’t fretting.

“It’s a good problem to have, I guess,” she says. There’s an untitled Malick film in the can, co-starring with Christian Bale and Ryan Gosling. There’s another directed by Spike Jonze on the way, a 1950s period piece by Nick “High Fidelity” Hornby.

“I feel like I’ve eaten TOO much candy over the past year,” Mara laughs. “It’s got me dizzy. But I know how blessed I am to have had these opportunities presented to me, and I’ve been really anxious to make the most of the moment.”

It’s all come so suddenly for Rooney, younger sister of Kate, member of the family that owns the New York Giants football team. You’d be tempted to hate her, or at least resent this strikingly beautiful child of wealth who is burning through a lifetime of “big breaks” in just a year or two. But she’s so good it’s hard to turn hater.

She pulled down enthusiastic reviews for her shaved-head turn as Lisabeth Salenader in “Tattoo.” And her notices for “Side Effects,” her new film for Steven Soderbergh (opening Feb. 8) have a touch of “She has arrived” about them. In the film, she plays a young woman whose pill-treated depression threatens to blow up on her life and that of the doctor (Jude Law) who prescribed the medication for her.

Mara came at Emily in the usual ways – taking advantage of “ten years of research” that screenwriter Scott Z. Burns (“The Informant!” “Contagion”) did in building the character, meeting mental health professionals and depression sufferers.

“And now, on Youtube, there are all these video diaries. People with depression make video diaries, and you see how they look, how they sound, how they say they feel all the time. Interesting. You watch those and you see confirmation of the reading you’ve done, and it helped me get a feel for the overall mood of someone who is carrying that around with them all day. You can read about it all you want, but seeing it on a lot of different faces confirmed how I wanted to play her.”

As convincingly as Mara internalizes every role she plays, Emily was “not someone I could take home with me.” Soderbergh’s sets are notoriously tranquil places where the actors keep civilized hours, “unlike other roles in others movies, where you work twelve hours or more a day, so you can’t help but let her take you over. If she’s going through something awful, you live with that. This wasn’t like that.”

That said, she is ready to take a break after grabbing as much candy as she could for two years. There still are no firm plans to do Hollywood versions of the other “Dragon Tattoo” movies, so there’s no pressing engagement on her schedule, for one. She’s looking at her director, Soderbergh, who has announced his retirement from making movies after finishing a Liberace TV movie.

“I could see taking a break,” Mara says. “Now, I have to. Except I’ve forgotten what you do when you’re not working. It’s like learning to walk all over again.”

(Review of “Side Effects” is here.)

1 Response to Rooney Mara on fame, portraying depression and de-compressing