Documentary Review: Citizens organize to “Slay the Dragon” of the Gerrymandering Conspiracy 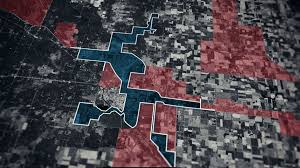 “Slay the Dragon” is  documentary about what happens when you let “legislators pick their voters,” and not voters choosing their elected representatives, the way the Founding Fathers intended.

It’s about Gerrymandering, and co-directors Chris Durrance and Barak Goodman open their film about a crisis created when extremists, backed by callous wealth, no longer feared being removed from office for their misdeeds.

Flint, Michigan’s water contamination crisis of 2014-onward, is laid at the feet of the “Tea Party Revolution” of 2010, when big money and Republican strategists calculated a way to capitalize on drummed-up outrage over the bailouts of the financial crisis of 2008, and Obamacare, to create “permanent” majorities in legislatures, even when they were outvoted at the polls.

Flint’s voters had control of their city taken from them, and the next thing you know, the GOP appointed “dictator” had folks there drinking lead contaminated water, being sickened and killed by callous Republican “budget cutters” nobody voted for.

Michigan, Wisconsin and to a lesser degree, North Carolina become the focus of the film, which is about the years-long grass roots efforts to take Census-mandated legislative redistricting out of the hands of partisan legislators and put it in the hands of “Citizen’s Commissions.”

In Wisconsin, a state which is almost evenly split between Republicans and Democrats, an extremist legislature and hard-right Koch-backed governor not only Gerrymandered protections into their majorities, but used their untouchability to carry out the test case assaults on voting rights that spread through GOP Gerrymandered states across the country.

“Project Redmap” it was called, and the film details how this coordinated nationwide effort set out, using big data “consultants” scheming behind closed doors to cherry pick into existence impregnable GOP districts, to “quarantine Democratic trash” into a handful of districts, and use the unimpeachable power this gave them to suppress voting rights to guarantee minority rule in every state where this happened.

“The biggest heist in modern political history,” one historian calls it.

While the filmmakers interviewed journalists, academics, some displaced legislators and even a few Republicans dismayed at this corruption of democracy, it focuses mostly on efforts to get a “Voters, not Legislators” redistricting initiative on the ballot in Michigan, an under-financed grassroots effort started by Katie Fahey.

Examples of how extreme American politics became —  in an instant — are illustrated by the redrawing of the district lines of popular moderate N.C. Democrat Heath Shuler, in the mountains of North Carolina. His biggest cadre of voters, the liberal tourist and arts city of Asheville, was erased from his electorate. Corrupt, far right GOP bomb-thrower Mark Meadowswas elected in his place.

While there’s ample evidence of the under-handed and heavy-handed way all of this was accomplished — hiding the process, railroading through sweeping assaults on unions, voting rights, unpopular broadening of “gun owner’s rights” and the like — a lot has come out since the film was finished.

One of the key figures mentioned, the death of “Gerrymandering King,” GOP consultant Tom Hofeller, laid bare the nastiest part of this “nuclear” use of big data to deny the public’s right to punish extremist, corrupt and incompetent elected officials.

Think Senator Richard Burr will pay for his insider trading? Even if he resigns, the N.C. legislature rewrote laws so that no matter who is governor (a Democrat, now), a GOP task force would select his replacement.

“Slay the Dragon” takes its title from the first widely-known instance of Gerrymandering, the 1812 district contorting efforts of Elbridge Gerry of Massachusetts, who created a district that looked like a salamander or “dragon.”

“Slay the Dragon” became the rallying cry of the Michigan and now national grassroots campaign to end this partisan practice. But as hopeful as the movie wants to be, it can’t help but make obvious how many steps “the people” are behind those Project RedMap masterminds.

The Supreme Court won’t make sweeping changes to the process, as Mitch McConnell, Trump and former Justice Anthony Kennedy conspired to “rig” it for the next 20 years. McConnell’s efforts to pack the lower courts aren’t even touched on here.

It will take dogged, exhausting state-by-state campaigns to wrest control of state and national legislatures from the Koch Brothers/WalMart/Chamber of Commerce/Wall Street crowd that owns them.

Be optimistic at your own peril.