Netflixable? Even Canada has its gun nut survivalists, prepping for “The Decline”

The trouble with buying into “dog eat dog” social Darwinism, the sort of mindset it takes to become a survivalist, is making that leap to accepting and becoming a “dog” yourself.

That’s subtext of many of “Man Hunts Man” thriller, from the good (“The Most Dangerous Game”) to the the humorous (Robin Williams and Walter Matthau ARE “The Surivors”), and even the hilariously bad (“The Hunt”).

And that’s the point pounded home in the French Canadian thriller “The Decline,” a lean, slow-starting survivalist tale that turns pulse-pounding for its final act.

The plot is similar to that 1983 Williams-Matthau comedy, a bunch of hand-picked survivalists are invited to a training compound in snowy northern Quebec by their Youtube Guru, Alain, played with dead-eyed verve by an actor ironically-named Réal Bossé. Because, being a no-nonsense survival expert and something of a cult leader, he pretty much is…REAL bossy.

Stop laughing. This is serious.

We’ve met one of the invited “prepared, enlightened citizens” — Antoine (Guillaume Laurin) — in the opening scene, running a “bug out” drill with his wife and little girl in the middle of the night.

Now he’s among eight fellow wannabe soldiers on Alain’s 500 acres of snow, trees, greenhouses, solar panels and booby traps for an intense immersion in rabbit hunting and gutting, living off the grid and commando training.

He’s created a “Temporary Autonomy Zone,” and make no mistake — Alain is no fool. He can make his own maple syrup, hunt, raise chickens and self-sustain on those 500 acres, which keep “the world at bay,” he says (in French with English subtitles).

They’re all white, mostly men — with an Army wife and another woman — and they stay in a heated barracks-tent, eat together, share their thoughts on “gun control,” a coming “economic crash,” the potential for a “pandemic” and Alain’s favorite boogeyman.

Imagine holding off “5000 migrants with 5000 machetes,” he enthuses. But don’t be quick to say you’ll kill a lone interloper. Suppose he’s a doctor, an extra pair of hands for needed labor?

That Alain, always planning ahead.

Of course, it all comes apart when the truly unexpected happens. A bunch of motivated amateurs, practicing bomb-making with black powder? What could go wrong? 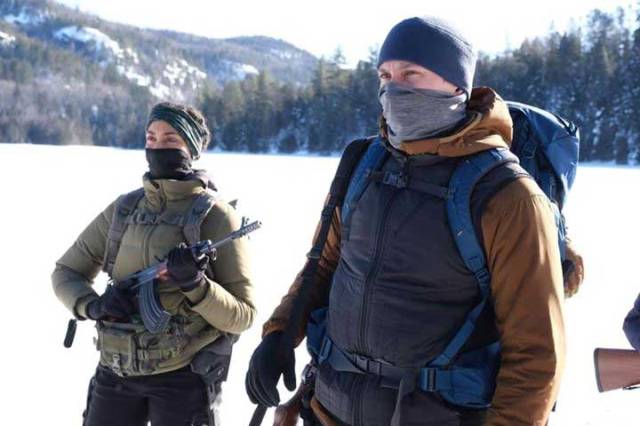 For such a short film, this one takes a while to get to the meat of the matter. The only real novelty to THIS version of “survivalists forced to kill to survive” story is the French Canadian setting and accents. Even a compassionate democracy with socialized medicine has its gun-nut outliers.

The violence of the long third act comes in a rush — a series of jolts. And it is visceral and as personal as it gets.

Maybe this isn’t the best movie to watch to “escape” the current shaky state of Western Civilization. None of the characters are much more than sketched in “types.”

But it’s an entertaining variation on a worn-out “self-reliance” theme, even if it won’t discourage a single Netflix user to put off that next trip to the AK-47 dealer down the street.

1 Response to Netflixable? Even Canada has its gun nut survivalists, prepping for “The Decline”