I hadn’t seen the absurdly entertaining British WWII film “The 49th Parallel” in ages, probably not since AMC was “American Movie Classics” and showed, you know, movies.

And the first thing that strikes you watching this self-described “propaganda film” today is what HD and a nice restoration job brings back to the glorious black and white cinematography of Freddy Young.

Stunning Canadian locations, from Hudson’s Bay to Niagara Falls, with Banff and the wheat-covered plains of Manitoba, such immaculate compositions that you don’t mind the rear projection/soundstage/water tank fakery that inserted stars such as Leslie Howard and Laurence Olivier into this world.

The second element to stand out is the uproarious fun Laurence Olivier — not quite a film “star” when this film came out in 1941 — has playing a French Canadian trapper. You have to search all the way to his late career vamps like “Sleuth” and “A Little Romance” to find the giddy glee he brings to Trapper Johnny who– only minutes before Nazi submariners storm into the Hudson’s Bay Company trading post where he is having his first shave and bath in a year– learns World War II had started in 1939.

He sings “Alouette,” he lays it on thick as he promises, “We gave you preety good leeking en ze last war. We do it again, eh?”

The best performance in the film is still by Raymond Massey, the most natural and I’d argue most “modern” screen actor in the lot — at home playing a soldier AWOL from the Canadian Army, jocular and friendly to his fellow boxcar tramp until he’s clubbed and figures out the guy’s a Nazi fleeing to the “neutral” United States.

But Olivier provides a fun front bookend to that Massey exclamation point in the coda.

Michael Powell, working with his favorite screenwriter Emeric Pressburger, was years from his Technicolor glories of “The Red Shoes” and “Black Narcissus.” David Lean was the increasingly accomplished editor who kept the action zipping along for this two hour — with the occasional pause for a political sermon — action picture. He’d transition to directing with “In Which We Serve,” and surpass Powell in the directing pantheon with “Laurence of Arabia” and “Doctor Zhivago.”

The idea was that they’d make a patriotic movie about a German U-Boat, sunk off the Canadian coast, with half a dozen ideological Nazi survivors evading capture but picked off one-by-one as they experience Canada’s diverse democracy, decency and intrepid spirit in the face of global fascism.

The Nazis want to find safe haven in the still-neutral U.S., and the filmmakers wanted to show America that its values demand that it join the fight against fascism.

Even the film’s edits, when Columbia Pictures distributed it in the U.S., seem timely. Nazi speeches about “Eskimos” and “Indians” and “Negroes” being “apes” and “inferior animals” had to be cut — because the distributors didn’t want Americans, especially in the Jim Crow South, to be offended by seeing their Nazi racial attitudes on the screen. 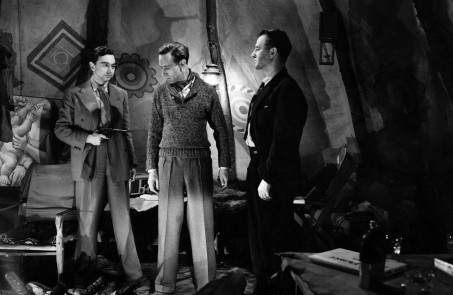 The sermons about tolerance, democracy, kindness and freedom — delivered by Olivier, Anton Walbrook (“The Red Shoes”), Leslie Howard (“Gone with the Wind”) and Massey (“Abe Lincoln in Illinois,” “East of Eden”) may play as pauses in a film that almost sprints from coast to coast. But they resonate still.

And the depiction of Nazis — fascists, Germany’s Proud Boys — might have seemed cartoonish twenty years ago. But they come off in 2020 much closer to the way they were originally received.

They are cultists, dogmatic, bigoted bullies. They need their guns, and practically cower when they don’t have one. Germany, we are reminded, overran weak, harmless Poland just before the film was shot. The submariners gun down unarmed Eskimos, club or shoot others and kill one of their own for not adhering to dogma.

One (Raymond Lovell) is a Proud Boys plump self-proclaimed know-it-all with “not my fault” and “don’t blame me” — “I take no responsibility” — on his cowardly lips at many a moment.

Eric Portman is perfectly vile as their leader, an officer who feels the need to proselytize when given the chance, always shocked when others — including immigrant German Hutterites (led by Walbrook) — don’t fall for the childish, bullying racist Make Germany Great Again rhetoric.

That’s the thing about classic films. They keep talking to you long after the language of the day — cinematic, dramatic and rhetorical — has changed and the world has moved on. Here’s a classic that reminds us that we used to know Nazis aren’t “very fine people.”