Netflixable? Its easier to get into Italian soccer-hooligan “Ultras” than it is to get out 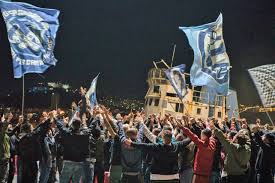 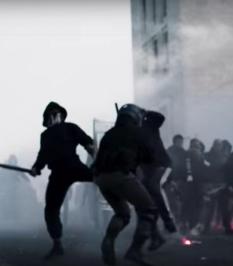 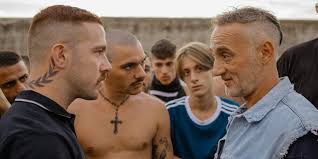 “Ultras” is a bloody-minded Italian melodrama that asks the eternal question, “Can this soccer hooligan be saved?”

For North American viewers, it answers a more important outsider-looking-in query. “What’s all this got to do with futbol (calcio, in Italian), anyway?”

“Ultras” are ultra-fanatical soccer fans, the ones who live, breathe and bleed for their local team, in this case, Naples, in the poor redneck south of Italy.

The Apaches long ago took their fandom to a new level. They’d rather spill the blood of fans of opposing teams, invade a stadium and start a riot, than weep at the cry of “Gooooolll!”

Francesco Lettieri’s film has as its bookends the biggest church events in any Italian’s life — a wedding, and a funeral. Both are rendered in Viking ritual by the presence of the Apaches, there to support this comrade as he weds, that one as he is buried.

Sandro (Aniello Arena of the Neopolitan thriller “Dogman”) still sports the tattoos and the cut-off jeans jacket (with a Confederate flag patch on the back), still gets around by motorbike, and still rumbles with the lads. He has a protege, young Angelo (Ciro Nacca), a thin, pretty teen who doesn’t look nearly tough enough for this life.

Sandro is high up in the hierarchy of the Apaches, there when they paint their DIY blue and white team banners, leading the songs where they bellow about their hearts being blue and white, these “sons of Vesuvius” who add, menacingly, that “maybe one day it’ll explode.”

They explode at the slightest provocation.

“Did you hear about Florence?” founder and ostensible leader Bara (Salvatore Pelliccia) bellows (in Italian with English subtitles). “We need to go kick the s— out of them!”

What’s telling in that question is the assumption that an ultra-Naples fan wouldn’t know the score and probably wouldn’t care. It’s the fight that the Apaches probably started, in an away game at the Florence stadium, that’s their only concern.

This isn’t about futbol in the least. The Apaches, with their Spartan “AAa-OOOOO” chant from “300,” their arm salutes, ink-covered skin and dead-end lives, are a fascist sports cult. And a changing of the guard is underway, with 30ish organizer Pechengo (Simone Borrelli) and hotheaded thug Gabbi (Daniele Vicorito) ready to take things to another level.

But as “the kids” are indoctrinated, smoke bombs sourced and smuggled into stadiums and brawls provoked, Sandro starts to wonder what we do.

Isn’t he getting “Too old for this s–t?”

Can he escape from this family, explain away “my past is a bit…unusual” to the pretty, rough and ready bar pick-up Terry (Antonia Truppo)? Is there life beyond soccer rioting?

Angelo has a mother furious that she’s about to lose another son (Angelo) to Sandro and this horrific lifestyle. There’s a hint of the working life outside of the Apaches, even though his every outing — pool hall to swimming picnics off the breakwater — involves his fellow neo-skinheads.

Our Neopolitan director knows this territory and immerses us in it, showing us far more than he has any character explain. It’s a beautiful but depressed and somewhat ruined place, the Dead End of Italy, where all the Italian films and TV shows that want to show crime emerging from a place with no opportunities set their stories.

And Lettieri takes us inside the riots, which seem planned but have little strategy other than smuggling a chain under that team scarf, and wearing a wide belt with a sharp buckle — for weapons.

Italian riot cops are overrun and pummeled because these rioters have more experience at these brawls than the guys with the shields. How there aren’t staggering body counts all through the endless soccer season is a miracle. Perhaps discouraging police shootings is the reason for that.

The film’s story, a hoary melodramatic parable long before “The Godfather” complained “Just when I thought I was out, they pull me back in,” is a simplistic necessity. Lettieri wants us to feel the pull of the “group,” the simple physics that drive these conflicts. No time for thinking, here.

Thus, we catch the occasional lapse in narrative logic.

When you’re telling a story about futbol that has nothing much to do with futbol, that’s just the way things play out.

Credits: Written and directed by Francesco Lettieri. A Netflix release.