Movie Review: Girls bond over the boy they shared like a “Banana Split” 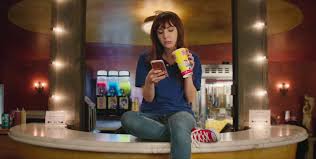 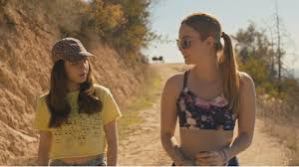 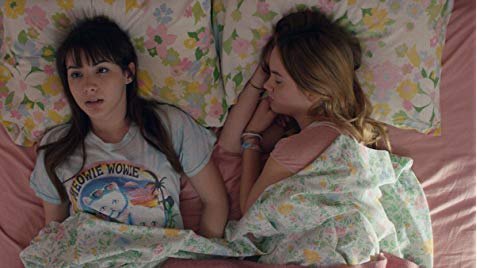 “April Love” roars out of the gate in “Banana Split,” a romance that begins, progresses sexually and socially through two years of high school and comes to a crashing halt — all of that encapsulated in the opening credits.

Because it’s what comes AFTER April (Hannah Marks) breaks up with surfer pinup boy Nick (Dylan Sprouse) that’s a lot more interesting. Life is what comes after graduation.

She’s prepping for a cross-country trip to Boston University — college. The film gives us countdowns, “84 Days Until Orientation,” to remind us of that.

And as quickly as Nick moved on, blond bro’s HEAD would spin if he saw how quickly April and his new girl, Clara (Liana Liberato) click. They collide at a house party, bond over “shots” and Junglepussy “Bling Bling” sing-alongs, and “Nick” stories.

“Did he always put his NOSE in your mouth?”

Just like that, numbers are exchanged and “rules” are established for their friendship.

“Rule number one, no talking about ‘Nick.’ Rule number two, no TELLING Nick!”

The title may be a tease, sexual slang for a lesbian relationship. But Clara and April click on a whole different level, a bond that may outlast this boy and could outlive every boy to come.

The corporate ethos of the production company American High” lays this vow on you right on their website. They want to “update” the sophisticated teen comedies of John Hughes (“Breakfast Club,” “Sixteen Candles”) and “embrace the R-rated reality of high school” today with their films.

“Split” is also more charismatically-acted, wittier and funnier, closer to the Hughes films in laughs and the limited role parents play in this world. The only adult we meet is April’s “cool” Mom (Jessica Hecht) who ineptly referees fights between the graduating sister and her obnoxious, foul-mouthed 14 year-old sibling, Agnes (Addison Riecke).

“I am a three dimensional HUMAN BEING,” Mom complains, “who has had sex…and UTIs!” So, listen to your Momma. Right.

Marks co-wrote the script and packs Hannah with both deflated vulnerability about Nick moving on, and epic threats to their mutual friend Ben (Luke Spencer Roberts) so that she can get details about who her ex has taken up with.

“I am going to tell WEIRD stories about you at your funeral so that NO ONE accurately remembers you!”

We get how rare meeting someone compatible can be when you’re too-smart and 18.

Cinematographer (“Safety Not Guaranteed”) turned director Benjamin Kasulke and the American High production team aren’t reinventing the genre so much as giving tried and true themes a fresh, frank edge.

There’s nothing deep in this “Banana Split,” nothing remotely moving or profound. But Marks (TV’s “Dirk Gently’s Holistic Detective Agency”) and Liberato (“If I Stay”) let us believe these two would connect, push each other’s buttons and bruise each other, and in just that way — just not in the way the title implies.

MPAA Rating: R for crude sexual content and language throughout, drug and alcohol use — all involving teens.