Movie Review: Eisenberg takes on an iconic role in “Resistance” 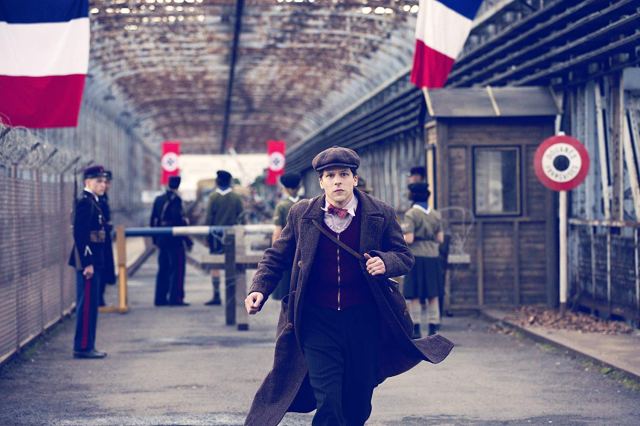 The eternally boyish Jesse Eisenberg can almost get away with playing a 16 year-old Jewish Boy Scout helping to rescue orphans during World War II in “Resistance.” Sure, 35 is a tad long in the tooth (he’s 37 now) to pull off “idealistic teen.” But kids had to grow up fast during the war.

It’s the fact that he’s got to convince us that he’s the iconic French mime Marcel Marceau that proves to be the real overreach. Mastering “the silent art” this long past your “mime class” years (don’t think he ever had them), even when your mother performed as a clown, proves to be the big letdown in “Resistance,” a harrowing tale of Occupied France that has enough “true story” in it to make your jaw drop, enough suspense and derring do to do justice to its subject.

Marceau became famous the world over in the decades after the war, the most celebrated mime in history. But in France, he was a decorated war hero, one of that rare breed of heroes who desperately fought back — mostly by (according to the film) helping his fellow Jews survive.

The tale is framed — told by General George S. Patton (Ed Harris) — speaking to a huge Army gathered in Nuremberg just after the German surrender. “Courage,” he reminds his men, “is no more than ‘Fear holding on a minute longer.'” And this young man, whom he introduces, exemplifies that.

A child (Bella Ramsey) is orphaned when her parents (Edgar Ramirez plays her father), are grabbed and murdered by Nazis on Kristallnacht (1938). She is among a group of orphans bribed out of Germany to safety in the border city of Strasbourg, France, where young Marcel Mangel (Eisenberg) is learning to write, paint and perform despite the disapproval of his butcher-father and soldier-brother, who grouses “Marcel only thinks of himself.”

That view starts to change when the kid is enlisted by an activist Boy Scout friend, Georges (Géza Röhrig) to entertain the 123 orphans just freed by the Germans, to be cared for by Catholics in the town castle. Marcel takes to this work. And when the Germans overrun France in 1940, another of his artistic skills comes in handy.

Painters make the best document forgers. That’s when he changes his Jewish last name on his ID — inventing “Marceau.”

“I’m not a fighter,” he complains at efforts to recruit him for The Resistance. “I think, therefor I am.”

But the situation, and the entreaties of the pretty Emma (Clémence Poésy) draw him in. And that puts him in the line of fire of “The Butcher of Lyon,” Klaus Barbie, one of the most infamous German war criminals of World War II.

I’ve never read that Marceau confronted this “monster” directly. But writer-director Jonathan Jakubowicz gives his film an epic villain by pitting them against one another. Matthias Schweighöfer makes Barbie a cultured, ideologically pure sociopath — beating homosexuals to death to break up a gay underground gathering of queer Nazis, torturing and gunning down suspects in the empty pool of the belle epoch Hotel Terminus in Lyon, Gestapo headquarters for the region.

The subtext of “Resistance,” in light of the politics of Western Civilization today, is how people of the distant past whom we regard at “not human” in their treatment of others can seem awfully familiar in a climate of hate speech, rhetoric used to justify mistreatment of immigrants of other races.

And it’s a reminder that creative people — artists — play a role in resisting evil, preserving life, humanity and civilization itself.

“Resistance” is, in many ways, an old fashioned World War II movie. Most of those who fought as soldiers or resistors were very young, but Old Hollywood was forever casting Bogart, Savalas, Richard Burton, Gregory Peck and David Niven as its heroes — 40-50somethings.

Nobody in this is “Boy Scout” (it’s a coed organization in the film) age, and losing the impulse, fears and preoccupations of youth costs the film some of its pathos.

The action — daring rescues using street entertainment, fleeing Barbie through the Alps — is beautifully shot and edited. And this is an epic tale well worth telling (pity the French didn’t take a shot at it).

But when we’re meant to be moved, there’s a disconnect. And when we should be transfixed, something Marceau managed in mastering his art, we’re let down. Every time.

Credits: Written and directed by Jonathan Jakubowicz. An IFC release.