If you’re an American adult, and sentient, you’ve got to figure there are two attitudes to take towards Hulu’s exhaustive, four hour+ Hillary Rodham Clinton documentary, “Hillary.”

It’s either too soon, or too late.

Documentarian Nanette Burnstein’s interviews with Clinton and the list of others she selected to speak about Clinton paint a fairly one-sided and generally flattering portrait of the former Secretary of State, Senator and First Lady. She does a great job of humanizing a public figure who has been demonized since the early years of her husband’s 1990s presidency.

That suggests “too late,” the “Why didn’t we see THIS Clinton when she was running for president?” trap. As if Clinton had any control of the press narrative and stigmas attached to her reputation by her feminism, her business practices and her often well-intentioned stumbles as a public figure.

Then there’s the painful and fresh memory of her 2016 campaign, the poisonous blame-deflecting/tax-returns-hiding smear that Bernie Sanders ran against her, and what came after. Who wants to relive that, aside from MAGA cultists, who would never watch a Hillary documentary not distributed by Dinesh D’Souza, Jerry Falwell or Rush?

“Hillary” feels “too soon” in that regard.

But it’s a film that has historical value, beyond the near-hagiography it flirts with. And someday, future documentary makers will be able to use the many interviews, from Clinton’s childhood friends, college classmates, campaign staff and others to present a more balanced and dispassionate take on her career, her accomplishments and her foibles.

She’s got a point, that “What IS this about?” — the label that she is “inauthentic,” is rubbish. Campaign manager Robby Mook’s take that her style, a “problem solver” who looks at issues that way, rather than echoing the vague promises of “change,” “hope,” “Make America Great Again” or “Free college for everybody,” isn’t a good way to appeal to voters, who don’t sweat specifics.

But to anybody who avoids “Hillary” with the thought “I don’t need to hear any more about her, 2016, etc.” right now, I would quote hubby Bill.

Rolling out this film in March means it was too late for clueless Bernie Sanders to see that unless he changed his message, the size and the tone of his irritatingly myopic “bass,” that he’d lose EXACTLY the same way he lost in 2016 in 2020. Which he did.

The unfortunate timing of its arrival, on the heels of the TrumpDemic, which further reveals just how little the capital press corps has learned about its intellectual and intestinal shortcomings, its biases, double-standards and inability to direct public fury at the corrupt and unqualified (2000 was the first hint), is doubly frustrating. 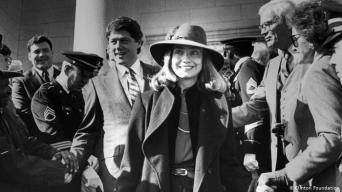 But for fans, at least, the first episode — “Golden Girl” — is uplifting. The second, which blends her First Lady years with her 2016 primary campaign against Sanders, isn’t soul-crushing.

The 2016 campaign/trials and personal life exhumations, hearing Donald Trump deflect his sexual indiscretions onto Bill Clinton’s cheating during that race might turn you away from the third installment.

Losing to the callow first-term Senator Barack Obama, and then ably serving under him only to become a lightning rod for the right wing smear machine is part of her history that we haven’t forgotten.

And the triumphalist tone of her Senate victory and Secretary of State “Most Admired Woman on Earth” years makes the finale seem like “alternate history.”

Add to the “too late” or “too soon” labels one other, “too long.” As thorough as this is, and in keeping with the “It’s a streaming service, WHY CUT IT DOWN?” ethos, it’s wearing to go through all this again.

Still, it’s a decent attempt at capturing the background that formed the backbone, a life of engagement, activism, “problem solving” and ambition and that makes “Hillary” worth your while. I don’t, however, recommend going at it in one fell swoop.

That binge is enough to make you think, “Too soon, too late, too much and to what point?”