You don’t have to be drunk to appreciate the no-budget charms of “Jurassic Thunder.”

Strike that. Being drunk is pretty much a prerequisite for watching this models and DIY effects student film, streaming now.

Anyway, “Jurassic T” — not to be confused with anything else titled “Jurassis” (characters make lame jokes about that) is based on “the Holy Grail of comic books,” or so we’re told in the almost-not-inept scene that frames the movie. That introduction is set in a comic book/cosplay gear shop, where the owner opens his “mint” copy of this comic book for a “gather round, nerds, and lemme tellya a story” opening.

This was the comic that “has it all — weaponized dinos, warlords, zombies, commandos, nukes.” Animated interstitials take us into this “world,” where African warlords are battled by a US/Russia coalition at the direction of a Donald Trump (Heath C. Heine) hologram.

He’s in “my sixteenth year in office” and he’s still insisting his people defer to the Russians.

Rather than “nuke” southern Africa, Trumpogram lets the Russians talk him into deploying “biologics” — T-Rex’s equipped with cameras and Gatling guns. But the “cosmic hair gel” serum that allows dinosaurs to romp among us is viral, and it makes zombies.

Whoopsie! Another Trumpodemic is on the loose! 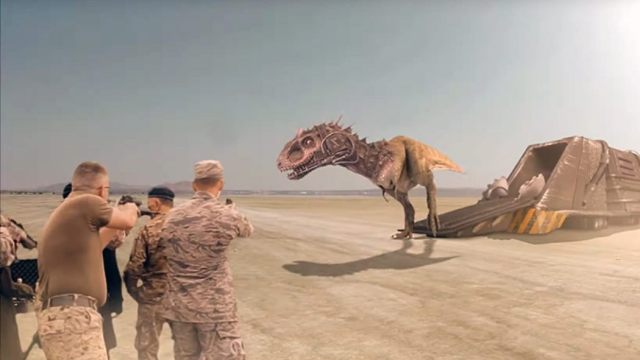 The effects are gloriously cheesy — model planes and T-Rex containment crates blend with stock footage of C-130 transport planes, superimposed parachute jumps and jungle “chases” that look like “Saturday Night Live” footage of soldiers fleeing on a treadmill while mismatched footage flashes behind them.

Firefights are many, with the gun muzzle flashes added later, and on the cheap. Blood spatters are similarly drawn in after the fact.

The characters include a Col. Sanders (Jon Cotton) — Trump: “How did a guy who sells fried chicken end up running the show?”

And the dialogue is of the “Smooth move, Ex-Lax” caliber — juvenile and dated and almost never close to funny.

It’s terrible on every level, pretty much from comic book store to Trump-and-cast dance video finale.

But if you’ve had a few, this could be fun. Make up your own drinking games for “Jurassic Thunder” because I’m above that. 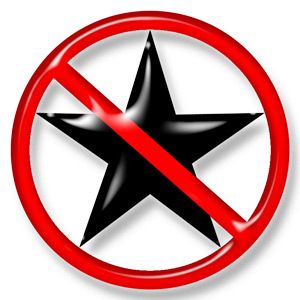 1 Response to Movie Review: Imbibe your way into “Jurassic Thunder”