The latest “Charlie’s Angels” reboot acknowledges its place in the Farrah Fawcett to Cameron Diaz to Kristen Stewart continuum. The “Townsend Agency” has had many Angels, many Bosleys.

It opens with a documentary montage of girls competing at sports, tackling big challenges and taking their rightful place at the table. So yes, it’s empowering, after a fashion — with plenty of nods to sexy fashion.

And the action scenes in the film demonstrate, again for the slow-learners, that actresses (and their stunt doubles) can handle fight choreography and action beats as well or better than any man.

Actress-turned-director (and co-star) Elizabeth Banks might be more at home in comedies, in front of (and in the case of the last “Pitch Perfect”) behind the camera. But she’s never less than competent at staging brawls, gun battles, The Big Heist and the Clever Con.

Kristen Stewart, Naomi Scott (“Aladdin”) and Ella Balinska, a British actress best known for the TV series “The Athena” but little known in this hemisphere, are put through their paces with skill.

But damn, this thing is pretty much joyless — no fun at all. Reports of Stewart’s gifts as a budding comedienne have been wildly-exaggerated, the one-liners don’t land and the story’s a non-starter and a bit of a downer, to boot.

The new Angels and their fight-teacher Bosley (Djimon Hounsou) spring into action when an engineer, Jane (Balinska) turns whistleblower on this dangerous new energy tech she’s helped develop that’s about to be released to the world.

Her sexist, credit-hog dunce of a boss (Nat Faxon) dismisses her concerns. If only she could get the word out.

But the moment the Angels make contact, the whistleblower is targeted. A pitiless assassin (Jonathan Tucker) is on her trail.

And the just-retired Bosley (Patrick Stewart) is onto something, too. Will new Bosley (Banks) help them make their getaway and save the day? 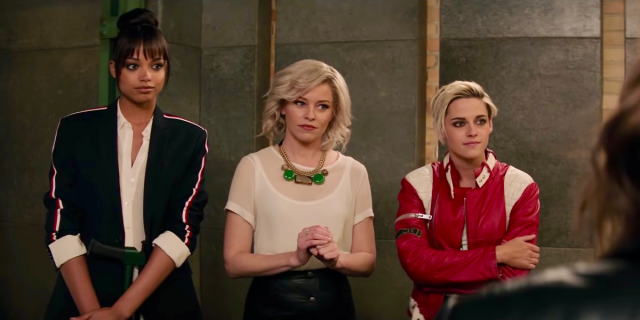 Whatever the benefits to the picture’s sex appeal, guys instinctively mistrust any female-lead action picture where too much attention has been paid to hair and makeup and heels and cleavage and short skirts and bare-midriff costumes. “Ocean’s 8,” anyone? Still, it tells us that everybody should be on the same page about this enterprise. It’s meant to be candy-colored escape, action-oriented fun.

But death is treated as glibly as in any vintage Schwarzenegger actioner, and even the funny lines get lost in the scuffle.

“You swiped RIGHT,” Stewart’s sexually ambiguous Sabina snaps at one quarry she’s about to drop. “I’M your girlfriend now!”

“I compressed his carotid and de-oxygenated his brain stem!”

Just flies off the tongue, doesn’t it?

The film changes locations — Rio to Hamburg, Berlin, Malibu and Istanbul — as often as our heroines change costumes.

The caper moments have a comic snap to them, the straight action bits a sense of unreality — except when people die. The villains, save for Tucker, are colorless.

Then again, it looks like one and all had fun taking on this action vamp. But you know, the Diaz, Lucy Liu and Drew Barrymore “Angels” movies were fraught with tantrums and tensions on the set. Legendary for it.

But the movies? Both of their “Angels” outings were more fun than this.

MPAA Rating: PG-13 for action/violence, language and some suggestive material