Movie Review: A woman takes up arms against the most powerful corporation ever in “The Warrior Queen of Jhansi”

Posted on November 15, 2019 by rogerinorlando

“The Warrior Queen of Jhansi” is a respectable B-movie from India about a heroine of “The Mutiny,” the 1857-58 Indian Rebellion against the rule of the British East India Company and its British soldiers.

Ambitious, if choppy, flatly-acted and less inspiring than was its intention, it is the story of Lakshmibai, the Rani of Jhansi, who resisted the all-powerful East India Company’s efforts to annex her princely state after the death of her husband,bstripping its independence and the succession of her stepson.

Devika Bhise has the title role, a genuine warrior queen who galloped into battle with her troops, fought with sabre and bow, and coined — the film says — the term “freedom fighter” in her quest to free her people from the British corporate and colonial yoke.

When widowed and threatened by the ruthless, racist Company Man (Nathaniel Parker), unappeased by the sympathetic British soldier (Ben Lamb) who acts as go-between, the young Rani lets her temper show.

“I would remind you I am no stranger to battle.”

Trained with sword, rifle and bow since childhood, she was ready to fight.

But the action is slow to come in this “Warrior” tale. There’s much intrigue, a whole lot of chewing out by Queen Victoria (Jodhi May) directed at Lord Palmerston (Derek Jacobi) of “the greatest company in history.” The Queen has Indian sympathies driven by an Indian Muslim attendant, as “The Warrior Queen” seems to be moving the timeline up for the “Victoria & Abdul” story — which happened decades later.

Years pass, and yet the dead maharaja’s adopted son, whom the Brits signed off on as heir to the throne (Jhansi was a British-allied state), doesn’t grow up. At all.

The picture slips into a confused murk during the interval between when The Company first decided not to recognize Rani’s family succession and the beginning of the rebellion. The Rani must find alliances before the British finally attack.

Because cholera holds them at bay for a while. Eventually, though, led by Sir Hugh Rose (Rupert Everett, unenthused), they march. The great siege begins, the cannon roar and The Rani charges into action, a sabre in each hand.

Bhise (“The Accidental Husband,” “The Man Who Knew Infinity”) is fine in the action scenes, less interesting in the assorted ladies-in-waiting/confer with advisors/negotiate with the British officer interludes.

Her fiery moments of “Do NOT presume to tell me what I can and cannot do,” her speeches to rally the troops with tales of “rivers of blood…flowing through our motherland” are nothing special.

Bhise’s mother, actress and producer turned director and co-writer Swati Bhise, doesn’t demand more from her, and the film she conjures up is often exposed as a malnourished polemic about British racism, sexism and Anglo-Christian supremacy as resisted by this Brahmin born royal.

Not that epic, in other words.

Most of the fighting in this two year rebellion, sparked by British decisions to force Muslim Indian East India Co. troops to use paper cartridges sealed with animal fat for their rifles, is kept off camera in this would-be epic.

There are continuity errors, and not just having the same little boy play the young prince in scenes set five years apart. 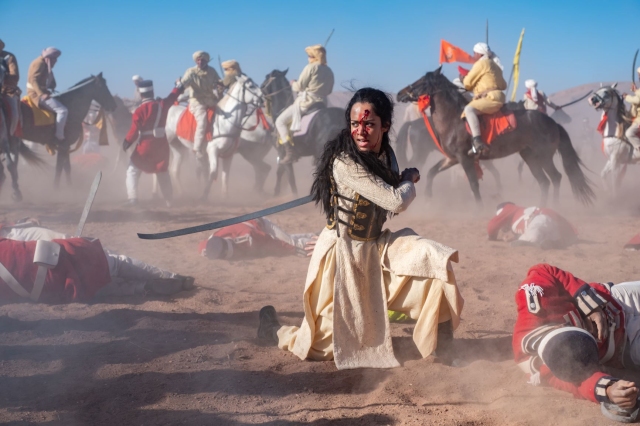 Parker is agreeably vile as the “racist Brit,” the one who fumes “We owe these vulgar natives nothing. They’re barbarians!” Jacobi’s East India chief tries to charm Victoria with the notion that they’re “civilizing” and “converting to Christianity” the vast, fractious subcontinent that this extra-governmental corporation is running.

May’s Victoria gets her back up nicely. If only Bhise exhibited this sort of confident fury as Rani.

“The Warrior Queen of Jhansi” is educational only if you take to the Internet afterwards to look up the details I just filled in, allowing you to realize the corrections that needed to be made to the film’s account.

The entire enterprise has a tentative feel, with the elder Bhise more confident directing dialogue vignettes and the combat than with handling the sweep of the story, which feels incoherent, as often as not.

And as unemotional as most of this depressingly uninspiring, blood-stained tale is, you have to wonder what’s missing, and how the filmmaker can presume to tie Rani’s heroic struggle with the eventual independence of India, which came almost 100 years later.

She had to be more charismatic than this to inspire over the ages.