Movie Review: “Antrum: The Deadliest Film Ever Made”

You can’t manufacture a “cult film.”

But you can play around with “Hey you guys, this REALLY happened!” Try a new twist on the “found footage” horror formula that “The Blair Witch Project” perfected, a “long lost movie” myth with a touch of “The Ring” about it.

Call it “The Deadliest Movie Ever Made,” and make it about a motion picture that screens as “the work of the Devil,” a movie never truly released because people who saw it died, a theater that showed it burned up and killed a bunch of people.

“Antrum” is its title, a 1979 American made “indie” film that a couple of film festival programmers screened for admission to their fests in the ’80s — and met untimely ends.

This is the “cursed movie” myth that dogs John Wayne’s debacle “The Conqueror” or more recently, where “Poltergeist” lost a lot of sweet and respected actors, and let Craig T. Nelson live.

Filmmakers David Amito and Michael Laicini wrap their conceit in a mockumentary, complete with “experts” on “Antrum” and “demonology” and horror movies. Their expert testimonials speak of it being “the Holy Grail” of cult films, one that it’s “not safe” to watch.

A favorite amateurish touch? They misspell “Budapest,” the city where the theater allegedly burned down in their “tribute” closing credits. Perfect.

The “only print” of the movie itself is an odd affair, a simple spin on “Pet Sematary” with Cyrillic and English credits, and a bizarre tale of a little boy (Rowan Smyth) who sees his beloved dog Maxine, “put down” by a vet.

Nathan knows “All dogs go to heaven.” But Mom says no, Maxine was “bad.” She’s a hound in hell, now.

Nathan is so distraught that his sister Oralee (Nicole Tompkins) locates a book of necromancy and leads him on a camping trip to the forest “where Satan fell when he was cast out of Heaven.”

They’ll follow the book’s directions, with chapters headed “Before You Get to Hell,” and “Welcome to Hell” (not pictured, the prologue, “So You want to Go to Hell). They’ll find the exact spot, near a hollowed out tree, and dig their way through the layers of hell until they find the one Maxine is in, and bring her home.

They’d better watch out for Cerberus, the multi-headed dog that supposedly patrols the banks of the River Styx, at the entrance to Hell in Greek myth. Nathan thinks he hears him. 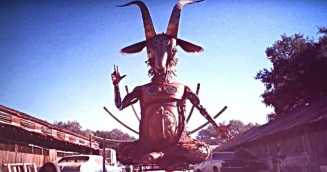 Flickering flash-cut black and white inserts interrupt this quest, images of Satan in the shadows, of people being tortured. Odd noises blast out of the soundtrack, too. Which of these trigger viewers’ deaths?

The footage looks properly grainy in some scenes, the light has a hint of that “Eastmancolor at dawn” flavor common to the movies of the day.

And the kids? They soldier on through layers of Hell described by chapters labeled “Nefastas,””Malificus” and “Demonium.”

I appreciate the effort here. The idea is sound, but the script needed several more passes before they committed to shooting it. The odd Cyrillic titles suggest a funnier way to go — shoot the damned thing in Hungarian, make the “legend” more exotic and foreign. It’s not like we’re told this is a Hungarian or whatever print that was found recently in Connecticut.

The “Look, a DEMON” bit is the only thing here that’s funny, and that’s another direction one could have taken “Antrum.” Cult films like “The Room” are often laughed at.

“Antrum” has no other laughs, and unless you’re a rube who falls for every “Hey, you guys, this REALLY happened” on the Internet, there’s not much here to hold our interest.

“Antrum: The Deadliest Film Ever Made” isn’t amateurish enough to be charming or professional enough to pull off the con job.