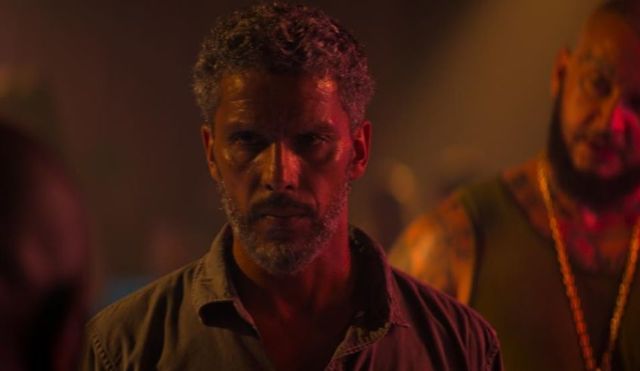 Sure, it’s drinks and strip clubs, beaches and hot Thai food when brothers Mehdi and Hicham see each other for the first time in 15 years.

You’ll love Thailand, younger brother Hicham crows. And not just for the scenery, the red light district, the easy living and the vices.

But you know it can’t last. Not when you realize where Mehdi (Sami Bouajila, who first gained notice in the Arabic-French WWII film “Days of Glory”) has been for the past 15 years.

That opening scene, of the bank heist that devolved into a shootout? That’s where he was captured. Hicham (Tewfix Jallad of “Fast Convoy”) got away. So did the other four members of their gang.

They’ve been living large, free as birds, running their own businesses in “paradise” off the money from the bank job. And Mehdi doesn’t want to hear their “You’ll LOVE it here,” in French with English subtitles. No.

That’s the dramatic problem that “Paradise Beach,“ a French potboiler of a crime thriller that plays that familiar “Sexy Beast/Point Blank” card, the member of the gang of thieves here to collect what he thinks is owed to him.

Of course, there’s no simple answer, as Jimmy Stewart told the old “building and loan” depositors during the run on the bank in “It’s a Wonderful Life.” The money’s tied up in this bar, that restaurant, my yacht, his beachside bungalow.

Damned Thai law won’t let foreigners (“falang”) own businesses. Put everything his his wife’s name, or that conniving partner’s name.

And Mehdi, man, that tsumani? It wiped us out?

But Mehdi won’t accept that answer. And when it comes down to these businesses that they’re running, nightclubs filled with stripper/hookers, the old gang is getting handed its head by the new gang — Afro-French expats who have moved their human trafficking business from Morocco to Thailand.

Marrying into a cop family didn’t help. Keeping girlfriends and spouses in the dark about their line of work wasn’t smart.

Mehdi? He’s fresh out of the joint and not shy about throwing his weight around.

And director and co-writer Xavier Durringer isn’t content with that direction, either. The story coasts to a halt, for all intents and purposes, as Mehdi’s old flame Julia (Mélanie Doutey) shows up, the gang breaks down into factions and the other gang isn’t about to back down.

Women are pawns in this story, kidnapped and traded, increasingly furious at what they never realized and how their husbands’ business is now threatening their lives.

Bouajillo makes a grizzled, compelling anchor for all that’s spinning around Mehdi. It’s a pity the film loses track of that. The supporting cast of actors playing “types” make strong impressions, but never strong enough to transcend the cardboard cutouts they’re playing — the loyal comrade, the bully, the punk with something to hide, the brother who takes blood ties the most seriously.

The third act is a nonsensical collapsing house of cards with corrupt cops, blood feuds and mayhem

that points to panicked meeting in somebody’s hotel room where one screenwriter said to the other screenwriter (in French, with English subtitles), “We finish filming tomorrow. How the hell do we END this thing?”