Movie Review: Mexico’s shot at the Oscar belongs to “The Chambermaid” 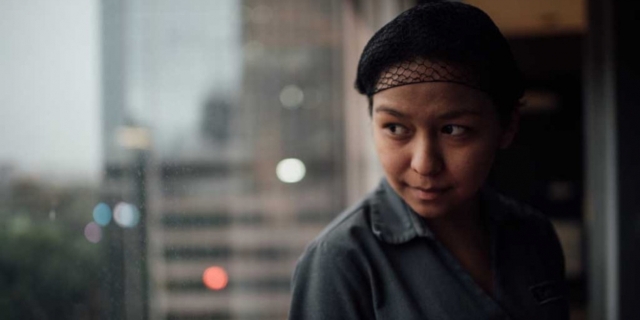 Thoreau famously decried the fact that most “men lead lives of quiet desperation.”

But the author of Walden never spent time in a modern hotel. You want to talk about “quiet desperation?” Invite a woman who cleans hotel rooms into the conversation.

“The Chambermaid,” Mexico’s choice to compete for a Best Foreign Language Oscar, is an intimate character study. Just follow Evelia through her routine, track her interactions with wealthy guests, fellow staff and her boss.

Don’t have her talk about her thin hopes for the future, her despair at her lot. Just show it.

Eve (Gabriela Cartol) might be the perfect camarista. Hair in a bun under a hairnet, a plain Jane housekeeper of 24, she takes the daily impositions and dismissals of her work with poker-faced equanimity.

Guests look right through her, even when they’ve utterly wrecked their room and she has stumbled across their half-blitzed body under a pile of bedclothes on the floor.

Director Lila Avilés, also the film’s co-writer, puts us on Eve’s wavelength straight away, a “Buenos dias, camarista” knock on the door, sizing up the disaster area of the room she’s here to clean, plowing into it even as she has trouble deciding where to start.

No time to think this through. Just tidy up, pick up, dust, wipe or scrub everything your hands can reach as you dash from bedroom to bathroom.

There’s a toothbrush she uses to scrub phone receivers, a dust rag she wields like a bullwhip, flicking it at lampshades, a trick she’s picked up to perfectly flatten the linens she’s put on the freshly-made bed.

An item a guest has left behind demands a radio call, reporting it in. To “lost and found” it will go. And hey, Eli (head of housekeeping), about that beautiful “red dress” she found earlier? Anybody claimed it yet?

Eve has a floor, 21. Her dream is a promotion — to the more swank (suites, not rooms), less work and better tips of the 42nd floor.

Eve has a little boy at home, whom she calls in to check on when she can get a few spare seconds on a staff phone.

And she has a suitor, a window-washer who tries to get her attention through the windows of rooms she cleans, drawing a heart on a soapy window. Eve closes the drapes, not giving him the time of day.

Her boy’s father? We can only wonder.

The mad rush through the day is interrupted, almost constantly it seems, by the custodian of the locker room — who wants to sell her something. A Jewish guest needs her to operate the elevator for him on the sabbath. A colleague needs her to help clean a room or two so she can be on time, or sends her into a guest’s room where a spoiled, bored rich mom talks her ear off, tipping her to watch her newborn baby while mom can take a quick shower.

The lady’s prattling reveals the gulf between their worlds. She’s on about flying to Buenos Aires with her husband, the boredom of staying in high-end hotel beds all day with an infant.

“That’s no life!” she complains (in Spanish, with English subtitles).

Eve’s stoicism is tested by a GED class she joins for employees. How will this stick-to-herself introvert fit in?

A fellow camarista, Minitoy (Teresa Sánchez) is a little too friendly, she and we think, a bit too eager to befriend her. Of course she wants something, we figure.

The incidents that break this routine are few, yet fraught in their own way. Each emphasizes the world and the life that has shrink-wrapped Eve, made her smaller, lowered her horizons to that next patch of floor to be vacuumed, that next toilet to scrub.

Will she ever rebel, or has she found a way to cope that makes this life a trifle less desperate?

As with most subtitled movies, “The Chambermaid” won’t be to every taste. The little moments of melodrama don’t wholly animate a fairly static character study.

I still found it engrossing, and in a country where most hotels have chambermaids that look just like Evelia, occasionally moving and often troubling.