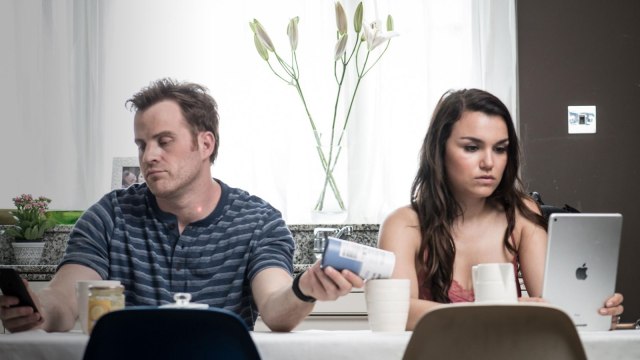 When the mind wanders during a comedy, or any film that isn’t quite working, the only constructive place to let it wander is to one question.

“Why did these attractive, talented people (the cast) decide to do it?”‘

Sometimes the answer is a payday. Mostly, it’s because the players see enough in the script and their read on how gifted the director is to take a gamble.

It’s also a dead give away that they pay a lot more attention to the final act than the first.

“For Love or Money” — the latest unfortunate comedy to wear that title (Michael J. Fox was in an earlier one) — begins badly and goes on and on with virtually no signs of life, or at least laughs.

The priest at that wedding lapses into “blah blah blah” about the deceased. And “etc. etc.”

Our story’s hero, played by Robert Kasinsky (“Pacific Rim,” “Hot Pursuit”), showed up to “make sure” his childhood tormentor was “really dead.” Mark uses this opportunity to chat with his childhood crush, Connie (Samantha Barks of “Bitter Harvest”).

“Are you seriously making moves on me at my boyfriend’s funeral?”

The lovably loutish best friend (Tony Way), the big business wheel who has been Connie’s “side piece” (Ed Speleers), the major players have nothing laughable to say or do.

Bit players are the only ones with a shot — the priest whose wedding instructions include “Speak now, or shut yer face,” the waiter who interrupts clumsy, unconfident Mark’s attempts at date night small talk with — “Just relax. Be yourself.” — before he opens their wine and instead of giving Mark or Connie that first sip to confirm it’s quality, sips it himself and says “‘S’alright.”

Because Mark and Connie do get together. He has a tech fortune that’s coming his way when he sells his big invention, the sleazy Johnny (Speleers) knows about it and convinces Connie that she can get half of Mark’s money if she just dates and marries him.

What must have gotten the cast’s attentions and lured them into “For Love or Money” is what happens next, and what goes on for the entire film’s length. Mark learns of their plot only after getting engaged, and spends the rest of the movie exacting revenge on her via pranks, insults, public and private humiliations.

He sabotages her coffee, puts hair remover in a shampoo bottle, buys clothes to match and replace her wardrobe with sizes too small, and reinforces that with cracks about her weight.

And as Mark enlists former roomie Tim (Way), old school chum and Connie-hater Kendra (Rachel Hurd-Wood) in the scheme, we see Connie brought low, and lower. She takes it because, well, she’s that greedy.

“If I have to ‘fake it’ any more I’m going to have a brain hemorhage!” 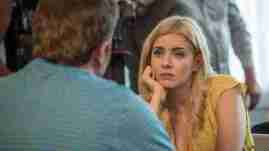 The revenge part of the tale, its dominant element, is usually a tiny portion of such movies. Maybe she gets wise to him being wise and turns it around, or maybe she starts to feel shame and then affection, etc.

What “For Love or Money” reaches is Mark figuring out if “There’s a big difference between getting your dignity back and getting revenge.”

The third act’s shifts in tone would if the first two acts had been the least bit funny. They aren’t. The script, co-written by the director and joked-up by another writer, has feeble jokes and worn situations, characters as caricatures, every comic sin in the book.

The leads are never quite engaging and not remotely amusing.

If we feel anything for their characters, it might be pity but never rises to sympathy or righteous glee at Mark’s avenging himself on a cruel, greedy person out to wreck his life.

Even those of us who get a grin out of British accents and British jokes and slang will find this not worth bothering with, “For Love or Money.”