Movie Review: Haven’t we seen “Brittany Runs a Marathon” before?

Posted on September 13, 2019 by rogerinorlando 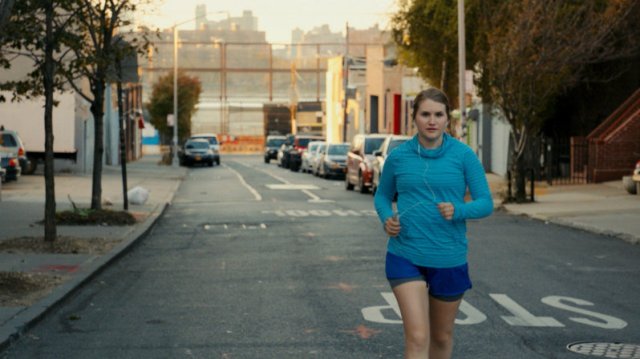 Maybe there aren’t a hundred movies about somebody taking stock of their life and deciding “the ultimate test” of running a marathon will help them change everything for the better.

But including documentaries and episodes of TV series? Yeah, it’s common enough.

The dismissive take on “Brittany Runs a Marathon” is a makeover movie of the “Bridget Jones’s Diary” variety — “put-upon fat girl gets fit and finds love, health, happiness and renewed purpose.”

But it’s also a little more than that, a story of an unpleasant woman wrapped up in self-loathing and body image issues who might start to engage with others once she starts to love herself.

Still, to accomplish that — “judgemental” movie cliché here — she’s got to lose weight.

“Brittany” is played by Jillian Bell, a comic actress often cast as the the testy, plus-size wife (“The Night Before”) or the plump best friend or member of a pack of friends (“Rough Night”).

Here, she’s a downtrodden cliché — a 28 year-old who stress-eats at every reminder that New York, and life itself, is “fat shaming” her. Her low-self-esteem is an plain as her double chin and a top-knot hairstyle that screams “Who cares?”

Her petite and pretty roommate (Alice Lee) drags her to the clubs, and if she’s lucky, lets Brittany paint her toenails for her when they get home.

The only guys to take notice of her prey on her sense of self. Of course you’ll join me in the bathroom — on your knees. That’s how little you think of yourself, why should I be any different?

Brittany sleeps until the crack of noon, and tries to crack up the patrons at the theater where she’s an usher, a job this once-aspiring advertising jingle-writer could lose at any moment.

These early scenes are meant to establish a bubbly person smothered by weight and depression, and Bell is better at the smothered part than “bubbly.” Brittany may be acting out the “funny (fat) person comically compensating” stereotype, but neither the writing nor Bell’s performance of it deliver many laughs.

Having a character say “You’ll always be the funniest person I know” doesn’t make it so. 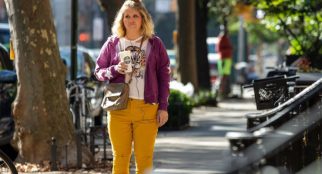 She doesn’t let it out to her roommate Gretchen, or to her adoring, nurturing brother-in-law on Skype (Lil Rey Howery). But she lets the photographer-neighbor she nicknames “Moneybags Martha” (Michaela Watkins) feel her wrath. A Fitbit fascist who’s always jogging, she just brings out Brittany’s desire to add another pizza box and jumbo bottle of “Cannonball” wine to her collection, after another night of getting hammered at the club with Gretchen.

A trip to her doctor is her wakeup call. At 5’6″ and nearly 200 pounds, drinking and sedentary, Brittany is headed for a shortened life of major health issues. And even if she isn’t telling her doctor or anybody else, she knows how young her obese father was when he died. Seeing her “real” self in the distorted chrome reflection of a hot dog cart seals the deal.

Gym memberships cost money. Running it is. But as she begins, she rejects the encouragement of “Martha Moneybags,” real-name Catherine. “I don’t want your pity.”

She uses that word a lot. And “judgemental.” But if she’s angry, at least she’s channeling it into running — first a block, then a mile, then running with a jogging club.

Two things she picks up from Catherine (Watkins)? Set “tiny goals” in life, and in running. And everybody is dealing with something. If she ever stops calling her “Moneybags,” perhaps she’ll see that.

Writer-director Paul Downs Colaizzo builds the picture on a conventional framework. We watch Bell transformed from multiple chins to a single one in short order.

The obstacles are generic, too. Progress, then a setback. A little boosted self-esteem has her sign up for OK Cupid, but promising dates are abandoned, awkwardly.

Brittany is still working on Brittany.

Her renewed ambition has her take on pet-sitting/house-sitting work, which runs her afoul of 30something “entrepreneur” and slouch Jern, amusingly played Utkarsh Ambudkar of “The Mindy Project.”

There might be “something” there, if only she can see it, if only Brittany can get past Brittany issues to let it happen.

Colaizzo fearlessly makes a movie about body-shaming that indulges in more than a little of this as it does — extreme close-ups of body parts oozing out of tops and shorts. The “health” angle allows the picture to separate itself for the curvy-and-proud comedies of Amy Schumer (“Trainwreck”) or America Ferrara (“Ugly Betty,” “Real Women Have Curves”).

But those movies had more emotive, funnier stars who gave us a sense of joy that came with accepting themselves. As complicated as “Brittany” the character and the character comedy can seem, both still feel “judgy.”

And Bell, parked front and center in a tale built around her, never lets Brittany truly blossom. The bitter, like the body fat she’s lost, clings to the character and makes any attraction anybody else might express for her feel contrived. The performance is muzzled when it cries out for exulation.

She’s not unattractive, except when the movie goes out of its way to make her so. But Bell’s screen presence isn’t warm or engaging and the script’s jokes aren’t good enough to transform that.

We know where the finish line to “Brittany Runs A Marathon” is, and have a very good idea what’s standing between it and her goal of crossing it.

It’s just that while Brittany might smile most days when she steps on a scale, we feel no joy in her for what she’s doing. We feel none of the thrill that her new friends express at reaching her “tiny goals” and her biggest one.  That makes this a comedy that never quite reaches the finish line.

MPAA Rating: R for language throughout, sexuality and some drug material