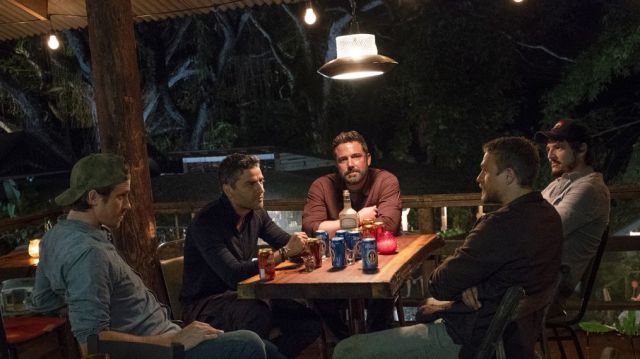 Years ago, I had a lunch interview with the journalist/screenwriter Mark Boal (“The Hurt Locker”) as he passed through town promoting his second film with Kathryn Bigelow, the Hunt for Bin Laden epic “Zero Dark Thirty.”

The conversation wrapped up the way these things usually do, with “What’re you doing next?”

He launched into a lovely and lengthy description of what he hoped he and the director would wrestle onto the screen, a tale set in the middle of nowhere South America — the lawless drug lords/smugglers’ jungle where several countries’ borders intersect, the “Triple Frontier.”

He and Bigelow found it far easier to get their grim story of police murders during a race riot, “Detroit,” (2017) on the screen. From the looks of the “Triple Frontier” that finally was filmed, for Netflix and without action auteur Bigelow behind the camera, they never did get a handle on a story that takes us there.

J.C. Chandor (“All is Lost”), a fine director and writer in his own right, directed and co-wrote what turns out to be an utterly generic yarn about warriors pulling a heist.

Yes, they’re robbing a drug lord. But they plan on assassinating him as well. So even though they’re not “wearing that flag on my shoulder,” they’ll be performing righteous work and doing the world a favor.

Yes, the amount of money is insane. Greed gets the better of our heroes.

Yes, there’s a woman insider, an “informant,” who can get them close.

The plan is elaborate, and elaborate plans go wrong — in the real world and especially in the movies.

And yes, we must have the obligatory “I’m getting the band back together” assemble-the-team scenes in the opening act.
Oscar Isaac is Santiago, the U.S. “asset” working closely with law enforcement in South America as they hunt the elusive drug lord Lorea.

He’s always half a step behind, despite Santiago’s efforts to protect his best source inside — Yvonna (Adria Arjona).

But when she gets a “promotion,” he sees his best chance yet. And the fact that she’s doing money handling, he sees a score — legal, or at least quasi-legal — that sweetens the deal.

With the promise of a government guaranteed percentage of the take, the guy his brothers in arms nicknamed “Pope” tracks down the old gang with a piece of work that could get them all paid. Millions are at stake.

“Do we finally get to use our skills for our own benefit?”

That gets the attention of the reluctant retiree turned real estate agent “Redfly” (Ben Affleck), of “Ironhead,” (Charlie Hunnam), a by-the-book commando turned officer who gives pep talks to younger commandos to keep them from leaving government service to become “contractors,” his swaggering, whooping, cage-fighting younger brother (Garrett Hedlund) and a cracker jack pilot (Pedro Pascal) who lost his license, but doesn’t need one “where we’re going.” 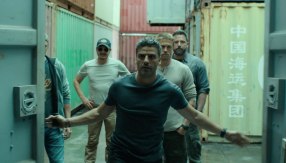 The formula, chiseled in stone in combat films (“The Dirty Dozen”) and Westerns (“The Magnificent Seven”) since “The Seven Samurai” laid it out 70 years ago, always makes for a watchable film, even if it as predictable as a Rolex.

Pepper the collection of tough guys with tough guy dialogue.

The homoerotic brotherly bonding of warriors is sealed with a smirk.

That makes for an action picture that is perfectly watchable, and perfectly generic. There’s not a surprise in this thing, from the “one last mission” to “the code” (which they violate) to the “Treasure of Sierra Madre” pitfalls of confronting that much cash to the tough talk of men at arms.

That runs from “I miss this” to “Stock boy job at Walmart’s starting to liok pretty good right now.”

Hedlund has the best lines and makes a great case for future employment in movies of this genre. Affleck is reliably reliable in such roles, Pascal (of TV’s “Narcos”) impresses and Isaac is more prepped for action here than he was in “Operation Finale” or the “Star Wars” movies.

Hunnam has the flattest character to play, something that doesn’t help a guy who always comes off as a less interesting, less fun version of Hedlund, even in movies where they don’t co-star.

As for the movie? “Netflixable” to me means anything that kills a couple of hours while I’m waiting to see where the hurricane hits. “Triple Frontier” does that. But nothing more.

MPAA Rating: R for violence and language throughout