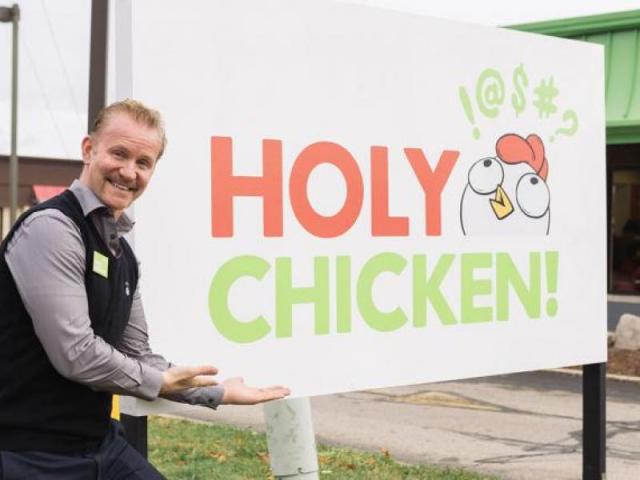 It’s the movie that could make you fall in love with Morgan Spurlock, all over again.

With “Super Size Me 2: Holy Chicken!” the quixotic documentarian returns to his first, best destiny — investigating fast food and the “myth” that it’s gotten better in the dozen or so years since he almost killed himself gorging on it with “Super Size Me.”

Since then, Americans have gotten fatter, and to all appearances more gullible. So Spurlock digs into this rebranding and spin, with its new brick restaurants with fake wood decor and green imagery, the “health halo” fast food has been giving itself, and pulls back the curtain on their ability to make us believe what we want to believe.

He wants us to know that “free range” and “artisinal” and “all natural” and “No GMOs!” and “healthier” mean nothing in our fast foodie culture.

Burger America is giving way to Chicken Sandwich America, and Spurlock explores why that is and what the consequences of it are — to consumers, farmers and fast food employees.

He finds a new villain, “Big Chicken,” which isn’t that new a villain. We know the evil Koch family is involved (and Perdue and Tyson and Sanderson Farms and Pilgrim’s), and we’ve known about the “indentured servitude” they put farmers in when they sign on to their “Tournament System” of rewards, punishment and “control” since “Food, Inc.”

And he sets out, in this 2017 film just now making it to theaters (Big Chicken strikes again?), to study the market with food, nutrition and restaurant consultants, to visit the competition — reading the MSG on the menu at Chick Fil A (“It’s how they hook you on their sandwiches!”), noting how a Wendy’s chicken sandwich (“It’s like somebody cleaned the grill with a cleaning solvent”) and Burger King’s inedible “chicken bits ground up into…a chicken mitt!” leave the field open for something better.

Which is what he sets out to do, open his own chicken sandwich franchise with “farm to table” branding, renting a grow house in Alabama to raise his own “free range” broilers served in a fast food joint with truth in advertising filling the walls, the cups, the food wrappers and the floor.

Yes, a tiny piece of the Holy Chicken lobby measures out how much square footage you have to have in the open air to call your birds “free range.” It isn’t much.

It’s when he’s riding around with a couple of food consultants, going from Chipotle to Wendy’s to Popeye’s to Chick Fil A to Burger King and McDonald’s that we wonder why this guy needs experts at all. He is THE expert on fast food, its unhealthy ingredients and the underpaid people who create it, all up and down the line.

But let’s see how hard it is to buy a few thousand chicks when Big Chicken controls most of the hatcheries, how Big Chicken punishes a farmer who rents him a “grow out” house to start his enterprise, what maladies hit chickens forced to grow to many times the size they used to grow in a fraction of the time.

For that, he visits a veterinarian who does a chicken necropsy with him. They die with bones breaking under the excess weight they’re raised to reach. The poor cluckers have heart attacks due to the strain. 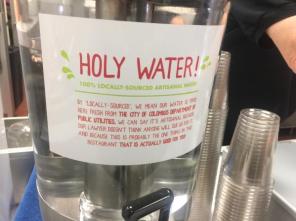 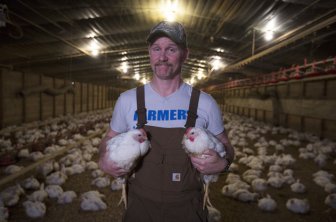 As with other films he’s made, he points out it’s all about “the story,” the spin, how food consumption trends drive us to seek “bucolic, farm images” that exist only in a fantasy past — or in “The Biggest Little Farm”.”

We learn about the “health halo” that marketing and advertising agencies help restaurant chains attach to the food that is no longer “fried,” that’s “the F-word.” It’s “crispy.”

And yes, he really did open a restaurant.

There’s a laid back confidence to the jokes, a flippancy to his chats with corporate types, consultants and nutrition experts, and a down home connection to the interviews (a farmer cries, fast food workers decry their exploitation) with real people trapped in this onarus machine.

True, he is covering ground he and others have covered before. But the simple fact that we’re getting fatter and unhealthier suggests that this is Spurlock’s true mission in life, to wipe away the “fake” USDA “regulation,” the “fake” euphemisms that saved McDonald’s as it adapted to a changing landscape (The food is still inedible swill, he suggests on visiting one for the first time in over a decade.), the lies we’re letting ourselves believe as our arteries clog, our waistlines bulge and we wonder why we feel so bad after gorging on yet another meal in a place that won’t let “facts” get in between you and your fix.

“Honesty never tasted so good,” he says. It’s still fried, still loaded with fat and calories. But at least now we know, thanks to “Morganic Farms” and Morgan Spurlock.