Movie Review: For a soap star, life catches up, “Before You Know It” 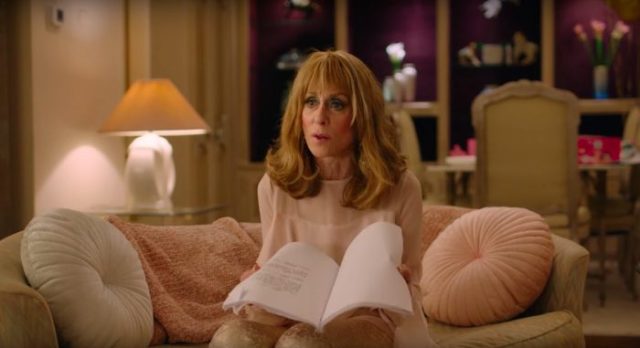 There isn’t much to “Before You Know It,” but where there is I have to say I absolutely adored.

It’s a sisters comedy, one of those “walking and talking New York” tales of mismatched siblings, dysfunctional parents, and the frothy, just a tad bitchy world of “the-A-tuh” actors and the soaps. And there are just enough delights scattered throughout — in the situations, the snappy banter, the performances and the milieu — to put it over.

The sisters grew up with the “unconfirmed” rumor that their mother was an actress. She died when they were little. Dad raised them in the Village’s Gurner Family Theatre, where they helped him put on the decades of flops he’s written since his acting peak (the early ’70s) passed.

Jackie (Tullock) has a fizzy, dizzy, impulsive side, just like her dad. An actress, she’s raised a daughter she incongruously named Dodge (Oona Yaffe) in that same, roomy basement flat underneath the theater that she’s shared with Dad and Rachel for 30 years.

That’s a little mean. Rachel is the stage manager of the theater, which earns most of its money by hosting support group meetings. She’s producing Dad’s latest play, “The Way I See It,” “which could actually BE something.” She’s editing him.

“It’s my play,” he sniffs. “It’s my play and I should be able to do what I want with it, right? Inserting yourself in the process does not make you a playwright!”

“I just need you to have a life so that I can finally have one,” Rachel confesses. It’s a pity play she’s producing. She’s a thirtysomething New York lesbian who can’t manage a relationship, and the trap of Life with Father…and sister and sister’s kid is what she blames for all that.

Jackie’s never had a role-model mother to help her with Dodge. Mom would have talked her out of the stupid name, for starters. And now she’s taking the kid to her first therapist (Alec Baldwin), one of those “just here to listen” guys she’s met at a wine tasting. If he wasn’t just listening, he’d ask Dodge what’s going on with making herself look like a “Third Rock” era age-12 ringer for young Joseph Gordon Levitt.

And then Dad has his last death scene.

You see as many movies I have, what you find yourself hoping for is the odd “perfect moment,” something with a dash of “Welp, never seen THAT before.” The first one here is when Dad has to give a speech to an off-Broadway theater’s fellowship committee, the people who are offering a “real” theater and cash to get his play produced.

Patinkin’s Max bursts into nonsensical song when asked to make a speech, and ends with a raspberry when that’s not enough — self-destructive to a fault. 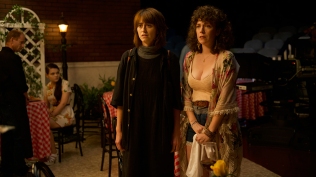 The second perfect composed, staged and acted scene comes in the office of the daffy lawyer (Ben Becher, killing it) where the sisters read Dad’s will. Rachel figures out that their mother isn’t dead in a pregnant pause, staring at a computer screen, looking at a Googled photos and bio of the name on the deed of the Gurner Family Theatre and asking, “Why is a soap actress…listed as co-owner…of…our…building?”

Jackie plays catch-up, and eventually gets there, too. And “the impulsive one” immediately sets out to meet the elusive Sherrell Gearhardt, forcing Rachel to chase after her as she dashes for the “Soap City” (Manhattan TV production center) studio where Gearhardt has been on TV for the past 30 years.

“I’d say we could just flirt our way in. But you decided to dress like a Menonite caterer today.”

Judith Light plays Gearhardt, who has some of Jackie’s grasping ditziness and a touch of Rachel’s smarts and kindness. They all “meet cute,” but the daughters withhold big chunks of their story from her out of wariness.

Meanwhile, Jackie and Rachel have lost track of Dodge, who falls into the care of their just-hired accountant (Mike Colter, TV’s “Luke Cage,” always good). And that’s where Dodge, who lacks real-world role models, falls in with the accountant’s slightly-older daughter, Olivia.

Here’s the third perfect moment of “Before You Know It.” The girls, barely getting along, bond over something Olivia (Arica Himmel, bubbling over with personality) has experience with that Dodge doesn’t. A big-screen “How to use a tampon” lesson is the very definition of “Welp, never seen THAT before.”

The play within a play, viewed through a single scene rehearsed, rewritten and cast throughout the film, is “Bad Theatre” without being funny. The “Soap Dish/Tootsie” soap opera recreations are more amateurish than the real thing, and dated-feeling to boot. Have our co-stars/co-writers (Utt also directed) never watched a soap in this millennium?

But the relationships here all impress and defy expectations. The screenplay finds new twists to timeworn actor’s life cliches, and Tullock and Utt discover new wrinkles to the “stunted emotional growth” that dysfunctional families tend to produce in such movies.

There isn’t a bad performance in this, and sweet-talking Tim Daly into a bit part as a soap co-star, Baldwin into a two scene cameo and the famously persnickety Patinkin into taking on their father figure and letting it all hang out, are just bonuses.

Sitcom veteran Light brings a fragile majesty to Sherrell, stuck in the security of a TV show where the writing was never great, but has become more hackneyed with every passing decade.

Yaffe lends real-world drollery to Dodge, who never has a line too clever for a 12 year-old to think up and say. Her arrested development mom is self-involved, forgetful, loves her wine too much and is late for everything.

And as the sisters, Utt and Tullock are walking, talking, weeping and kvetching endorsements for that age-old actor’s maxim, “If you’re not offered good parts, WRITE one for yourself.”

Which they did, and if there’s any justice, “Before You Know It,” they’ll get to write, produce and star-in another.