The world’s had plenty of time to make up its mind about David Crosby of Crosby, Stills Nash & (sometimes) Young. Heaven knows the man himself has given us the necessary data to form a defensible opinion.

“Mouthy, self-righteous, self-destructive druggy” kind of works for some of us. His recent years, post-prison, post-recovery, post-“eight stints put in my heart,” maybe that’s softened a bit.

Then he’d go and do this or that. And we had our final cue. If the sweet, patience-of-a-saint Graham Nash, of “Our House” and “Teach Your Children” has given up, cussed him out and finally moved on, what business do we have sticking around?

Great harmony singer, fair picker, not the “hit songwriter” in any of his groups, a two-time Rock and Roll Hall of Fame inductee based on the harmony singing and rhythm guitar work, he’s gotten what he needed from “us,” what he deserved.

So hitting us and his interviewer, Fanboy’s Fanboy Cameron Crowe, with “I’m afraid of dying…and I’m close” at the opening of “David Crosby: Remember My Name” may move some to forgiveness, or closure or even redemption.

But I’m not sure this myopic “write my own obituary, and be brutal about it” film accomplishes that.

Crosby is an old man of 77 who teeters back and forth between “regrets” and “I have no regrets” here, admits using and misusing friends, colleagues and women, takes us down the heroin hole and into prison in Texas with him and regales us with tales of the Good Times — those early years of Crosby, Stills, Nash and then Young.

“Remember My Name” lacks fresh interviews with those many ex-collaborators who hate his guts, save for Roger McGuinn and Chris Hillman from The Byrds. Crosby was kicked out of that ’60s folk-rock group for turning “insufferable,” and there’s ample footage here backing that up.

Here he is at the Monterrey Pop Festival, blurting out his Kennedy Assassination conspiracy theory to a late-’60s audience that might have cared, but probably didn’t.

“Being a star makes you feel like you’re more important than you really are,” McGuinn explains. He and the other Byrds have long suffered the slings and arrows of Crosby’s unjustified mockery, but at least he and Hillman sat down for interviews, and participated in an animated recreation of the day they “fired” Crosby.

Stephen Stills isn’t here. The Graham Nash and Neil Young interviews are decades old, most of them, save for the recent ones where they say “never again” to the idea of working with Crosby.

I was pining for a chat with Melissa Etheridge, who had Crosby as sperm donor for the baby she had with Julie Cypher. She’s not going to take back that decision, no matter how much more Crosby flotsam has battered its way under the bridge in the 20 years since. But curiosity about how a prickly, self-absorbed and unfiltered diabetic and recovering addict was ever “the perfect choice” lingers.

Crowe and filmmaker A.J. Eaton chat with Crosby, get him to take them and us on a tour of his old hangs on the Sunset Strip and Laurel Canyon, where “I was the first (musician) to move here” to “get above the smog,” that second fact left out of the warmer and more musical “Echoes of the Canyon” documentary.

And they follow the not-quite-broke Crosby on the road during a 2017 tour, in fine voice singing his recent originals with a tight band, reveling in the “creative rebirth” that old farts’ music magazine Rolling Stone heralded five years ago.

His wife Jan frets that every time he leaves for a tour “I know he may never come back,” and he is quick to do what we all do in our ’70s — list his many life-shortening maladies. “When the light does go out, I hope it’s when he’s singing,” she adds.

But the film has no trouble at all making the case that it’s been a fascinating life.

The son of a “humanist” and an Oscar-winning Hollywood cameraman, Floyd Crosby, his older brother Ethan is the person he credits with getting him into music.

He won’t name the person who first gave him heroin.

“We took everything we had, and everything everybody else had,” Crosby recalls of one memorable “smashed” night in Chicago, going out to hear John Coltrane.

“There was boundaries I crossed that you haven’t thought up, yet,” he boasts. “I hurt a lot of girls. I hurt a lot of people…Were these girls addicted? Yes they were. And I did it.”

A ride-along in an Escalade takes them to the house where McGuinn and Hillman “fired me…came up in TWO Porsches,” and the house Graham Nash used to live in where Crosby, Stills & Nash formed, realizing “within 40 seconds” Nash has said, that they’d be great together.

“Our House” was composed there, while Nash was living with Joni Mitchell, who’d broken up with Crosby right before that.

On tour, the lilting voice and masterful vocal control is still there, as is the political fire. He gets all worked up all over again upon visiting the museum at Kent State. Neil Young admits Crosby was a driving force in getting him to write (Four Dead in) “Ohio.”

Crosby was the guy in the band who bought a sailboat (financed by Peter Tork of The Monkees) basically when he was in between bands. So he had a hand in inspiring “Southern Cross,” too. 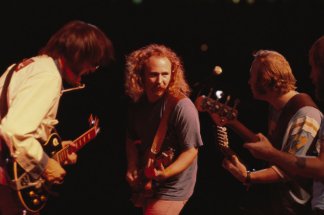 But the history lesson and performance material don’t lighten the film. The shadow of death hanging over it doesn’t give it the gravitas of the wonderful and poignant Glen Campbell documentary, “I’ll Be Me.”

Crosby making the argument that Crosby, Stills, Nash AND YOUNG deserve to be admitted to the Hall of Fame, along with The Byrds and CS&N, is so self-serving that it grates.

And we understand all the hard feelings and “insufferable” label that have attached themselves to the guy.

Documentaries are utterly reliant on their subject to be appealing, and while “Remember My Name” does soften him a bit, it’s hard to make the case that it merits a total reevaluation of the man and his music.

He wishes he had more time, he says, wishes he hadn’t wasted years of his life being “smashed.” Perhaps its going to take more time for music lovers outside of his generation to appreciate him fully, as a creator and collaborator.

Let’s just say “Remember My Name” shows us, and him, the start of that process.