Movie Review: Not as fast, just as furious — and funny — “Hobbs & Shaw” 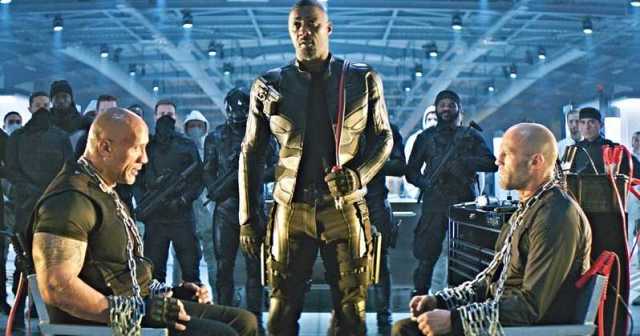 “Hobbs & Shaw” is an action comedy that pulls out ALL the stops. And then some.

It flollops along, cheerfully riding on the sparkling chemistry between its leads, a well-cast villain who is the epitome of “heavy,” impressive fight choreography and polished “Bourne Identity” editing, never forgetting for one second that it’s all just violent, dumb fun.

Man is it dumb. And boy, does it go on and on, lurching to a stop for the odd moment of sentiment, zinging by only when it turns the each-other’s-equal leads — Dwayne Johnson and Jason Statham — loose on each other for braying trash-talk tirades.

Overlong it may be, shoehorning more of that “Fast & Furious” “family” and “home” sentimentality into an epilogue that turns into a third act AFTER the third act. It can be dull for stretches during that excessive length. But the picture rarely bores.

I will mention its ridiculous full title  — “Fast & Furious Presents: Hobbes & Shaw” — just this once. Over-the-top in title, action beats and performances, you can’t exactly call it “good.” The pace, the absurd plot, the endless pauses for fan-pandering (shockingly big-name cameos) wipe that idea right out of one’s head.

But hell, it’s funnier than all the “Fast & Furious” movies preceding it, put together.

The plot involves a stolen virus that could thin the Earth’s “herd” of “weak” humans, if unleashed. A British agent (Vanessa Kirby of the last “Mission: Impossible”) kept it from the supervillain Brixton (Idris Elba), but thanks to Brixton’s media manipulating minions, the world thinks she’s the bad guy. 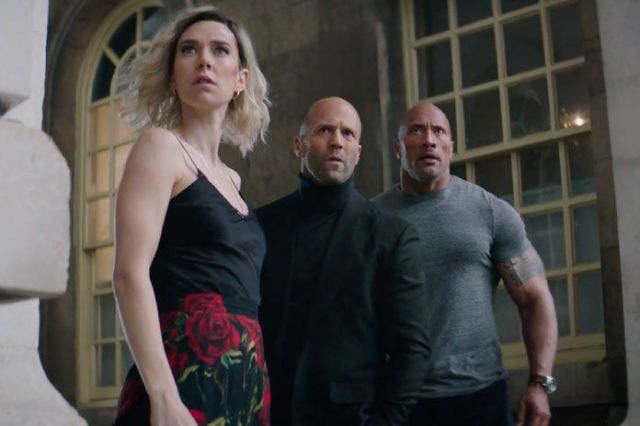 We need America’s best, Hobbs (Johnson), and Britain’s next-best-thing-to-Bond, Shaw (Statham) to bring her in, foil Brixton and save the world.

Pity they hate each other’s guts. Put them in a room and let the trash talk begin.

It’s “She-Hulk” this and “Mr. Arson” that, “sumbitch” versus “wanker” and a LOT more, with stuntman turned director David Leitch (“Deadpool 2”) giving us full-face/full fury close-ups of the “Wanker” and the “Sumbitch,” two near-hairless action heroes who have mastered the beady-eyed squint and the tough-guy growl as they piled up the miles, scars and wrinkles in the genre over these past 20 years.

Whatever else one thinks of the movie, you’ve got to relish this pairing.

Elba may never get to play James Bond, but when his character declares, “I’m the Black Superman,” he makes us believe it. Johnson and Statham sell the idea that, fearless as Hobbs and Shaw may be, they believe it, too.

“We’re being chased by The Terminator!”

Eddie Marsan is perfectly cast as the meek not-quite-mad scientist who is but a pawn in all this testosterony testiness.

Leitch knows how to stage and shoot fights, and Christian Wagner and Elisabet Rónaldsdóttir edited them into balletic brawls of the Hong Kong action style.

It all gets to be a entirely too much, and as it does it just goes on and on — stopping for the odd uncomfortable pause, piling on the put-downs, loading up on Easter Eggs tying this film to other Universal releases outside the “Furious” universe, servicing the fans and then servicing them some more. I didn’t think it would ever end.

But through all the excess, the schmaltz, the digitally-augmented fights and the practically all-digital car chases and stunts, the marvelous cast keep “Hobbs & Shaw” from totally stalling out. Call it a bad movie you can’t help but laugh at, and with, and get the extra large popcorn. You’re going to need it.

MPAA Rating: PG-13 for prolonged sequences of action and violence, suggestive material and some strong language