Movie Review: French get their “15 Minutes of War” in 1970s East Africa 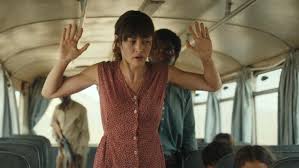 A tricky thing, making a colonial-era rescue mission thriller in our post-colonial age.

Do you pay heed to political correctness, or do you just let the visceral action, suspense and “us vs. them” violence work on that more primitive part of the brain?

“15 Minute War” is a tense, tight Franco-Belgian action picture that could have been made in the 1970s, and in some sense should have been. Along with split-screen montages, reggae and blues-rock on the soundtrack, military bravado and the never-dying myth of the “surgical strike,” “War” has political incorrectness is in its very DNA, along with classic action hero “types” and hostage-rescue thriller tropes.

Heavily fictionalized, but based on a true incident, director and co-writer Fred Grivois sets our scene with an opening title, days when “terrorism strikes Europe and the Middle East daily. Welcome to 1976.”

In Djibuti, the last French colony in Africa, revolutionaries are trying to force the French out. The terrorists/”freedom fighters” have the support of Somalia, the neighboring former British colony that had, since its independence, fallen under Soviet influence.

One day, four heavily-armed men storm onto a school bus and take the white children of diplomats and French Foreign Legionnaires on board, and the bus driver, hostage.

Twenty-one kids are taken, the driver is released to tell the French what has happened.

The kids speak French, the terrorists speak English –“NOBODY MOVE! No TALK!” But they make their best threats in French.

“Sit down and be quiet , otherwise (he drags his finger across his throat)!”

But their dash to the border, through beautiful rolling desert-scapes, falls just short. The kidnappers expect sanctuary in Somalia. But they and their prey sit in no man’s land, between the two country’s border guard stations.

Olga Kurylenko (“Quantum of Solace”) plays a teacher in the school who dashes to the border to “volunteer” to help. She evades the French, who have denied her request, and gets on board the bus to aid and comfort the children.

Meanwhile, in France, Captain Andre Gerval (Alban Lenoir) gets word of the incident while visiting his little girl, with his pregnant wife, in the hospital. He assembles his team.

Lorca (David Murgia ) shows off the ring he’s gotten his girlfriend, Campére (Michaël Abiteboul) his new quick-draw “Dirty Harry” shoulder holster. They and cynical Pierre (Sébastien Lalanne) join Gerval as he threatens their way onto a Cairo-bound commercial jetliner at the airport.

They’re snipers, a special police squad whose bluff, chain-smoking boss (Josiane Balasko) wants them to “prove what’s so ‘special’ about your ‘special unit.'”

There’s a “CIA Cowboy” or “CIA hippy” (Ben Cura) there to, um, “observe.” Some of the kids were American, and by the time they’re in-country, the American teacher is a hostage with them. So the U.S. is pressing for a solution.

The team is confronted not just with their mission, a “synchronized” five shots-at-once hit on the kidnappers from a vantage point they’ll have to crawl to reach, but with the usual “Well, if Paris grows a spine” political interference from home that such movies traffic in.

And the French Foreign Legion is there, with its macho brawlers looking down on the “gendarmes” (the team is civilian, “cops”) and cigar-chomping general (Vincent Perez) “waiting for orders” (always in French, with English subtitles).

The kidnappers are wired on khat and waiting for help from Somalia, and maybe the U.S.S.R.

The tough-guy talk is just as hard-bitten in French as it reads in the English subtitles.

“Do you even believe your own bull-merde?”

“L’Intervention” this was called when it opened in Europe, and it’s a film that lives on the conventions of its genre. We see tense countdowns as the snipers try to track their targets (the camera floats over targets, a bullseye in the rifle scope trying to keep the head in the shot). We hear bickering over orders. And we take the occasional trip inside the bus to see how the meek and worn children, their teacher and their tormentors, are faring.

Grivois, who directed “Tempus Fugit,” maintains a modest hold on tension. He narrows the film’s point of view so tightly that we don’t get much of a sense of the kidnappers’ motivation. This isn’t “Captain Philips” or any of the movies about Entebbe. The desperation doesn’t show, the aspirations of the revolutionaries are ignored.

And actions movies’ default “The military knows best” ethos has not been treated kindly by history. They don’t. “Snipers who never miss” is another myth that dies hard in these “surgical strike” pictures.

In the real world, especially with 1970s firearms, triage and technology, “surgery” is and was damned messy.

Still, it’s entertaining to see worn Hollywood tropes trotted out and acted-out in French. And the action finale, the actual “15 Minutes of War,” atones for many of the sins this solid B-picture tallies up until then.