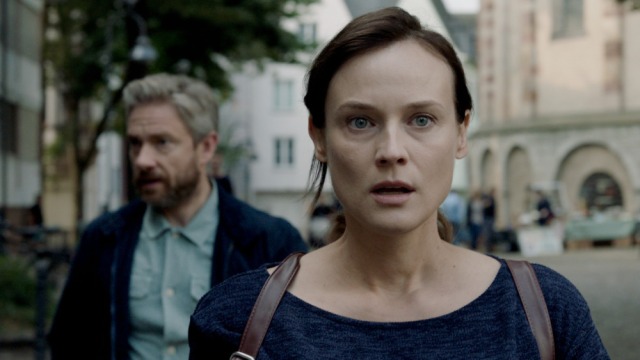 In the espionage game, your only loyalties are personal.

That’s been drummed into us in a century of spy movies, so why would “The Operative” have it any other way?

Here’s a solid, simple spy tale about a Mossad recruit, her handler and the Iranian who becomes her mark, her target and her lover.

The story, based on the novel “The English Teacher,” is framed within a debriefing that plays more like an interrogation. Thomas, pushed out of the spy corps, is summoned back.

A room full of brutish, bluff and blunt interrogators — even the men — want to grill him about “Rachel.” She just made contact with Thomas. But her bosses know more about where she isn’t. She slipped out of Israel. She did this and that in London, and hit another European city or two.

“Is it possible she was ‘doubled?'”

Thomas will only talk to his old handler, another personal relationship with someone he can trust. Joe (Yohanan Herson) hears the flashbacks that take us back to when Thomas turned a woman “who wanted to belong to something” from a sympathetic asset, willing to do a little of this or that, into a full-blown agent.

The script emphasizes relentless questioning, the building blocks of all the best spy fiction. Thomas peppered her back then just as Joe and others are peppering him in their German “safe house.”

Skipping past Rachel’s training is a plus. She is put into service in Tehran, first as a facilitator for a hit squad — which murders a Russian scientist, his bodyguard and an innocent bystander. Rachel then becomes the bait/agent helping the Israelis infiltrate a Tehran tech firm.

Her cover? She’s an Australian-born Canadian French and English teacher, moving from Germany to Iran. Her entré? Company manager Farhad (Cas Anvar of TV’s “The Expanse”) has an eye for European women.

Yuval Adler’s script takes its time with this set up. Farhad is pushy, rude, creepy and bullying to women in a lot of those stereotypical Middle Eastern ways. At first. Rachel puts him on his heels, correcting his English at every turn.

She asks questions, and he warns her. That’s not safe in the Islamic Republic. Everybody keeps everything secret — their Ramadan diet (sneaking food), their drinking.

“Keep it secret…It’s a way of life here. Second nature.”

Even the insiders, those doing well, grate at a country that has “too many rules.”

In a flash, he’s taking her to an underground party filled with drinking, drugs, miniskirts and gambling.

“Your Ecstasy deal is also your alcohol dealer.”

The spycraft in “The Operative” — another simplistic, vague and over-used title in a summer of those — is solid. Rachel does a coded-channel version of Skype to send documents, befriends security guards, finds ways on her own to be of use to her handlers.

Also a plus, the spies themselves are callous, jingoistic jerks. Mossad is depicted as unconcerned about what it asks Rachel to do, ramping up her risks without regard to her growing value or increasingly tenuous situation. Why? She’s “not really Jewish” and she’s not Israeli.

“Little Drummer Girl” got there first, but then, Le Carre always does. 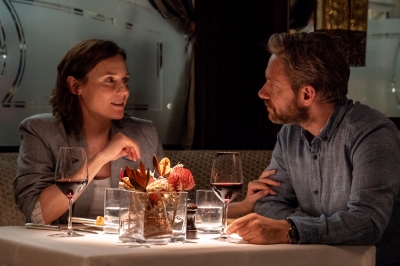 Freeman’s soft-spoken, testy intensity is much in evidence here, and Kruger — building a nice over-40 career in tough-minded thrillers like “In the Fade” and “The Operative” — gives Rachel brittle vulnerability masked by steely stoicism. Her paranoia never gets the best of her, but we never lose track of the fact that Rachel is human, facing moral dilemmas at every turn that would give a human being trained to be a spy pause.

Bourne and Bond rarely have such qualms.

Still, Freeman’s role is mainly as Mr. Exposition — peeling away the layers of Rachel’s psyche by remembering, in startling detail, her work career in Tehran. Anvar’s gullible businessman has only hints of the charm that is supposed to get into Rachel’s head as she performs her duties.

That’s the “Notorious” trap. No spy movie about a female agent can be without sexual lines crossed, romantic entanglements added for spice. It’s a cliché of the genre, and tends to muffle the drama’s impact and deflate its finale.

But for a genre picture, this one is better than average, letting us see what two fine actors saw in the script and not leaving them or us disappointed in the result.

Credits: Written and directed by Yuval Adler, based on the novel “The English Teacher” by Yiftach Reicher Atir. A Vertical release.