A movie about the young, curious and already-inventive Leonardo Da Vinci? That’s not a bad idea for a work of children’s entertainment.

But “Leo Da Vinci: Mission Mona Lisa” is a seriously undemanding if harmless realization of that movie pitch. The Italian production, with dated CGI animation, a voice-actors-only cast, a few limp songs and not much in the line of jokes or clever sight gags, is probably more suitable for small screens. That way the animated details don’t matter, and the film’s other shortcomings can be ignored as the kids watch in the car, at the laundromat or airport — any place “waiting” is involved.

This Leo (veteran anime voice-actor Johnny Yong Bosch) is a teen tinkerer, barely old enough to drive. That shouldn’t be a problem as, you know, it’s the 15th century.

But Leo’s always saying, “That’s my new invention,” and one of them is a combination wind-up roadster, sail-paddle wheel boat and glider he calls “The Barrel.” So yes, he drives, recklessly. And those Medieval roads!

His pal Lorenzo (Bryce Papenbrook) is always teasing him about neighbor girl Lisa (Cherami Leigh). She’s a long way from “Mona Lisa,” but Leo’s a sucker for a girl in Renaissance yoga pants.

We’re set up for a battle of intellects, because Lisa is “a know-it-all…she always thinks she’s right.”

But there’s no such empowerment in the script. She’s just his somewhat appreciative audience for The Barrel, his new diving suit, etc.

When her family’s farm burns, Leo resolves to help save Lisa from having to marry a foppish count to cover their debts. He’ll seek his fortune in Florence!

Only he falls for the old “shipwreck…treasure map” scam. He and Lisa, a tweenage pickpocket named Agnes (Faith Graham) and tween inventor Niccoló (Landen Beattie) are off to find it.

Lorenzo? He’s been kidnapped by pirates, who know a bit about Leo and his inventions. The lead pirate is fond of blue eye makeup. Must be Italian.

There’s a goofy rapped narration to a puppet show, pirates chanting in rhyme and a flippant electronic love ballad for Leo to sing through.

“When I am here with you, I am a fish inside a creek. And I don’t know how to speak. Maybe a mobile phone could help.” Or “you are far away, too far to run to you. Maybe a bicycle could help.”

Leo was WAY ahead of his time.

There’s a little education value here, as a character explains how eclipses happen. Leo takes on the role of myth-buster, briefly, debunking a feared ancient “monster.”

“Listen, in ALL my years of pirating, I never got hit by… (lightning, which then strikes).” 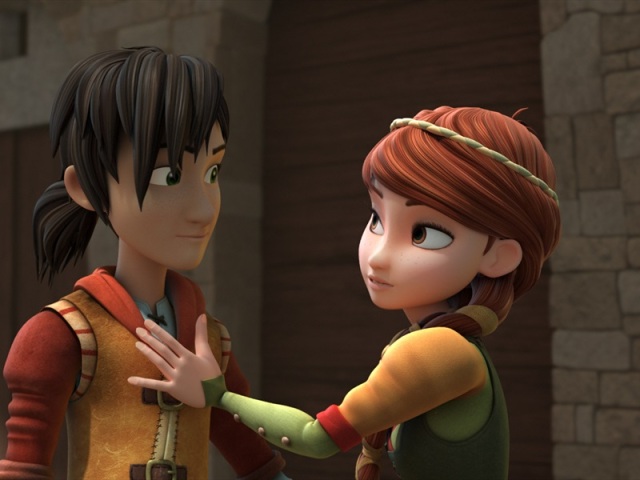 Every promising idea is introduced and forgotten.For instance, Agnes is a street urchin who speaks of herself in the third person, especially when she wants to invite herself along on their adventure.

“Agnes is alone in the world. Agnes just wanted a story she could tell her friends. Agnes never had any friends.”

The “twist” even a ten year-old could see coming.

The cleverest visual touch is a cut-out stick puppet adventure tale rapped out as street entertainment. The “Leonardo” touches are a first crack at the “Mona Lisa” (of teen Lisa) and a pre-adult riff on his Vitruvian Man study.

Does all that add up to a movie? Not for anybody over oh, six.

It’s not awful, and as I said, the conceit is a good building block for a film. Just not this one.