Movie Review: Vergara and Manganiello face the “Bottom of the Ninth” 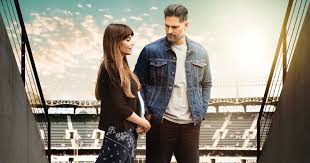 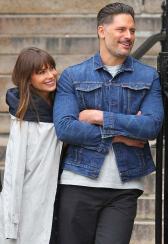 Husband and wife Joe Manganiello and Sofia Vergara star in “Bottom of the Ninth,” a “second chance” romance that get swallowed by the generic and generally dull baseball story it’s wrapped in.

Manganiello plays a ballplayer sent to prison for a deadly mistake he made in his youth, trying to start over again 18 years later when he gets out.

Vergara is the neighborhood girl he left behind, probably not reluctant enough (realistically) to reconnect with an old flame with horrific baggage, wracked by guilt and struggling to “grow up” after losing the promise of a life where he’d never have to.

Sonny Stano (Manganiello) was a Bronx kid who had it all back in the ’90s, a big swing and a big league contract. But a teenaged brawl ended that looming career with the Yankees. He turned his back on the game while in prison, doing nine years for (I’m guessing here) manslaughter or involuntary manslaughter, and nine more years “for just staying alive.” He had to fight and hurt others just to survive Sing Sing.

Getting out, going back “to the old neighborhood,” he figures out that there’s no forgetting, no making amends, no going back.

“Second chances are hard to come by,” the old friend (James Madio) who hires him to haul fish and run personal errands, says. Like everybody else, he’s tactless about “You were the king, once, remember Sonny? And “that kid whose life you took.”

Denis O’Hare (“Dallas Buyers Club) is the perfectly blunt parole officer, not sugar coating the “major league contract, and you blew it” past.

Michael Rispoli is the old Yankees coach, now minor league manager, who tries (inexplicably, I should add) to reconnect. Sonny’s not having it.

“Me and baseball? We’re done…I gotta grow up.”

But the petty indignations of the menial job — caddying is included — eat at the former baller.

The batting cage beckons. The sweet, beefy swing is still there.

And so is Angela (Vergara), the one he wanted to “move on with your life” back then, but still making him weak in the knees as a 40ish single mom/Spanish teacher. 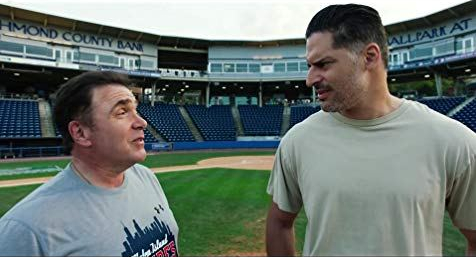 The problem signs with “Bottom of the Ninth” bubble up almost right from the start, a funereal “slow walk” back through the old neighborhood that make everything that follows seem enervated.

Director Raymond De Felitta did “City Island” with Andy Garcia, and his special gift to the cinema is stretching 65 minutes of story into 110 minutes of movie. Slow, leaden scenes, one right after the other, are the rule. The conflicts here are either lost in the editing, watered down or so abrupt as to seem ridiculous and out-of-the-blue.

The only hints of style are in the baseball scenes, extreme close-ups of what Sonny “sees” in the batter’s box, “reading” pitchers, what he might be able to teach the cocky Latino (Xavier Scott Evans) slugger who might say “I don’t have to listen to no sorry-ass ‘never was,'” but who has no idea how to hit big league pitching.

The love story follows a familiar path, but is shockingly lacking in sparks. I like these actors, but Vergara dials her on-screen bubbliness down so far as to be drab on screen. And Manganiello struggles to play meek, chastened and wounded.

He’s a big guy who shines when he swaggers, is self-aware of his “Magic Mike” beefcake and has a laugh with it. He’s a convincing hitter, but the character seems like a poor personality fit. Sonny’s a boring, brooding figure that isn’t a compelling reason to immerse yourself in his story.

But “Bottom of the Ninth” plays more like the “Seventh Inning Stretch,” a long pause between scenes where nothing much of consequence happens.

MPAA Rating: R for language throughout and some violence.