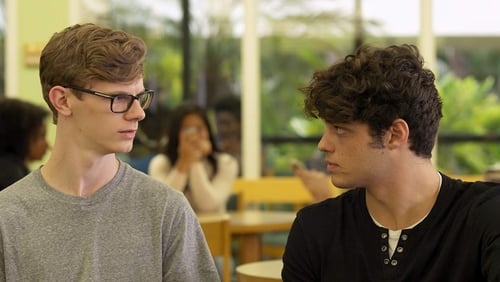 “Swiped” is about just what you think it is.

And if you thought it was impossible to make what is essentially a PG movie about “hook up” apps like Tinder/Grindr, you weren’t far off.

It’s an airless comedy about a college coding savant Winklevossed into creating a mating, “not a dating app” — for anonymous hook-ups.

A few of the usual Netflix suspects (Noah Centineo of “To All the Boys I’ve Loved Before” and “The Perfect Date”) are here, with Kristen Johnson of “Third Rock” and veteran funny/handsomeman George Hamilton (and wife Alana Stewart).

And the movie’s not about ANY of them. Writer-director Ann Deborah Fishman (“Marriage Material”) hangs her college copulation comedy on Kendall Ryan Sanders, who was good in “The Best of Enemies,” but is out of his comic depth wrangling this movie version of Sheldon Cooper into somebody funny.

James Singer (Sanders) is obsessed with this online “disruption” guru, and computers in general, and starting college at the only school divorced Mom (Leigh-Allyn Baker) and profligate, womanizing Dad (Steve Daron) could afford.

No, MIT isn’t in the Palm Beach area of Florida, the film’s location.

Lance’s callous attitude towards the fairer sex seems to be the rule on this campus.

But to Lance, the best hook up app “Hasn’t been created yet.”

“It would have to make it so a girl couldn’t find me afterward.”

James thus is tasked with developing “Jungle,” a narcoleptic dating app for a “woke” age.

Phones, as Wesley (Hutcherson) cruelly tells the fair and seemingly innocent Hannah (Shelby Wulfert) are now “a 24 hour portal to all the sex I could ever dream about. All I have to do is click.” Hannah’s “What’s your last name?” and Jane Austen-fixation of “dating” makes her “obsolete.”

Naturally, Hannah is James’ high school crush. But he keeps on developing “Jungle,” getting it up and operational, turning the tables on bully Lance by making him wait on him hand and foot as he does.

Guys, and a few more girls than you’d like, fall right into “Jungle.” Until the “no dating” part of the fine print hits them. No phone calls, no social niceties, no courting. Just lots of tears.

“Guys nowadays don’t date you,” one dismayed “conquest” notes. “They just sleep with you.”

James has his big change of heart when his sweet, lonely mother tells him and his bratty/pretty sister (Kalani Hilliker) she’s trying out this hot new app (which James takes no credit for). 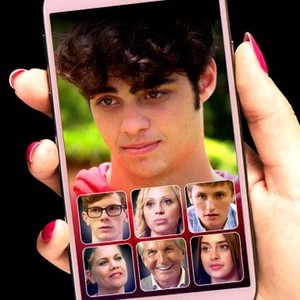 “Wipe that girl off your face, please.”

That’s almost a laugh, and it’d be the only one here.

A promising direction are the “first love, love of my life” chats with Grandpa (Hamilton), James polling and questioning people of Grandpa’s generation about dating and sex habits when they were younger.

Fishman can wring anything funny, deep or touching out of those.

The language of “Swiped” — it is named for the screen swipe you use on dating apps to eliminate candidates, or “choose” someone to see — is shockingly tame, considering the subject matter. the “love story” is about as romantic and convincing as the one involving the original version of Sheldon Cooper on TV.

Only Baker, playing a woman-of-a-certain-age getting treated like dirt on a “Jungle” date, manages any pathos.

As Netflix is making a name for itself with naughty rom-coms/sex-coms for teens, their acquiring “Swiped” is no surprise. What is surprising is how timid, unsexy and seriously unfunny it is. Whatever message about empowering entirely-too-compliant coeds into taking control of dating back from the creeps they’re dealing with may be worthy. It just needed to be in a sharper, funnier, more romantic or more overtly sexual package than this.