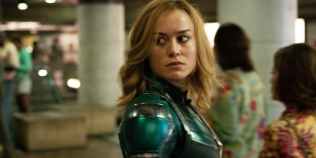 Liberated and liberating, “Captain Marvel” swoops onto the screen with baggage, expectations and a comic book bragging rights agenda.

It plays like an extension of that age old “Anything you can do, I can do better” Marvel/DC publishing grudge match, parked on the big screen. You’ve got “Wonder Woman?” Here’s “Captain Marvel.”

The films share female empowerment messaging, a Men Can’t Keep Me Down ethos,  stars with comparable charisma and a sense of fun. Oscar winner Brie Larson’s engaging turn in the superhero saddle has a generous dose of “The Marvel Touch” — flippant self-awareness, a tendency to hit the jokes HARD and effects that push the CGI envelope.

The story? Same old comic book righteous alien come to save us/war between aliens brought home to Earth stuff, filtered through the Avengers universe, leavened with lots of 1995 pop culture references and gags.

By the time Vers, of the planet Kree’s “race of noble warrior heroes” kicks butt and cleans house in a Nine Inch Nails t-shirt, choreographed to No Doubt’s “I’m Just a Girl,” the only proper viewer response is, “What TOOK you so long?”

As on-the-nose as it seems, as much as it drags through the middle acts, as often as Larson gives us the Badass Smirk through hair flopping over one eye, the just-over-two-hour film rarely stops in its tracks.

The twists in the plot are more feints than shocks, but pay attention to the double entendres, the several references to “The Right Stuff” and “Raiders of the Lost Ark.”

Watch the way Larson sprints. She’s Marion Ravenwood/Karen Allen redux — plucky, feminine and ungainly in ways no personal trainer could pound out of her.

Vers (Larson) wakes from a dream, the shattering end of a battle she lost. The blood is blue and the memory faint. Fortunately, as a member of the Kree, her deity — “The Supreme Intelligence” — is there to reassure her that she’ll figure this out.

As Ms. “Supreme” is played by Oscar winner Annette Bening (every Kree sees someone they “most admire” when they’re talking to God), we’re inclined to take her at her word.

Vers trains with her mentor (Law) who lectures that her sarcasm won’t take her far — “Humor is a distraction!” — and they set off with a team of warriors on an extraction mission. They’re to rescue a spy from the clutches of the green-blooded lizard shape-shifters, the Skrull.

The boss notes that “This is the perfect spot for an ambush,” so of course, that is exactly what happens.

Radio Shack jokes, Altavista dial-up Internet service gags, “grunge” and Garbage (“I’m Only Happy When it Rains”) on the jukebox, and damned if Vers doesn’t start to piece together a past that connects her with Planet C-53, aka “Earth.”

Perfect time for Nick Fury (Samuel L. Jackson, looking 30+ years younger) and this new guy, Coulson (Clark Gregg, even younger) to show up with some “questions.” It’s an even better time, it turns out, for the Skrull who were interrogating the captured Vers to wade up on a beach.

Their leader, Talos (Mendelsohn) insists that “She knows more than she knows” and that he’ll help them find whatever it is that will give them the edge in this war with the Kree.

As the S.H.I.E.L.D. guys try to follow “Blockbuster Girl,” whose uniform looks as if “she’s dressed for laser tag,” the Skrull shape-shift their way into that pursuit and the stage is set for the deal to go down.

You’ve got to give it up for the co-writers/directors Anna Boden and Ryan Fleck for wrestling the most complex and copyright-tetchy history of any comic book superhero into something manageable, if a bit ungainly  and heavy-handed.

An ex-Air Force pilot (Lashana Lynch) who has history with Vers shares in the slapbacks at male privilege packed into the story. And EveryVillain Mendelsohn gets to show off his comic chops to an almost nonsensical degree. Talos is impressed, for instance, with Vers’ lightning-bolt fists. But you do have to wonder how much “Friends” he’s been watching in his corner of the 1995 Universe.

“Miss Jazz Hands” he calls her, among many other colloquialisms and slips of slang. 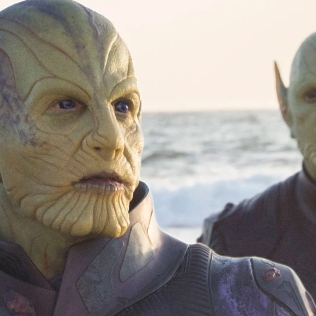 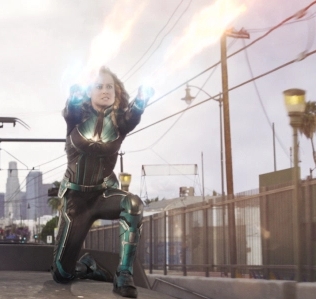 Jackson has reached the “Let’s make fun of every ‘one bad mutha’ this guy has played'” stage of his career. He doesn’t have a single serious scene in this movie, which never takes itself seriously. Fury has a weakness for pussy cats which we’ve never known. Until now.

Larson’s dead-weight appearance in “Skull Island” gave me doubts about whether she’d have “The Marvel Touch.” She’s no light comedienne, but she gives the film’s quiet scenes a nice gravitas even if she hits her punch-lines too hard and requires too many close-ups to squeeze in a smirking smile, hair blowing in the Deep Space breeze.

Gemma Chan, Lee Pace and the great Djimon Hounsou have barely enough to do in supporting roles to justify the staggering amount of makeup and costuming Marvel put them through.

Boden and Fleck, whose indie hit, “Half Nelson,” came over a decade ago, find laughs in the simplest places — even if they land on the raised eyebrow, double-takes and shrugs (when lizard-faced alien “science guys” do it, it’s hilarious) with both feet.

They’ve made a cute comic book movie, amusing but forgettable, probably not as culture-shifting as “Wonder Woman” and “Black Panther” turned out to be. But take your daughters to “Captain Marvel.” They’ll be the final arbiters here. Because Disney princess fans are the ones who’ll really be liberated by this rock’em sock’em role model.