Let us descend then, a stranger in a strange land checking in on the anime wonder that is “Dragon Ball Super: Broly.”

I am not a devotee, so I must approach this, the 20th anime film based on “Dragon Ball,” following multiple manga (Japanese comic books, often translated into English, where they sell quite well) iterations and more than one TV series that preceded the movies, as a non cult-member looking to be converted.

But that’s a fair approach, as movies, even those pandering to a very narrow audience, still have to stand alone.

And hell, I’ve seen the most recent Chinese film of “Journey to the West,” the fantastical ancient Chinese adventure tale that this Japanese story and media empire was inspired by. I won’t be utterly in the dark, right?

I didn’t find this latest variation on the “Broly” semi-sympathetic villain origin story hard to follow. But what confronts you when talking about movies like “Dragon Ball Super: Broly” is the gap between what hardcore fans expect and thus want from this, and what anybody who loves the medium of film and has an appreciation of narratives told with anime might reasonably expect it to deliver.

That gap’s a chasm with “Broly,” probably the widest release “Dragon Ball” cartoon (in the US), and judging from the two thirds full midday matinee showing I saw, certain to do passable box office no matter what critics might say. And there’s not much to say in its favor.

If, like me, you are a stranger in this corner of the culture, I offer this fine five and a half minute nerdsplanation/crash course from IGN linked below. Wikipedia’s a little help, too.

As a character shouts (Lots of shouting here. The film is, after all, Japanese — with English dubbing.) at one point, “What in the name of the MULTIVERSE is going on?”

The “dragon balls” are magical talismans, briefly releasing a dragon able to grant the owner any wish.

That makes them the sort of thing a universal megalomaniac named Frieza, son of King Cold, might want. He has enslaved much of the universe via his minions, Saiya warriors.

Frieza, a shrimpy mincing pedant (Think “Niles” on the TV show “Frasier”) loves four things — dragon balls, harnessing more power for himself, watching other folks fight and showing off his superior intelligence and vocabulary amongst his inferiors.

The film begins with a prologue getting the audience up to speed on that back story, the transfer of power and covetousness from Cold to Frieza, of the intergalactic infancy of Broly, dragged by his father to a planetoid where he can be safe from infanticide and perhaps grow up to become “The Super,” this tale’s version of a Messiah or “Chosen One.”

Frieza is hellbent on turning Saiya against Saiya, and the grown-up Broly can help him stir up the testy Prince Vegeta, the doofus wiseacre Goku and others.

If you drop into any of the online forums or even Youtube samples of “Dragon Ball” tales and comments on them, you get the idea that fans come to this densely charactered/thinly-scripted “multiverse” mainly for the fights.

“Dragon Ball Super” is both an origin story and a sort of re-boot. Broly has been in earlier tales, but as much as the other characters reference their “history,” his part in it has been excised to hit the never-ending story’s reset button.

The fights are animated in such a way as to be a series of dazzling, colorful pop art  action poses — punches thrown that hurl this character through a whole range of mountains or cause that one to plow up an entire glacier. The freeze-frame analogy works because in this corner of anime, the pronounced jerky movement of a Hayao Miyazaki “Spirited Away” or “The Wind Rises” is exaggerated. It’s under-animated.

Visually the stills are fine, but the animation is made-for-TV-pre-HD era quality — junky, cheap, with sparkle and light added, here and there. 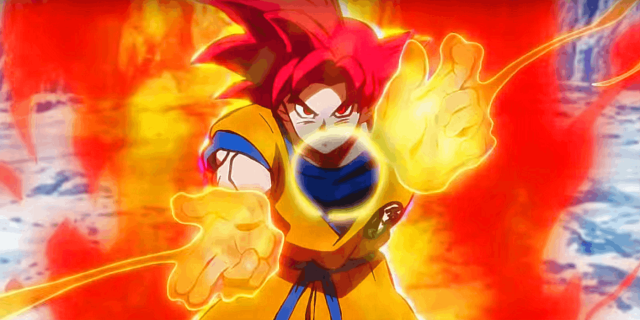 The characters are nonsenical, with endless variations of fantasy board, card or video game “new powers.” Nobody ever dies (at least not in this branch of the story).

Women and girls are all but invisible, here. And you think the West is patriarchical.

The jokes consist of drolleries by Frieza (again, Niles of “Frasier”) and little double-takes, familiar characters breaking from the narrow confines of their historical place within this universe. There’s a smidge of edge to the language — mild profanity — a hint of  homophobia (mincing stereotypes) and a literal demonstration of that word “homo” and “phobia,” as two characters must engage in an effeminate dance to achieve “fusion” and fight the bad guy. It repulses them. But they do it.

Seeing this without being a veteran member of its devoted audience is like dropping in on any “Never Ending Story” and trying to catch up, or stepping into a cinema in a foreign country and watching the local product without a firm grasp of the language.

Fortunately, for all the detail — characters blurt out reams of exposition and backstory — there’s virtually no “story” here at all. So I started concentrating on this sea of young males (Maybe 1% of the audience was female — the ladies all have day jobs?), mostly white, were getting out of it. Obsession with anything — Scrabble, Rubik’s Cube, orchids (and orchid thieves) and “My Little Pony” can be fascinating to observe and dissect.

The whole pop culture subgenre here — supernaturalism, epic flying “fights,” unkillable heroes, struggles for universal domination with your fists and energy bolts flying out of them, has the whiff of “junk culture” about it. It plays as part of that genre — Marvel movies that are all about the CGI “fights,” “Transformers/Power Rangers/Pacific Rim” piffle.

“Dragon Ball” doesn’t pre-date American comics, but connect it to its Chinese origin novel as inspiration as it feels like the Ur Text of this sort of epic brawls across the cosmos fantasy.

Every now and then, one of those movies takes a stab at being “about something.” Not here. It’s instantly forgettable to anyone who isn’t a fanatic lost in the minutia of their corner of junk culture.

But if it’s what the fans want, take comfort in the fact that at least they’re not “Bronies.”

MPAA Rating:  PG for prolonged frenetic sequences of action and violence, and for language