Movie Review: Kevin Hart surprises…just not that much — in “The Upside”

Comics who take the easy, broad gags are said to be reaching for low-hanging fruit.

Kevin Hart? He treats reachable, easy laughs like piñatas. He pounds the heck out of them.

“The Upside” gives Hart the chance to check his swing, just a smidge. He still pummels the laugh-lines and gets the most out of the comic bits. Comics are angry people, by definition.

But he surprises when he lets us see a sensitive side that his antic character comedies never do. The film is a manipulative drag, at times, entirely too obvious with the emotional tugs and try-too-hard laughs standing out more than they should. But Hart, Bryan Cranston, Nicole Kidman and others in the cast make it tolerable, more or less from start to finish.

It’s a remake of a not terribly ambitious but warm, bracing and accessible French comedy based on a true story, “The Intouchables.” Director Neil Burger (“The Illusionist”) leans heaviest on the sentimental elements of this story of a rich man rendered quadriplegic by an accident who hires a grumpy, unqualified and unempathetic ex-con as his caregiver.

The job description is “life auxiliary,” which the ex-con Dell (Hart) has never heard of.

“White people got a  name for everything!”

But he’s desperate to show his parole officer applications that demonstrate his job hunt, so he tags along to a penthouse interview with a score of other, more caring, more qualified and generally more insufferable applicants. Dell is bitter, estranged from his ex (Aja Naomi King, wonderfully bluff and blunt) and son. And he’s disconnected from society and the job market. All he wants is “proof” he’s job hunted.

Phillip (Cranston) is a grieving widower whose world has shrunk to whatever he can see from his bed or his mouth-controlled wheelchair. He suffers the attentions of his executive assistant (Kidman) only so long as she hears his demands that “DNR” get attached to every medical instruction.

That stands for “do not resuscitate,” for those who haven’t written their living will.

Phillip hires the rude, unqualified and unsentimental punk at least in part, we suspect, because surly Dell would let the him die. The way Dell flings “DNR your ass” around, we buy that.

Yvonne (Kidman) has to be bullsied into accepting the hire, and Dell has to be convinced to accept the offer. The designer bathrooms, expensive art on every wall, garage full of collectible cars and bookshelves full of first editions get his attention.

“I think your plantation is bananas,” he sneers, “but I ain’t  nobody’s servant.”

A big paycheck changes his mind. Along with the chance to drive the boss around in a Ferrari or Alfa Romeo, “running errands,” trying to win his son over and buy his way back into their lives by paying back child support in the process. 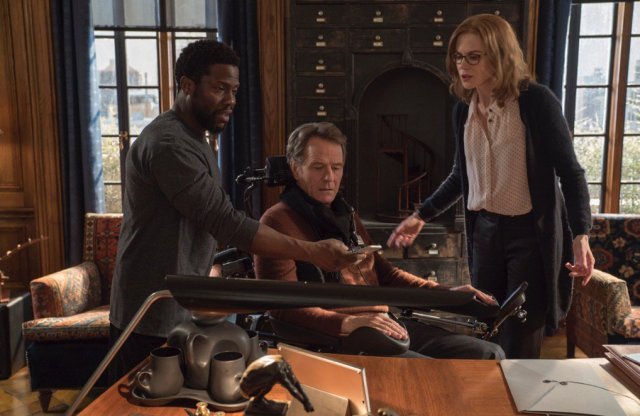 I’m always amazed when the well-heeled Hart can still summon up his inner “street” for a movie. The guy was a child actor, for Pete’s sake (“Freaks & Geeks”). The self-described “Little Man” does the chip on his shoulder thing well, and he makes Dell’s utter tactlessness with Phillip seem genuine and bracing.

“Don’t get up,” he says without thinking. A bet is secured the usual way, but without Phillip’s willing ascent. Not having the use of his limbs ensures that.

“You shook my hand!”

“You think THAT’s gonna hold up in COURT?”

It all gets to be a bit much, Dell’s wallowing in the lap of luxury (cars), Dell’s on-the-make efforts to hook Phillip up with a woman who will give him a reason to live — “How’bout Mrs. Botox, here? You’re perfect for each other. You can’t move your body, she can’t move her face.”

The story arc — the streetwise black man trying to bring a little Aretha into the rich writer’s life, giggling through the rich man’s operas until he starts to appreciate the vocal glories of Mozart’s “The Magic Flute” — is comfort-food familiar and predictable.

But Hart makes the laughs that the non-caregiver wrings from his first effort to replace a catheter fenuine and cringe-worthy. It’s no shock, given Hart’s recent run-ins with gay rights advocates, that he plays the “phobic” in “homo-phobic” in that scene with great comic conviction.

The upside of “The Upside” is that Hart’s fans will find just enough here to warrant the ticket price. But those on the fence about him thanks to his reaction to unearthed homophobic remarks he made and was slow in taking back won’t be as forgiving.

It’s a movie that swings too hard, tries too hard and sticks around too long to be an easy winner for the cinema’s hottest comic. But if you’re willing to see Hart try something new, with eager support from Cranston (Kidman is plainly slumming here), there are worse ways to spend two hours than watching Kevin Hart play a fellow who learns empathy and learns to love the opera.

MPAA Rating:  PG-13 for suggestive content and drug use

Credits: Directed by Neil Burger, script by Jon Hartmere, based on the French film “The Intouchables.  An STX release.