Posted on September 27, 2018 by rogerinorlando 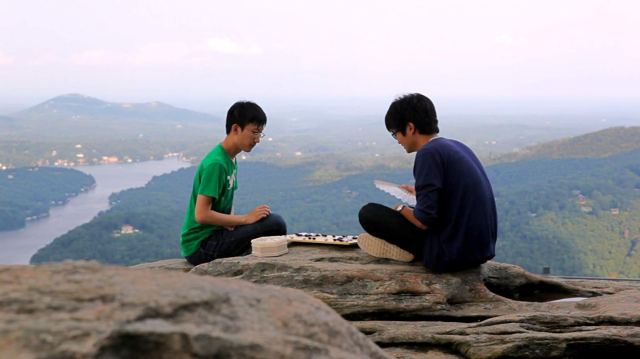 They must teach this in schools where filmmakers learn the art of making documentaries.

While there are many subgenres of nonfiction film — historic, sport, art, nature, biographical profile — one can’t-miss shortcut to getting your film made and seen is “obsession.” Find something esoteric that a corner of the culture is fanatical about and try to figure out why. Let its adherents — Scrabble players or orchid thieves, snake–handling Christians or pop singer Tiffany or Rick Springfield fans, any kind of collector — articulate that obsession.

“The Surrounding Game” is an intriguing look inside the world of Go, an ancient board game whose mostly Asian adherents — it was born in China thousands of years ago, and took Japan by storm 1200 years ago — proclaim has aesthetic and competitive advantages over chess.

But for all its popularity in the East, Go has never taken hold of the West. “The Surrounding Game” is about American efforts to popularize the game and select America’s first-ever professional-level Go players, who’d be the first in the Western world.

“The Surrounding Game” introduces us to guys like Andy Liu, who play the game practically non-stop, tournament competitors, veteran players patiently waiting for the rest of the country to share their passion, and one 20ish fanatic who ventures to a Go Academy in Seoul to study “with little kids” (in Asia, players start training for professional careers at five or six) to polish his game.

It’s a simple game played on a board covered with criss-crossed with lines. “Stones” are placed on intersections of those lines with two players, taking turns, playing their stones. A stone is placed once, and the object is to cut off your opponent’s stones by blocking every intersection around them.

Academics and other experts talking on camera speak of the game’s “aesthetic” in the ways it requires “a feel,” a board game where memorization and left brain mastery is important, but right brain “creativity” reigns supreme.

A famous endorsement from a chess grandmaster introduces “Surrounding Game” — “The rules of Go are so elegant, organic and rigorously logical,” Edward Lasker once said, “that if intelligent life exists elsewhere in the universe, they almost certainly play Go.”

We meet Terry Benson, president of the AGA, the American Go Association, and hear from him and others how close this small group has come to disappearing altogether over the years. They are Americans trying to “take something that is not a part of the culture and add it to the culture.” It’s an uphill climb.

Frank Lantz, professor of game design at NYU, discusses the “subtlety” of the game, with its myriad variations and outcome possibilities. Legendary pros from China and Japan talk of the years it takes to master it, and assorted Americans marvel at how reaching each level in the hierarchy of Go makes you realize “I know NOTHING.”

We glimpse Asian tournaments and take in the rituals — players bow, sit on knee chairs and play at a low game table made from a solid block of yew wood — and visit the craftspeople who cut and age the wooden tables, covering them with hashmarks, and others who drill out fossilized giant clam shells to make the most expensive “stones” high-end players play with.

The history is covered, we learn of the vast skills of the great Go Seigen, a Japanese master whose contemporaries said he “didn’t seem human.”

We check back in, now and again, on players like Andy Liu and Ben Lockhart (Go fanatic Will Lockhart co-directed the film) and gauge their progress toward their ultimate goal. 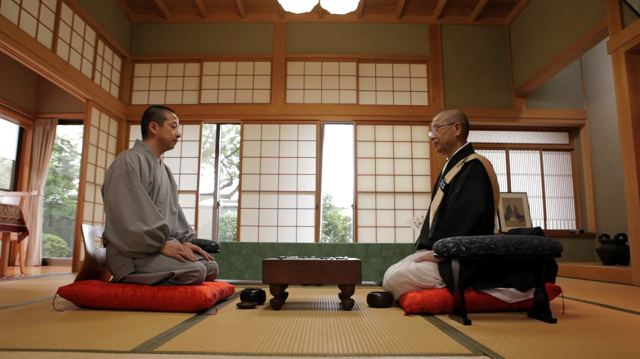 The various Asian experts, historians and masters do their best to give the game that
“inscrutable” quality that the East likes to imprint on Western interlopers. The game is like “the rings of the tree” you can see in the most valuable, hand-cut boards, one craftsman waxes philosophically. Legend has it that the simple game was a way of making sense of the infinite night sky in ancient China.

“The board is a window to the human mind. It reveals what’s inside us.”

And the Americans put their imprint on it — competitiveness, and our other national obsession, a yen to “follow your bliss,” even if you don’t measure up to the challenge.  Other Americans marvel at the way life’s cares, clutter and distraction melt away while playing it.

“Time just melts away,” one adherent notes. “You learn to come to terms with your own imperfections.”

Go is not being Westernized, it is Easternizing at least some of its Western fans.

The film has a lot of airline miles to it, and a lot of history and Asian aesthetics packed into its scenic 95 minutes. There’s a spare quality to the visuals, music and quiet of co-directors Will Lockhart and Cole D. Pruitt’s movie that seems to mimic the experience of playing the game, elegant ritual and minimalist design meeting in a mental contest.

Co-director Lockhart doesn’t acknowledge any connection to competitor Ben Lockhart, which seems a cheat (No relation? Brothers? Married?). And I can’t say I’m sold on the game itself, which seems fun but inherently less interesting than chess or poker.

Mastery of Go is made to seem particularly daunting.

But “The Surrounding Game” accomplishes what it set out to, explain the obsession its most enthusiastic adherents share. It’s playable on computer (computer programs can now beat the best players), and should real money get behind it, it’s hard to see it not catching on here. Eventually.

Credits:Directed by Will Lockhart, Cole D. Pruitt. A Moyo/Netflix release.

2 Responses to Documentary Review: Will America go mad for “Go,” “The Surrounding Game?”