It’s no stretch to think of “Orange is the New Black” star Taylor Schilling as a kidnapping victim who has little trouble turning the tables on her captor.

She plays native cunning well, and carries herself, even in a show about prison, with the confidence of a pretty blonde.

But “Take Me” takes that tables-turning thing to a new extreme. A darkly comic pre #MeToo riff on dominance/submission games and control, it’s got enough twists (barely, it’s quite predictable) and laughs (ditto) to get by, largely thanks to Schilling lording it over her would-be kidnapper, played by Pat Healy of “Cheap Thrills” and “Compliance.”

Healy directs and stars in this comedy, and he’s an amusingly deadpan, hapless-but-doesn’t-realize-it lead.

Adorned with a terrible toupee that makes him look like John Michael Higgins, we meet Ray as he’s making his pitch to a bank loan officer.

“I run a business based on one idea, helping people.”

This business requires the use of a rusted Chevy van, rope, duct tape, stocking caps and threats. He kidnaps people who hire him to do it. And his pitch to the lender for expanding “Kidnap Solutions, LLC,” his “simulated experience of high stakes abduction” service, is a lulu. It can be therapeutic.

Want to lose weight and cut out the junk food? Nothing like the terror of being a hostage and having fast food shoved down your throat to fix that.

But everybody who hires him has a different motive, which he doesn’t go too deep into. No sense offending the prudes, you know. And that little lawsuit in Atlantic City? Learning curve for the business, nothing more.

Ray doesn’t get the loan, but at his most desperate, he gets a client. “Anna” calls, wants more than the “eight hour” standard experience, and is willing to pay handsomely for it. She asks to be slapped around, the works. Ray, a mild-mannered soul in spite of his choice of profession, has to be talked into it.

But he is and she’s his — for the weekend, grabbed in her LA consulting firm’s parking lot, stuffed into the trunk of her Mercedes and spirited off to his basement.

Anna (Schilling) is taken aback, taken utterly by surprise. But is she…terrified? We wonder. Ray isn’t much of an actor. Maybe he’s just not menacing enough.

“Are…are you wearing a wig?”

But as she begs not to be shoved in the trunk and weeps just enough upon their arrival, as she flings a bar of soap at him in one escape attempt and stabs him in another, we wonder exactly what we’re supposed to wonder.

Is Anna actually in on it, or has guileless, inept Ray been tricked into kidnapping a woman who isn’t actually a client?

The whole movie hangs on Schilling’s ability to con us, and Ray, repeatedly and that’s a little lacking.

What she’s good at is being the mean “victim” — correcting Ray’s grammar, questioning his intelligence, mocking his toupee.

The whole slapping thing? “You hit like a GIRL.” 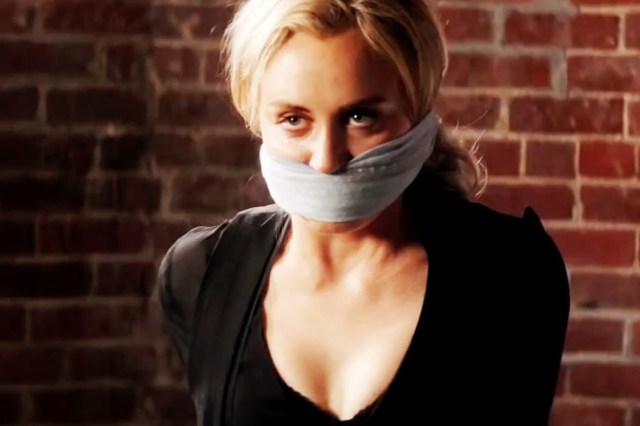 Healy is funniest at his most hapless, coaching himself in the mirror before making fresh threats to his “victim,” lying on the fly to cops who show up at the door, coping with the sister (Alycia Delmore) who disapproves of what he does for a living, but not enough to free Anna or call the cops.

The mystery evaporates too quickly, but the war of wills — or war of will vs. wuss — has a few laughs in it as Ray takes a licking from the tough blonde tied to a lawn chair.

And there are a couple of cute twists that pay off. The Duplass Brothers produced this, and while “Take Me” doesn’t have the edge or scruffy, improvised energy of their best work, it’s on a par with their lesser early “mumblecore” efforts, which at least have their moments.

The stars? They’re game, which considering  the film’s subject matter, says something. It’s not nearly as out there as it looks, not remotely as alarming as it might have been (Alicia Silverstone’s “Excess Baggage” went further, and it was just a lightweight rom-com).

But “Take Me” tickles just often enough to be worth its 84 minutes, not something I’d trek out to see at the cinema, but perfectly Netflixable.