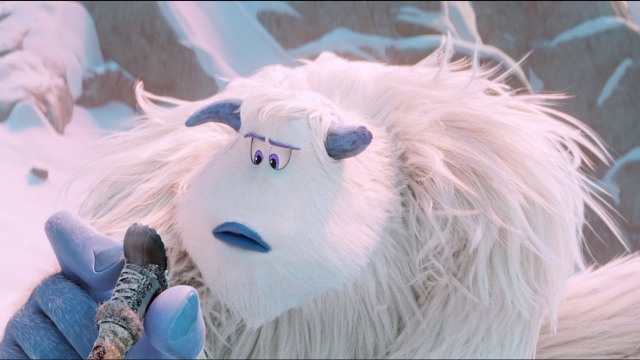 It’s hard not to oversell “Smallfoot,” the new bigfoot musical from Warners Animation.

Because words like “joyous” and “profound” (almost) leap to mind at several points in this Warners Smart/Pixar Heart comedy.

Yeah, you’ve seen the trailers, maybe shrugged. Maybe your kids did, too.

And for half an hour or so, the movie’s a lightly engaging goof, starring Channing Tatum as a singing, questioning Yeti who encounters a creature of legend, high up in the Himalayas where he and his kin live — a SMALLfoot!

We’ve been introduced to Migo’s mountain-top world, a village above the clouds whose rituals include the job young Migo is destined to take over from his father (Danny DeVito), the guy who rings the gong that tells the sky snail of light to begin its trek across the horizons, bringing another day to all the Yeti.

Without that gong, how would the snail know when to bring light? Without the phalanx of mammoths, what would keep their mountain balanced on the edge of the heavens?

Without the Stonekeeper (Common) interpreting the Holy Stones of his coat, how would they know they’re alone in this world, that there’s “nothing” below, that “Smallfeet” do not exist and that “Ignorance is bliss?”

See, this is where things get INTERESTING, in that sort of Big Questions about Life, the Universe and all.

Migo’s culture has a comically deep and deeply superstitious -and myopic view of the world. The Stonekeeper pooh-poohs his “sighting.” Everybody breathes a sigh of relief at this, embracing another “perfect day” in bliss.

That’s when Migo meets the Smallfoot Evidentiary Society, people who have artifacts — evidence and theories to go along with it.

And unlike their myth-swallowing, unquestioning superstitious peers, they think the Stonekeeper is Mr. Coverup and his coat of illustrated life lessons and rules stones is bunk.

As Meechi sings, “All we are is curious, there’s nothing wrong with that.”

That’s when they decide Migo must go and fetch proof. And that’s how he meets the desperate for ratings, “integrity” free TV wildlife show host (James Corden), and the Yeti learn that Smallfeet have a few scary legends of their own, of “monsters” with fur and horns and teeth and feet big enough to ski on. 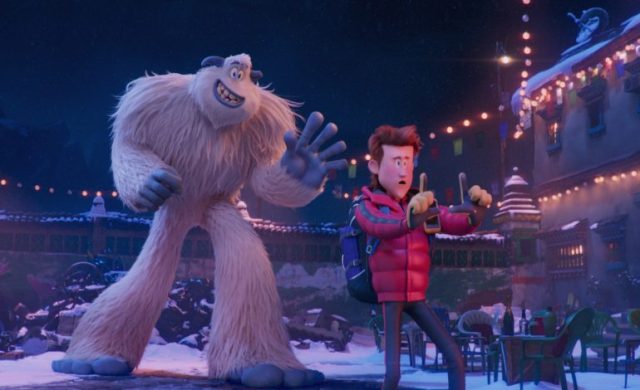 So what we have here is a movie puts fact and science in opposition to fear, ignorance and superstition. The team of “Smallfoot” screenwriters take pains to not say “religion,” but they both criticize it and recognize its place in culture and history.

None of this repetitive baby formula “We are family/families stick together” Pixar messaging (save for “Wall-E”) here.

When Meechi sings “A life that’s full of wonder is a wonderful life,” she’s suggesting science, fact and discovery open the world up instead of closing it in. When she argues that their way of thinking is “not just about tearing down old ideas, it’s about finding new ones,” she’s making a case that only the most backwards school boards would reject.

But then the Stonekeeper sings and raps (the Oscar-winning Common’s first career) “Let it Lie,” a brilliant rhymed summation of religion, tradition, myth and society where we learn “the only thing stronger than fear is curiosity,” which is why these outliers are such a threat.

“Smallfoot” picks up steam, and the gags — good, from the start — rise to the brink of hysterical. Corden’s kidnapped TV host Percyis hauled off in a makeshift baby sling, is zipped into a sleeping bag that turns him into an inchworm and the reason Migo and other Yeti find the smallfeet “so cute” and “adorable” is because when humans speak, they’re heard as a gurgling baby gibberish. Who can resist baby talk?

Tatum has a lightly pleasant singing voice, as he demonstrated briefly in “Hail, Caesar!” And since getting James Corden to NOT sing is harder than the contrary, Percy gets a showstopper all his own, capturing all the desperation for ratings and “viral” success, the ethics of making “fake news” to do it and what Percy is willing to do to pay his mortgage in “Percy’s Pressure,” karaoke sung (and danced) to the tune of the Queen/David Bowie hit.

For all that subtext, there’s not a lot of edge to this, nothing deeper than “humans hunt everything and are to be feared.” I’d have made the Stonekeeper a Scar (“Lion King”) of dogma, a villain. Probably didn’t “test” well. The edgiest joke is the legend that the Giant Sky Yak “pooped” the Yeti into this world, as if that could ever happen.

But “Smallfoot” is still a delight, a jokey-smart cartoon that enlightens and teaches even as it entertains. Because we need to learn that sometimes there really are monsters “out there,” and sometimes, the monsters are us.

MPAA Rating:PG for some action, rude humor, and thematic elements